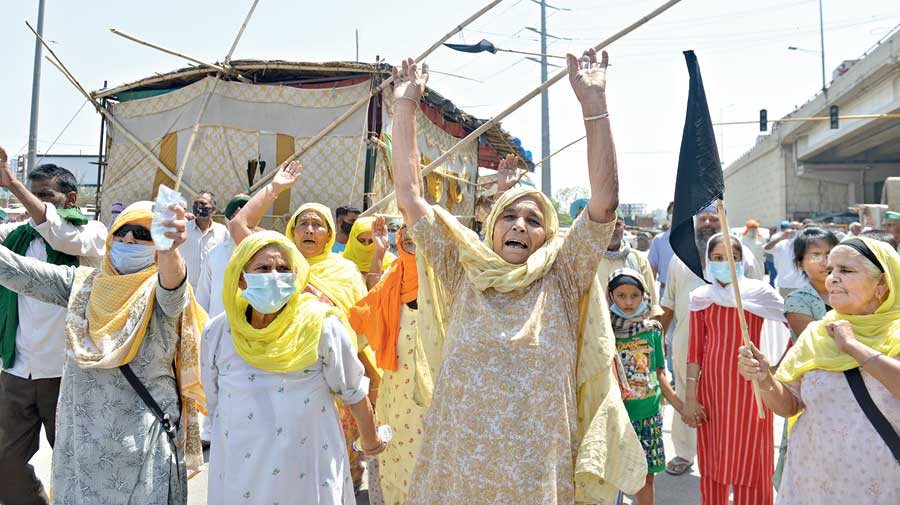 "Farmers and leaders from Punjab, Haryana, Rajasthan, Uttar Pradesh and even from distant states like West Bengal, Chhattisgarh and Karnataka are arriving at the borders of Delhi to participate in the protest.
File picture
Our Bureau, Agencies   |   New Delhi   |   Published 13.07.21, 10:23 PM

The Samyukt Kisan Morcha (SKM) on Tuesday said that it will press the opposition parties to ensure that the farmers' demands on the three new agriculture laws and MSP are addressed in Parliament before any other business is transacted during the upcoming Monsoon session.

The umbrella body of over 40 farmer unions that is spearheading the agitation for the scrapping of the central agriclture laws said the preparation for their planned protests at the Parliament from July 22 is in full swing.

"Farmers and leaders from Punjab, Haryana, Rajasthan, Uttar Pradesh and even from distant states like West Bengal, Chhattisgarh and Karnataka are arriving at the borders of Delhi to participate in the protest.

"As planned by SKM, the protest will be planned and executed methodically and peacefully, with 200 farmers participating in the protest every day," it said.

The SKM said that any attempt to stop the farmers from protesting "will be illegal and unconstitutional".

The amalgam said it will issue letters to all the opposition MPs of Lok Sabha and Rajya Sabha on July 17 as a precursor to the protest on July 22, "demanding that they raise the demands of the farmers in Parliament and ensure that these demands are discussed and met before any other business is transacted in Parliament," it said.

Farmers, mainly from Punjab, Haryana and western Uttar Pradesh, have been camping at Delhi's borders for over seven months. They are demanding a rollback of the three contentious agriculture laws and also seeking a legal guarantee for Minimum Support Price (MSP).

Most of the opposition parties have openly supported the farmers' agitation.

The three laws - The Farmers' Produce Trade and Commerce (Promotion and Facilitation) Act, 2020, The Farmers (Empowerment and Protection) Agreement of Price Assurance and Farm Services Act, 2020, and The Essential Commodities (Amendment) Act 2020 - were passed by Parliament in September last year.