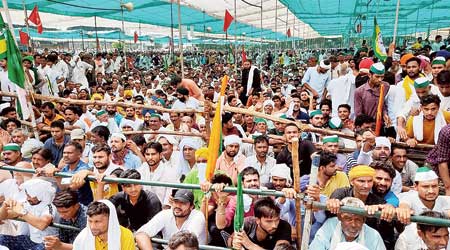 A day after more than five lakh farmers gathered in Muzaffarnagar and vowed to defeat the BJP in the coming elections if it did not repeal the three farm laws, the party cited an online poll to claim Narendra Modi was the “most popular global leader”.

The survey in India covered 2,126 respondents.

BJP spokesperson Sambit Patra also hit out at Rahul Gandhi for a tweet he had posted in support of farmers. “Dataa hai, nidar hai, idhar hai Bharat Bhagya Vidhaata. (The maker of the country’s destiny is firm, is fearless and is here),” Rahul had posted with a picture of a farmers’ rally and the hashtag  #FarmersProtest.

“Today, Rahul Gandhi has once again resorted to politics of illusion. He has tweeted an old photo of the farmers’ protest to show the present picture,” Patra said.

The BJP’s IT department head Amit Malviya tweeted: “That Rahul Gandhi has to use an old picture to claim success of the Mahapanchayat just shows how the propaganda to call it a well attended ‘farmer’ agitation hasn’t worked.” He suggested that the picture was from a February meeting.

That Rahul Gandhi has to use an old picture to claim success of the Mahapanchayat just shows how the propaganda to call it a well attended “farmer” agitation hasn’t worked. It is political. With religious slogans raised, it leaves no one is doubt, what the actual motivation is! https://t.co/lzXKEupqos pic.twitter.com/oqZioPm8u4

Rahul had neither referred to the Mahapanchayat nor put any date to the picture, which only showed a crowd at a rally. On Saturday, when he had tweeted a picture from the gathering at Muzaffarnagar, he had tagged it #Muzaffarnagar Kisan Mahapanchayat.

Rashtriya Lok Dal chief Jayant Chaudhary responded to Malviya’s tweet, saying the photograph posted by Rahul was from a farmers’ meet organised by his party in Shamli and asked what the BJP leader had to say.

“Friends, on one side is Rahul Gandhi and on the other side is Hindustan’s pradhan sewak Narendra Modi. The kind of place he has achieved among the people of the country and in the world is unparalleled,” Patra said.

The rating has been given by Morning Consult, a US-based private company, that tracks the approval ratings of leaders of 13 countries on a weekly basis.

Its online sample size in India was 2,126 respondents.

Patra said Modi had emerged as the “vishwa ke sabse chahete leader” (most loved global leader) among the heads of state of 13 countries.

“Be it Joe Biden or Germany’s Chancellor Merkel, if there is one leader ahead of them in the world then it’s PM Modi,” Patra said.

He said Modi’s approval rating had increased from 66 per cent to 70 per cent because of the government’s service towards the poor and the farmers.

The BJP leaders have gone all out to use this rating to underscore that Modi’s popularity remains unaffected by the farmers’ protest and privately claim that the party will retain both Uttar Pradesh and Uttarakhand despite the efforts of the Opposition.

“The farmers’ agitation is a politically motivated campaign against Modi ji,” a BJP leader said.