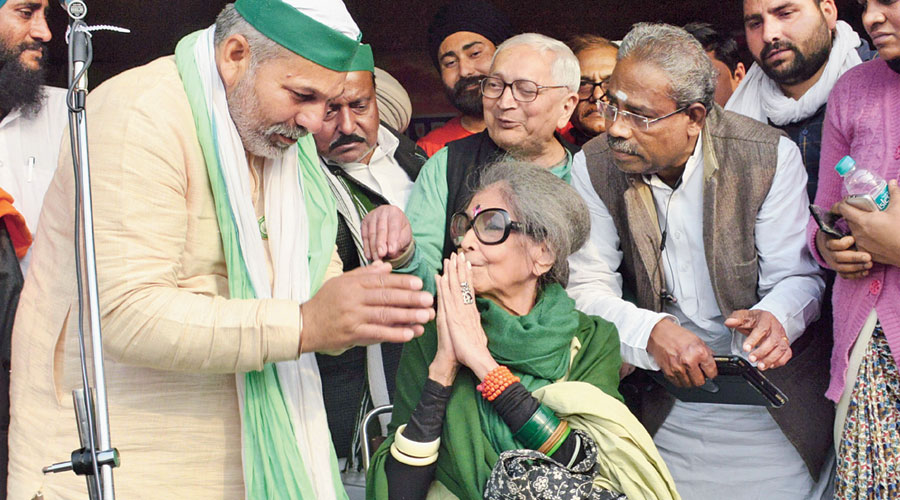 Mahatma Gandhi’s granddaughter Tara Gandhi Bhattacharjee visited the protesting farmers at Ghazipur on the Delhi-Uttar Pradesh border on Saturday. Bhattacharjee, 84, chairperson of the National Gandhi Museum, exhorted the farmers to remain peaceful in their protest and urged the government to take care of the farming community.
(PTI picture)
PTI   |   New Delhi   |   Published 14.02.21, 02:28 AM

Protesting farmer unions on Saturday demanded a high-level judicial inquiry into the violence during the tractor rally in Delhi on Republic Day and the allegedly “false” cases slapped on peasants.

Addressing a media conference at the Singhu border, Samyukta Kisan Morcha leaders asked farmers who are getting police notices not to appear before the force directly and instead approach the legal cell constituted by the unions for any assistance.

Kuldeep Singh, a member of the SKM’s legal cell, said a retired judge of the Supreme Court or high court should probe the incidents to unravel the “conspiracy” behind the January 26 violence and the alleged “false cases” against the farmers.

According to SKM leaders, 16 farmers who had participated in the tractor parade are still untraceable. During the Republic Day chaos, over 500 police personnel had been injured while a protester died.

On January 26, a section of the protesting farmers who had reached ITO clashed with the police. Many farmers drove their tractors to the Red Fort and entered the monument, where a religious flag was hoisted.

At the news conference, another farmer leader, Ravinder Singh, said 122 farmers had so far been arrested by Delhi police in connection with 14 of the 44 FIRs, adding that the SKM would provide legal and financial aid to all the arrested farmers.

The SKM leaders claimed that “false” cases were being slapped on farmers, charging them with serious offences such as dacoity and attempt to murder to “harass” them.

“Ten farmers have been granted bail so far and five bail applications have been filed. Priority is being given to those farmers who are not booked under Section 307 of the IPC (attempt to murder) or other serious offences,” the SKM said in a statement later.

Ravinder Singh said the SKM would provide Rs 2,000 to every arrested farmer to be spent in the prison canteen.

An SKM legal team had on Friday visited the Tihar jail where 112 farmers are lodged, he said.

The union leaders have requested Delhi Jal Board vice-chairman and senior Aam Aadmi Party leader Raghav Chadha to ensure that the farmers are kept in one jail.

In the statement, the SKM demanded that its legal panel be allowed to meet the arrested farmers without any restrictions and that its monetary help be disbursed among them.

“The SKM legal panel has strongly condemned the Delhi government and the police for issuing notice under Section 160 CrPC to the farmers in order to rope them in false cases,” the statement said.

Under this section, an investigating officer can through a written order direct any person to present themselves before him or her if it appears that the person is acquainted with the facts and circumstances of a case.

“We have not come here as part of any political programme. We have come here today for the farmers, who have fed all of us our whole lives,” the Bharatiya Kisan Union (BKU) quoted Tara Gandhi Bhattacharjee, Mahatma Gandhi’s graddaughter, as saying during her visit to the Ghazipur protest site on Saturday.

Delhi police’s crime branch on Saturday took actor-activist Deep Sidhu and another accused, Iqbal Singh, to the Red Fort to recreate the events that had unfolded at the monument on Republic Day during the farmers’ tractor parade, a police officer said.

Sidhu, according to the police, was a “prominent player” in the violence and vandalism at the Red Fort.