A year since farmers braved water cannons and pushed past boulders

A timeline of the farm movement 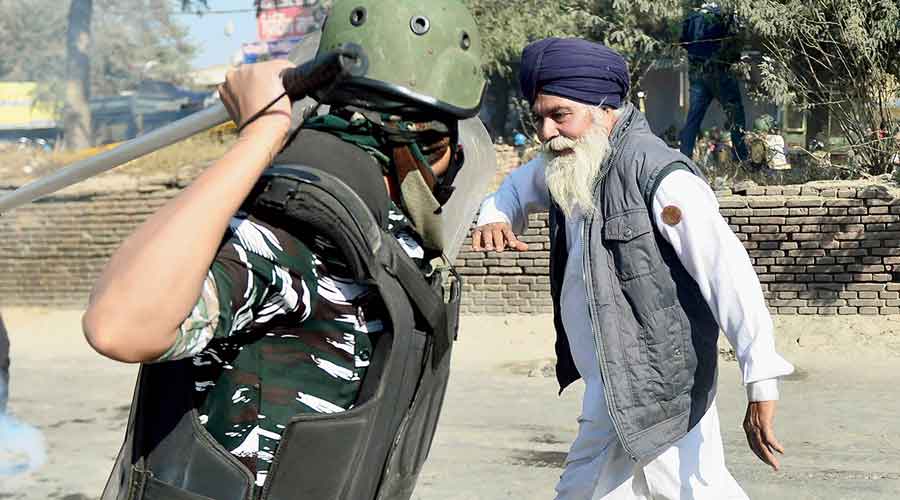 A security person raises his baton to hit an elderly farmer during the Delhi Chalo march against the farm laws on November 27 last year.
PTI file picture
Anita Joshua   |   New Delhi   |   Published 20.11.21, 02:31 AM

Come November 26, it will be a year since farmers braved water cannons and pushed past boulders placed on Haryana highways by the state’s BJP government to stop their march to Delhi to make themselves heard by the Narendra Modi government.

The Centre had ignored their protests to ram through three farm bills in Parliament. But the protests pre-date the Dilli Chalo call by at least five months. A timeline of the farm movement:

June 5, 2020: The Modi government promulgates three ordinances — the Farmers’ Produce Trade and Commerce (Promotion and Facilitation) Ordinance, the Farmers’ (Empowerment and Protection) Agreement on Price Assurance and Farm Services Ordinance, and another one to amend the Essential Commodities Act. Together, the trio dilute the controls on sale, pricing and storage, which have insulated farmers for long from free market forces.

August 2020: Protests begin in Punjab against the farm bills, for a law guaranteeing minimum support price (MSP) and withdrawal of the Electricity Bill.

A farmer takes part in the Delhi Chalo protest at the Singhu border on December 8 last year.
PTI file picture

September 20: The farm bills are cleared by the Rajya Sabha in a much-contested vote that the government pushes through amid considerable support for the Opposition demand to refer them to a select committee for closer scrutiny.

September 26: The Akali Dal quits the NDA over the farm laws.

November 7: 40 farmer unions from across the country form the Samyukta Kisan Morcha, which has spearheaded the protests through a collective le-adership mechanism. The SKM gives the Dilli Chalo call for November 26 — the day when the Constitution was adopted in 1949 — and November 27.

November 26/27: Farmers begin reaching Delhi’s borders, braving water cannons and boulders. They pitch tents on Delhi’s outskirts after refusing the government’s offer to allow them to proceed to the Nirankari Sangam Ground.

December 1: The first in a series of negotiations between farmer union leaders and the Centre is held at the level of the agriculture minister, a process that saw at least 10 rounds during which the government first offered amendments.

December 8: A Bharat Bandh sees workers align with farmers in what became a template for future mobilisations that saw the coalition broadening to other sectors.

A child lights candles at the farmers’ protest site at the Singhu border on Friday.
PTI photo

December 12: Union home minister Amit Shah steps in to lead the negotiations for the government to no avail.

January 12, 2021: The Supreme Court stays the implementation of the farm laws and appoints a committee to resolve the stalemate. The farmers had already announced they would not participate. Now they harden their position as all members of the committee are in favour of the farm laws.

January 21: The government offers to suspend implementation of the laws for a couple of years; the farmers reject it.

January 26: Farmers hold a tractor rally in Delhi but incidents of violence at a couple of points and storming of the Red Fort by a group of protesters put the SKM on the back foot. It calls off the tractor rally midway.

January 27: The government begins to crack down on the farmers.

January 28: Farm leader Rakesh Tikait breaks down in full view of farmers during the crackdown, turning the tide of the movement that had been demoralised by the government narrative on the incidents of violence. Since then the movement has gone from strength to strength with farmers being extra cautious during any mass mobilisation.

April/May: The SKM actively campaigns against the BJP in the Assembly elections without supporting any party.

October 31: Four farmers are mowed down in Lakhimpur Kheri by a Thar jeep owned by Union minister Ajay Mishra Teni and with his son Ashis allegedly in it. This spreads the farmers’ movement, which till then had been confined to the western region when it came to Uttar Pradesh, to the Terai region of the state. It further triggers the already agitating farmers of the Terai region in Uttarakhand, poll-bound like Uttar Pradesh.