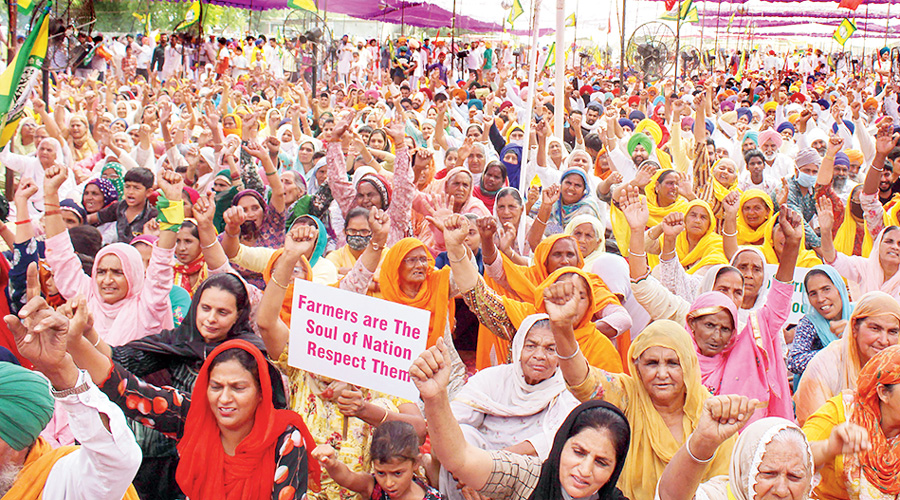 Farmers protesting against the three new farm laws on Monday gave a “Phir Dilli Chalo” call, announcing a return to the protest sites on the capital’s borders at a time there is a worry the Narendra Modi government might try to cite the pandemic as a reason to forcibly evict the protesters.

Arrangements are being made to beef up medical facilities at the protest sites to deal with coronavirus, spread mask awareness and organise vaccination camps in line with government regulations.

Briefing mediapersons at Delhi’s Singhu border, Ashish Mittal of All India Kisan Mazdoor Sabha said the call to return to the protest sites will be given for April 24, the 150th day of the protests. This mobilisation will continue for a week.

The All India Kisan Mazdoor Sabha is a part of the Samyukta Kisan Morcha, under whose banner farmers from across the country are protesting against laws that they see as their “death warrant”.

The mobilisation at Tikri border will begin even earlier, on Wednesday, as Bharatiya Kisan Union (Ugrahan) — which is not part of the Morcha umbrella but coordinates with it — has given a call for returning to the protest site on April 21.

The protests at Delhi’s borders, which began on November 26 last year, had thinned over the past month because farmers had to return to their fields for the harvest. The harvest season has now ended and the mobilisation being planned is also aimed at ensuring a large participation for the march to Parliament scheduled for the first fortnight of May.

The march was planned before the second Covid surge engulfed the country.

Yogendra Yadav of Jai Kisan Andolan, another member of the Morcha, took a dig at the Prime Minister’s “aapda mein avsar (opportunity in a calamity)” call and said the government thinks that because they could do it once, they can do it again. The reference was to the Shaheen Bagh protests, which were lifted when a lockdown was imposed during the Covid surge last year.

“This movement is different,” Yadav added, warning that a crackdown on the protests would be counterproductive.

Mittal, Yadav and Zafar Mewati of the Bharatiya Kisan Mazdoor Union pointed out how on a day the Prime Minister advised against large gatherings at Kumbh, he spoke glowingly about the large size of the crowd at an election rally in Bengal.

On Saturday, when over 2 lakh new coronavirus cases were reported in the country, a visibly elated Modi had told the rally in Asansol he had never seen such a big crowd.

The farmer leaders billed Modi’s advice on the Kumbh as “pakhand’’ (hypocrisy). Despite Modi’s call, the Kumbh continues.

“The government’s hypocrisy on coronavirus has been exposed. Ministers and leaders have been holding election rallies. They have no right to question others,” Yadav said.

The leaders also pointed out that although the farm protests had started way back in June last year, when the government brought the laws as ordinance during the lockdown, until now no Covid hotspot had been reported from any farmer protest site.

The farmers had protested from June to November in their own states, seeking a rollback of the three laws. When these went unheeded, they arrived outside Delhi on November 26 and have stayed put, spending a harsh winter in the open and braving a hostile government.