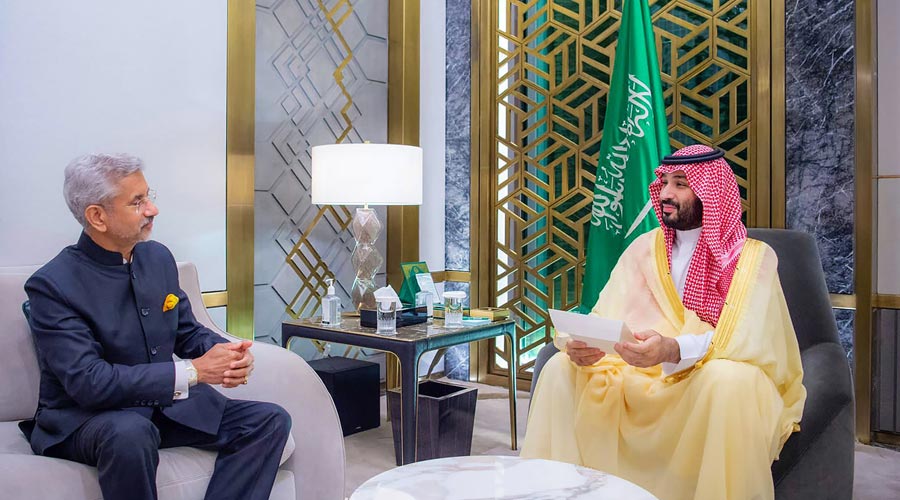 External Affairs Minister S Jaishankar has called on Saudi Crown Prince Mohammed bin Salman and handed over a written message from Prime Minister Narendra Modi and apprised him of the progress in bilateral ties.

Jaishankar arrived in Saudi Arabia on Saturday on a three-day visit to discuss ways to further strengthen relations between the two countries. It is his first visit to Saudi Arabia as External Affairs Minister.

He met the Saudi Crown Prince in Jeddah on Sunday.

During the meeting, bilateral relations between the two countries and opportunities for enhancing them were reviewed and the latest regional and international developments, as well as the efforts being exerted towards them, were discussed, it said.

"Honoured to call on HRH Crown Prince Mohammed bin Salman in Jeddah this evening. Conveyed the warm greetings of PM @narendramodi. Apprised him of the progress in our bilateral relations. Thank him for sharing his vision of our ties," Jaishankar tweeted after the meeting.

Earlier on Sunday in Riyadh, Jaishankar held "warm and productive" talks with his Saudi counterpart Prince Faisal bin Farhan during which they discussed current global political as well as economic issues and agreed to work closely together in G-20 and multilateral organisations.

They co-chaired the first ministerial meeting of the Committee on Political, Security, Social and Cultural Cooperation (PSSC), established under the framework of the India-Saudi Arabia Strategic Partnership Council.

The approximately 2.2-million-strong Indian community is the largest expatriate community in the Kingdom, according to the Indian embassy in Riyadh.

The top leadership of both countries remained in close touch even during the Covid-19 pandemic, the External Affairs Ministry said in a statement.