Exit polls predict win for BJP in UP, AAP in Punjab 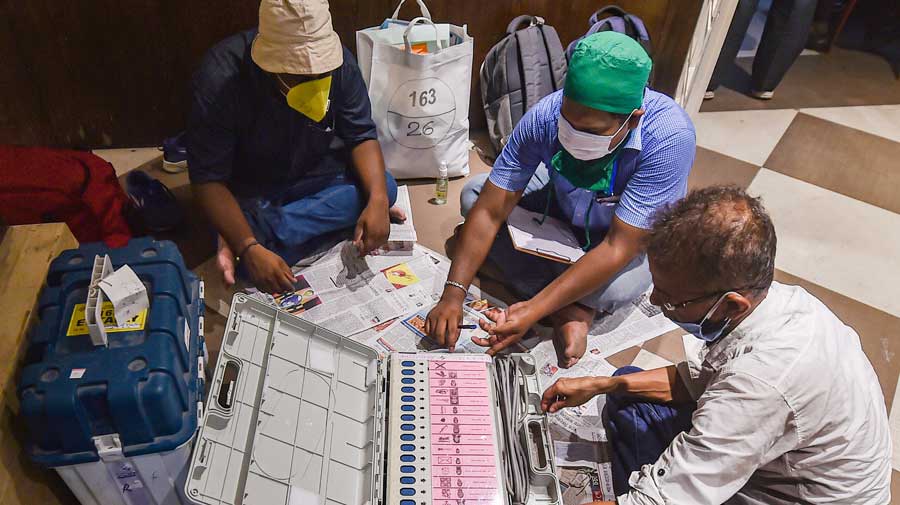 Most of them were also unanimous in predicting a big win for Delhi Chief Minister Arvind Kejriwal-led AAP in Punjab, with one exit poll on India Today projecting up to 76-90 seats in the 117-member assembly.
File picture
Our Bureau, PTI   |   New Delhi   |   Published 07.03.22, 07:28 PM

Several exit polls forecast a clear majority for the BJP in Uttar Pradesh and the Aam Aadmi Party in Punjab while being mixed in their predictions for Uttarakhand.

However, Samajwadi Party chief Akhilesh Yadav, in a tussle with the Yogi Adityanath government in UP, dismissed the pre-poll surveys and claimed that the ruling party will be wiped out from the state when the results are declared on March 10.

Exit polls on CNN News 18, Republic TV and News X channels showed the BJP-led National Democratic Alliance (NDA) getting 211-277 seats and its main challenger in the Samajwadi Party-led alliance getting anywhere between 119 and 160 seats in Uttar Pradesh. CNN News 18 predicted 262-277 seats for the BJP and allies and 119-134 for the SP and allies in the 403-member state assembly.

Most of them were also unanimous in predicting a big win for Delhi Chief Minister Arvind Kejriwal-led AAP in Punjab, with one exit poll on India Today projecting up to 76-90 seats in the 117-member assembly.

TV9 Bharatvarsh-Polstrat, however, predicted 56-61 seats for the AAP in Punjab, making it the frontrunner.

The ruling Congress was mostly predicted to be securing the second spot in Punjab.

In Uttarakhand, Both the Congress and the BJP were favored by different exit polls to win the assembly polls. Some exit polls predicted a hung assembly in Goa while forecasting the BJP to have an edge over rivals in Manipur.

SP chief Akhilesh Yadav sounded confident of winning the UP assembly elections and 'wiping out' BJP from the state.

"Let them show whatever they have got. We are winning with a majority," he said, dismissing predictions earlier on some TV channels.

He claimed that the SP-led alliance will form the next government in Uttar Pradesh with over 300 seats.

The SP chief slammed the ruling BJP for presenting lies and fake data during the campaign and said people had realised this and instead voted for their future -- against inflation and unemployment and for growth.

At the receiving end of the BJP attack on "pariwarvad" throughout the polls, Yadav hit back, claiming that the maximum cases of dynastic politics are found in the ruling party.

"After the seventh and final phase of polling, the BJP will be wiped off from the state. The SP alliance is forming a majority government after March 10 with over 300 seats," Akhilesh told PTI at his party's state headquarter here.

Uttar Pradesh has a 403-member House.

Results of the UP polls would come out on March 10, along with those from Punjab, Uttarakhand, Goa and Manipur.

"I was there with them. We were prepared in advance. We held training camps, took out rath yatras, response to which was tremendous. It rejuvenated the party cadre and enthused party workers, who wholeheartedly worked to ensure victory."

"This will be a victory of the voters," he said.

The SP supremo held over 120 public meetings across the state to drum up support for his party as well as for the alliance partners.

About the BJP, he said, "The party forgot the dignity and decency of democracy. It did not value the votes it got (in 2017, 2019). It used bulldozers, used abuses against students and got them lathi-charged. It was all against the common man."

On charges of "pariwarvad", or dynastic politics, levelled against him by Prime Minister Narendra Modi and other BJP leaders during the campaign, he claimed, "The BJP is the party where there is maximum 'pariwarvad'."

He claimed that had Chief Minister Yogi Adityanath's uncle not been a part of the Gorakhnath math', he wouldn't have had the chance to be there and also get into politics.

He mentioned Union minister Jyotiraditya Scindia as an example of a member of a political dynasty. He also indirectly referred to Defence Minister Rajnath Singh and former chief minister Kalyan Singh, who children joined politics.

Attacking Union Home Minister Amit Shah, he said, "His son is in the cricket board (BCCI). What qualifications does he have?"

Yadav alleged that BJP leaders lied to people on inflation, unemployment and issues related to traders and farmers, who he said laid down their lives while protesting against the agri laws.

On the PM's remark linking the SP's bicycle' symbol with the cycles used by terrorists in the 2008 Ahmedabad blasts, Yadav said the common man uses them. The PM realised his mistake and except for the one meeting never mentioned this again."

When asked about his priority if he gets the chance to form the next government, the SP leader said. "I am waiting for the results."