Elderly farmer at Ghazipur pledges to protest till law repeal 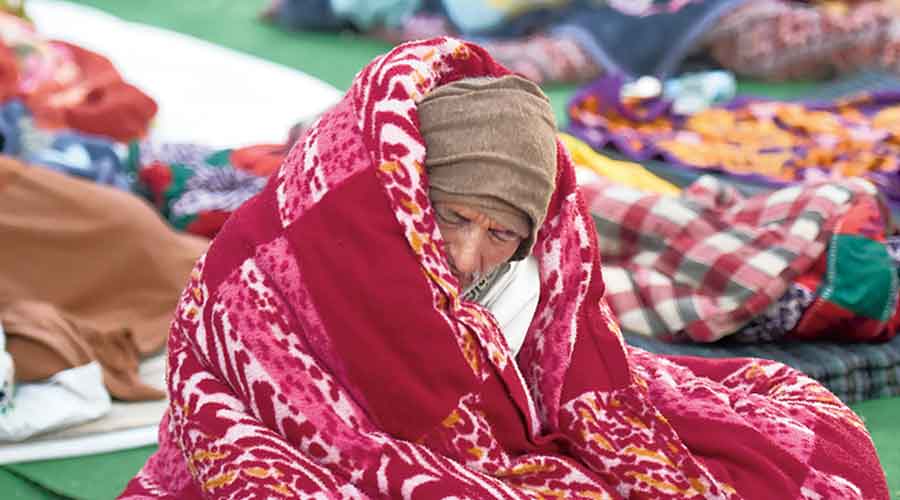 Unlike his two sons, Ilam Singh has never been in the army. Now, at the age of 97, he is ready to take a bullet.

“Pehli goli hum khayenge, lekin ab yeh andolan nahin rukega agar krishi kanoon wapas nahin liya (I shall take the first bullet, but this movement will not stop until the farm laws have been repealed),” the Jat farmer from Muzaffarnagar told reporters at the Ghazipur protest site at 2am on Friday.

He and many other protesters were up at that unearthly hour in the biting cold because a build-up of security forces had triggered rumours of an impending attack on the gathering of 50,000 people. However, the government reinforcements were withdrawn on Friday morning.

He was referring to the propaganda in the electronic media about the farmers “insulting the national flag” on Republic Day, when a group from the tractor rally had stormed the Red Fort and hoisted the Sikh pennant Nishan Sahib.

Ilam, who had joined the two-month-old dharna on January 26 and taken part in Tuesday’s Kisan Parade, is being looked after by two middle-aged companions from his village. However, one of them had his right arm broken by the police during the tractor rally, the nonagenarian alleged.

He said he would be up all night “to monitor everything and boost morale” in the face of a momentary confusion about the future of the Ghazipur protest.

On Republic Day evening, the Yogi Adityanath administration had asked the protesting farmers at Ghazipur, Ghaziabad district, to leave and had cut off power and water. Currently, the protesters are bringing water on their tractors and have arranged for solar lights and large batteries.

However, a piece of miscommunication about something that BKU (Tikait) president Naresh Tikait had said in Baghpat on Thursday resulted in a rumour that the dharna was being called off.

Ilam said the langars that had been functioning round the clock for over two months suddenly began closing at 11pm on Thursday. But a couple of hours later, everything was back in place.

“Any farmer or reporter who needs food or tea can visit our langars. There is free service. We have also made arrangements to charge the batteries of mobile phones and cameras,” Ilam said.

“We have arranged for makeshift washrooms too. We have enough bedrolls and quilts for lakhs of people.”

Told that the protesters now risked losing popular support because of the hoisting of the Nishan Sahib at the Red Fort on Republic Day, Ilam echoed the farmer leaders’ allegation that it was a government conspiracy to defame the movement.

“Chowkidar wahin baitha tha aur chori ho gayi (The watchman was there and yet the theft happened),” he said.

Farmer leaders have said there was heavy police and paramilitary deployment in and around the Red Fort but the personnel just stood and watched as a group approached the high-security structure and raised the pennant.

The police are also accused of allowing — if not misdirecting — some tractors to veer off the designated route and approach the ITO, and then cracking down on those following the vanguard’s lead.

Ilam said he wasn’t sure whether his tractor had violated the assigned route but said one of his two helpers was beaten up about half a kilometre from the ITO and had his right arm fractured.

“The central government’s agents created the ruckus at the Red Fort under the supervision of the paramilitary forces. And Modi’s baton left many farmers injured,” he said.

“Such treachery is strengthening our commitment to our children that we will not let the government control the way we farm.”