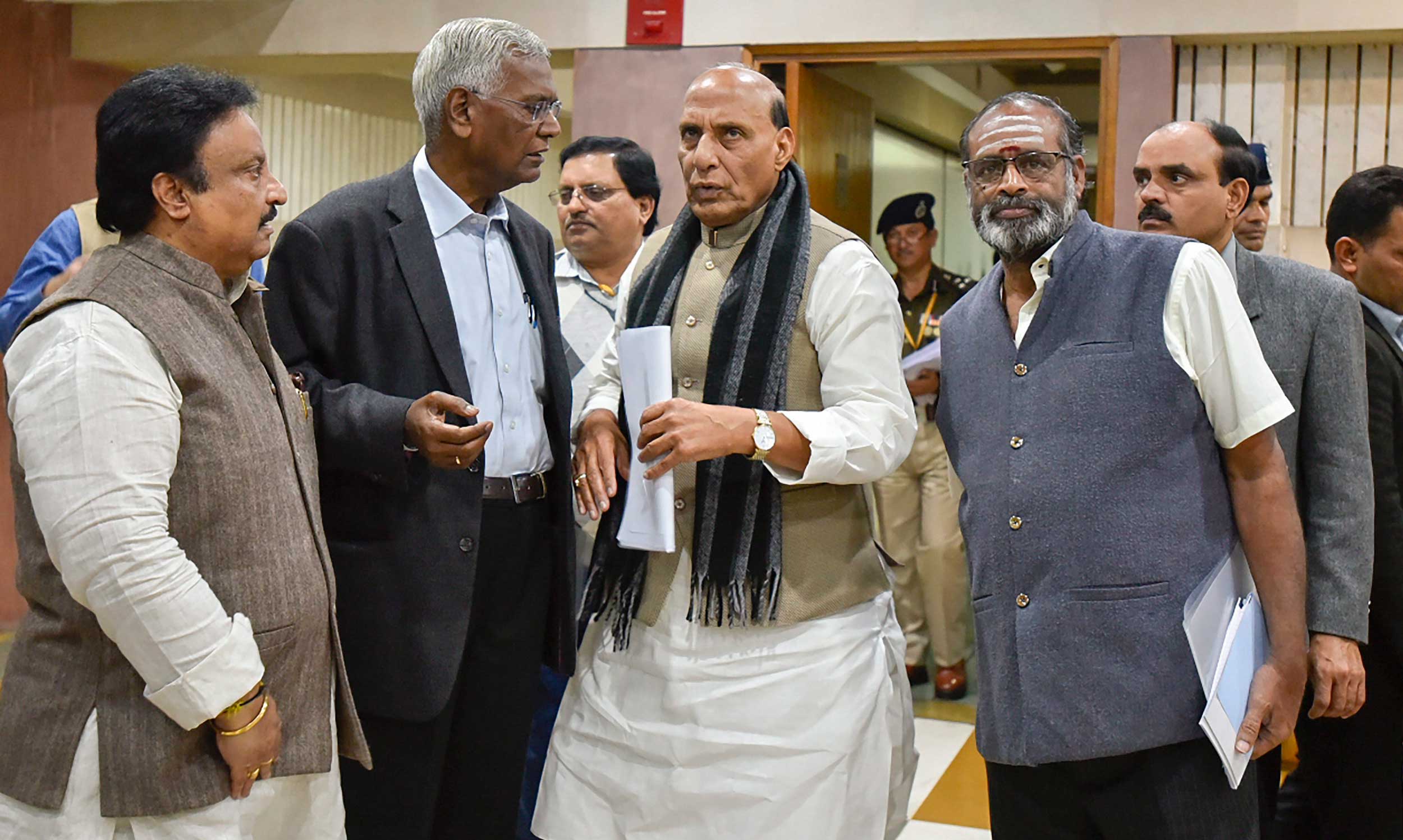 All political parties on Saturday extended support to the government in firmly tackling the situation arising out of the Pulwama terror attack and expressed solidarity with the security forces.

Although there were many voices of concern at an “all-party” meeting over the government’s handling of the Kashmir issue over the past couple of years, the leaders decided not to put them on record at this critical juncture.

The overriding sentiment was that the message that should go out must be about unity and commonality of purpose. The meeting was chaired by home minister Rajnath Singh while the Prime Minister was away in Maharashtra addressing public rallies.

Sources revealed that the government had come up with a draft different from the resolution eventually passed at the “all-party” meeting. Some Opposition parties got the draft altered as they didn’t want the focus to shift from the security forces.

The initial draft of the resolution had this line but it was dropped: “Today, we all resolve to stand with our security forces and efforts of the Central and State governments to ensure that these challenges are suitably and firmly responded to.”

Apart from the Centre, the state is under the control of the Modi government as Jammu and Kashmir is under governor’s rule now. The line was hence removed as leaders stressed that the resolution should be above partisan projections.

The resolution passed at the meeting said: “We strongly condemn the dastardly terror act of February 14, 2019, at Pulwama in Jammu & Kashmir in which lives of 40 brave jawans of CRPF were lost. We, along with all our countrymen, stand with their families in this hour of grief. We condemn terrorism in all forms and the support given to it from across the border.”

The resolution added: “India has during the past three decades faced the menace of cross-border terrorism. Of late, terrorism in India is being actively encouraged by the forces across the border. India has displayed both firmness and resilience in dealing with these challenges. The entire nation speaks in one voice to express its determination to fight these challenges. Today, we stand united in solidarity with our security forces in fighting terrorism and in defending the unity and integrity of India.”

Many leaders pointed out the deficiencies in the Modi government’s Kashmir policy and how the situation worsened under the failed BJP-PDP coalition.

Former Jammu and Kashmir chief minister Farooq Abdullah warned against a majority-versus-minority rhetoric and asked the government to protect Muslims and Kashmiris. His son Omar Abdullah met home minister Rajnath Singh and conveyed his party’s concern over Kashmiri students being targeted in many states.

Several leaders supported Farooq’s argument that the government should come up with a comprehensive policy to deal with terrorism as well as Pakistan.

While the Akali Dal requested the government to concentrate on options other than war, Shiv Sena leader Sanjay Raut said passing resolutions were not enough and the government should now take action. Raut recalled that resolutions had been adopted after the Pathankot and Uri attacks too.

The Prime Minister’s absence at the meeting was noted by a few leaders. Congress leader Ghulam Nabi Azad wondered why presidents of political parties had not been invited for such an important meeting. Azad said the meeting should have been called by the Prime Minister and all top leaders like Rahul Gandhi, Sharad Pawar, Mamata Banerjee, Akhilesh Yadav, Mayawati, Chandrababu Naidu and others should have been invited.

Although the Prime Minister is attending government programmes, he has been freely talking politics. On

Friday, while addressing rallies in Uttar Pradesh, the Prime Minister had thanked people for giving majority to the BJP and sought their blessings for another term. He has been extensively dealing with the Pulwama attack in his rallies.

On Saturday, Rahul addressed a public rally in Chhattisgarh after suspending political programmes on Friday.