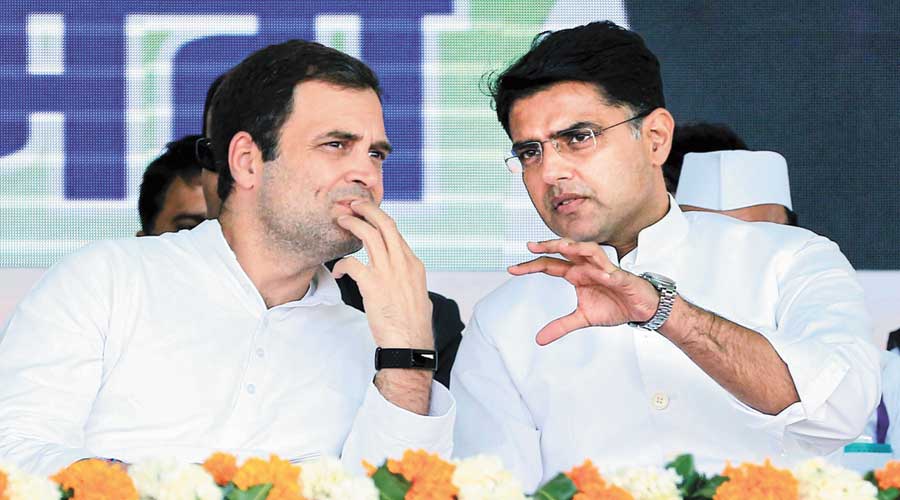 Sachin Pilot on Monday met Rahul Gandhi in a dramatic turnaround that could bring down the curtain on the vicious internal war in the Congress that had jeopardised the party’s government in Rajasthan.

At night, Pilot told the media that he had raised certain issues with the party leadership and thanked it for hearing him out.

He had been talking to a few top Congress leaders, including Priyanka Gandhi Vadra, over the weekend to explore whether reconciliation was possible at this late stage. He finally visited Rahul’s home on Monday afternoon to discuss his grievances.

A broad understanding has been reached on the return of the rebels although the issues will take time to resolve.

Late in the evening, the general secretary in charge of the All India Congress Committee, K.C. Venugopal, said in a formal statement: “Sachin Pilot has met with former Congress president Rahul Gandhi and expressed his grievances in detail. They have had a frank, open and conclusive discussion. Pilot has committed to working in the interest of the Congress party and the Congress government in Rajasthan.

“Following this meeting, Congress president Sonia Gandhi has decided that the AICC will constitute a three-member committee to address the issues raised by Pilot and the aggrieved MLAs and arrive at an appropriate resolution thereof.”

Priyanka, Venugopal and party veteran Ahmed Patel are on the committee.

Pilot and 18 other MLAs had rebelled against the Ashok Gehlot-led government in Rajasthan, which led to Pilot’s sacking as deputy chief minister and state party chief.

Asked if the crisis was finally over, a senior leader said: “Nothing is final in politics until it is done but Rahul would not have met Pilot without a broad understanding about a patch-up. We expect the MLAs to return to Rajasthan soon. Whatever issues are there can be resolved mutually. We have been saying this publicly from the very beginning. It’s good that the Pilot camp has realised its follies now.”

Sources said it had been decided that the Pilot camp would not set conditions but efforts would be made towards an honourable rehabilitation. While the rebels’ main demand — the removal of Gehlot as chief minister — is not on the table any more, no decision has been taken whether Pilot will return to Rajasthan as deputy chief minister.

The leadership is aware of the irreconcilable differences between Gehlot and Pilot.

Insiders believe the Pilot camp’s change of heart was forced by two factors — the inevitability of the Gehlot government’s survival and the cracks in the rebel group.

A leader told The Telegraph from Rajasthan: “There was extreme unease in the rebel camp and six MLAs were in touch with us. These MLAs were willing to defy Pilot as the impression that they were destabilising the government in connivance with the BJP had made them uncomfortable. They assured us they would vote for the government on the trust motion.”

Even Pilot, who had initially expected to have 30 MLAs on his side, got unnerved by the fortification made by the Gehlot camp and his failure to lure away certain MLAs he had thought were loyal to him.

Gehlot, fully backed by the high command as manifested through the constant presence of Congress leaders Randeep Surjewala and Ajay Maken in the Jaipur and Jaisalmer hotels, has prevented further depletion of the flock. He is also said to have successfully worked on several BJP legislators who would have propped him up if there was a shortfall in numbers.

While the BJP’s most powerful leader in Rajasthan, Vasundhara Raje, appeared unexcited about the toppling game, the doubts about the loyalty of some MLAs had forced the party to take them to Gujarat.

This, coupled with the behaviour of six MLAs in the Pilot camp, had deepened the impression that the government would sail through the crisis, rendering the rebellion meaningless. Had six MLAs betrayed him, Pilot would have been left hamstrung with an uncertain political future.

That the Congress has agreed to accommodate him after such a rancorous politico-legal battle in which the BJP clearly got involved indicates two things — one, the central leadership has made a pragmatic assessment of the fate of the state government; and two, the high command values Pilot both emotionally and politically.

Gehlot was obviously not willing to compromise. He got a resolution passed at the legislature party meeting on Sunday night suggesting the rebels’ votes were not needed for the government’s survival.

Although Pilot, who had indisputably a bright future in the Congress, will now struggle to regain his clout and may have to grapple with a trust deficit for some time, both Rahul and Priyanka are said to favour his rehabilitation being made comfortable.

If he does not immediately return to Rajasthan politics, he will be given the post of national general secretary. If he returns to Rajasthan, he is unlikely to regain both the posts of state unit president and deputy chief minister.

A key rebel, Bhanwarlal Sharma, who had been suspended from the party, had already arrived at the chief minister’s home in Jaipur on Monday evening. Sources said six more MLAs would reach Jaipur by late night irrespective of the final deal with Pilot. Sharma was Gehlot’s bitterest critic.