Attempts are made to establish and propagate dangerous and controversial things in the name of freedom of expression, says the defence minister 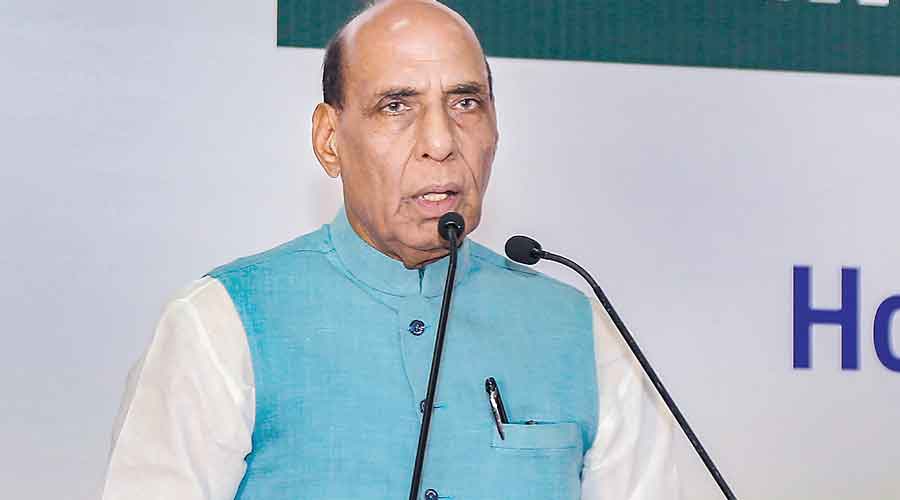 Defence Minister Rajnath Singh on Monday said it has become increasingly difficult to differentiate between external and internal security threats as hybrid warfare has almost eliminated this distinction.

"The situation has become even more complicated as the latest technological advancements have expanded the nature of threats to national security," Singh said while addressing the second convocation of the Rashtriya Raksha University at Lavad in Gandhinagar district.

Singh also said social media, NGOs, the judiciary and the democracy of a country can be misused by forces working to destroy its security.

New kinds of threats are coming to the fore which have blurred the line between internal and external security. Besides terrorism, cyber war and information war are the new forms of security threats.

"In addition, there are problems like human trafficking and money laundering which are different in appearance, but are related to one other. All the agencies must work in an integrated manner to deal with these challenges," Singh said.

"The government has adopted a holistic approach to strengthen all aspects of national security," he said.

National security encompasses the security of land and sea borders, air space, cyber, data, space, information, energy, economy and environment and it is essential for a sovereign nation to safeguard these elements. India is well equipped to deal with all security challenges, he added.

Stating that India always withstood invasions and threats to national security, Singh said there is a need to outgrow the impact of slave mentality which has undermined the country's rich tradition of self-defence and security.

Lauding Prime Minister Narendra Modi for making India the fifth largest economy of the world, Singh said the country has the potential to become the largest economy by 2047.

"An independent social media can be used to carry out systematic propaganda. Freedom of social media is not bad, media should be free, but if media is free it can be misused...Attempts are made to establish and propagate dangerous and controversial things in the name of freedom of expression," he said.

"If NGOs have freedom, efforts are made to use NGOs in such a way that the entire system of the country is paralysed. If the judiciary has freedom, efforts are made to use it to stop or slow down the works of development using the legal system. If a country has a dynamic democracy, then an effort is made to infiltrate political parties to attack its unity and security," Singh said.

Singh cited media reports which said that 50 per cent of tweets in connection with the case of violence at Koregaon-Bhima in Maharashtra's Pune district in 2018 originated from Pakistan.

It becomes difficult to determine when the definitions of terrorism and insurgency/extremism overlap and their objectives become one, he said.

"Terrorism is coming up with massive challenges in every dimension of the system and not just at the level of bombs and guns, he said.

"Information warfare" is about the possibility of fake news and hate content being spread in society through Facebook and WhatsApp, Singh said.

"Outwardly it appears like some serious discussions are being held in a seminar, but it is not the truth. Internally, there is a possibility of spreading deceptive and wrong facts that can fill any society with hate and violence," the minister said.

He said anti-social elements are "so fast and advanced" that even police agencies are deceived, and they cannot make out what is going in front of them.

"We have to remain alert of new security challenges...As new technologies develop, so are their dangers. We must understand this truth," he said.

Singh said the example of Russia banning Meta, the parent company of Facebook, by calling it a "terrorist organisation" shows how the meaning of war has changed.