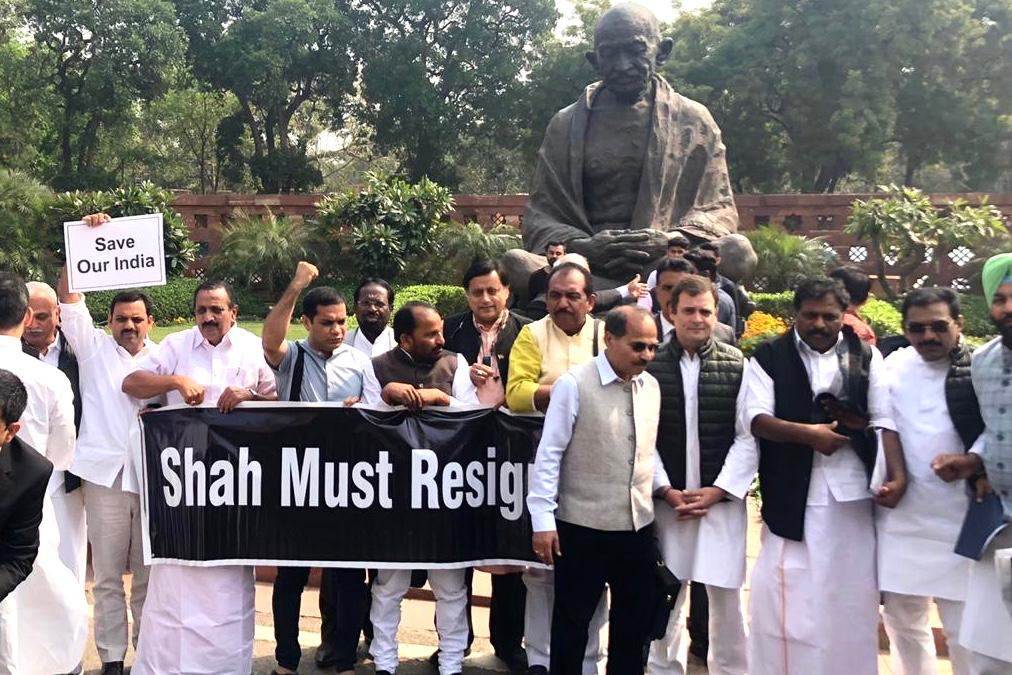 Congress, Trinamul and AAP MPs staged separate dharnas on Monday near the Gandhi statue in Parliament, demanding answers from the government on the Delhi riots on the first day of the second half of the Budget Session.

Covering their eyes with black bands and holding a finger on their lips in an apparent imitation of the Gandhi's Three Monkeys, MPs like Mohua Mitra, Sukhendu Shekhar Rai were part of the protest.

Trinamul Congress MPs staged a dharna on Monday demanding answers from the government on the Delhi riots near the Gandhi statue in Parliament.

Holding placards and shouting slogans, the MPs said that the issue will be raised very strongly in Parliament.

Covering their eyes with black bands and holding a finger on their lips in an apparent imitation of the Gandhi's Three Monkeys, MPs like Mohua Mitra, Sukhendu Shekhar Rai were part of the protest. 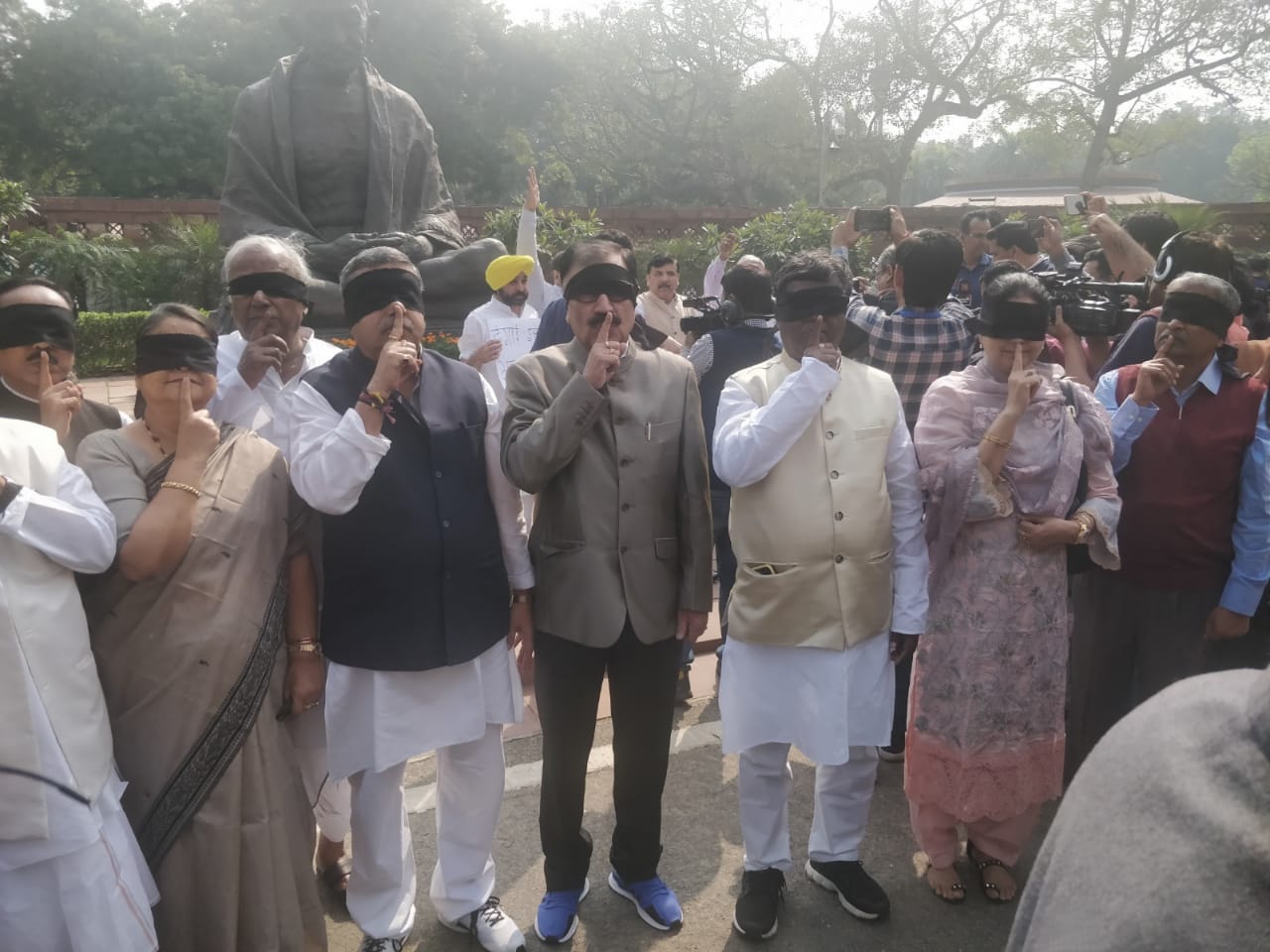 Trinamul Congress MPs stage a dharna near Gandhi statue in Parliament on the first day of the second half of the Budget Session in New Delhi, on Monday, March 2, 2020.
Twitter/@AITC_Parliament

The Congress MPs held placards reading 'Save Our India', 'Prime Minister Must Answer' and 'Shah Must Resign'.

'When Delhi was burning, our home minister was playing the host in Ahmedabad. Playing a host is fine, but when Indians were being killed, that should have been the priority,' Congress' leader in Lok Sabha Chowdhury said referring to the 'Namaste Trump' programme in which Shah had participated.

'There should be an investigation into the violence. The prime minister speaks after three days, the home minister does not say anything, Ajit Doval is sent to look into it, this is their failure,' he told reporters outside Parliament. 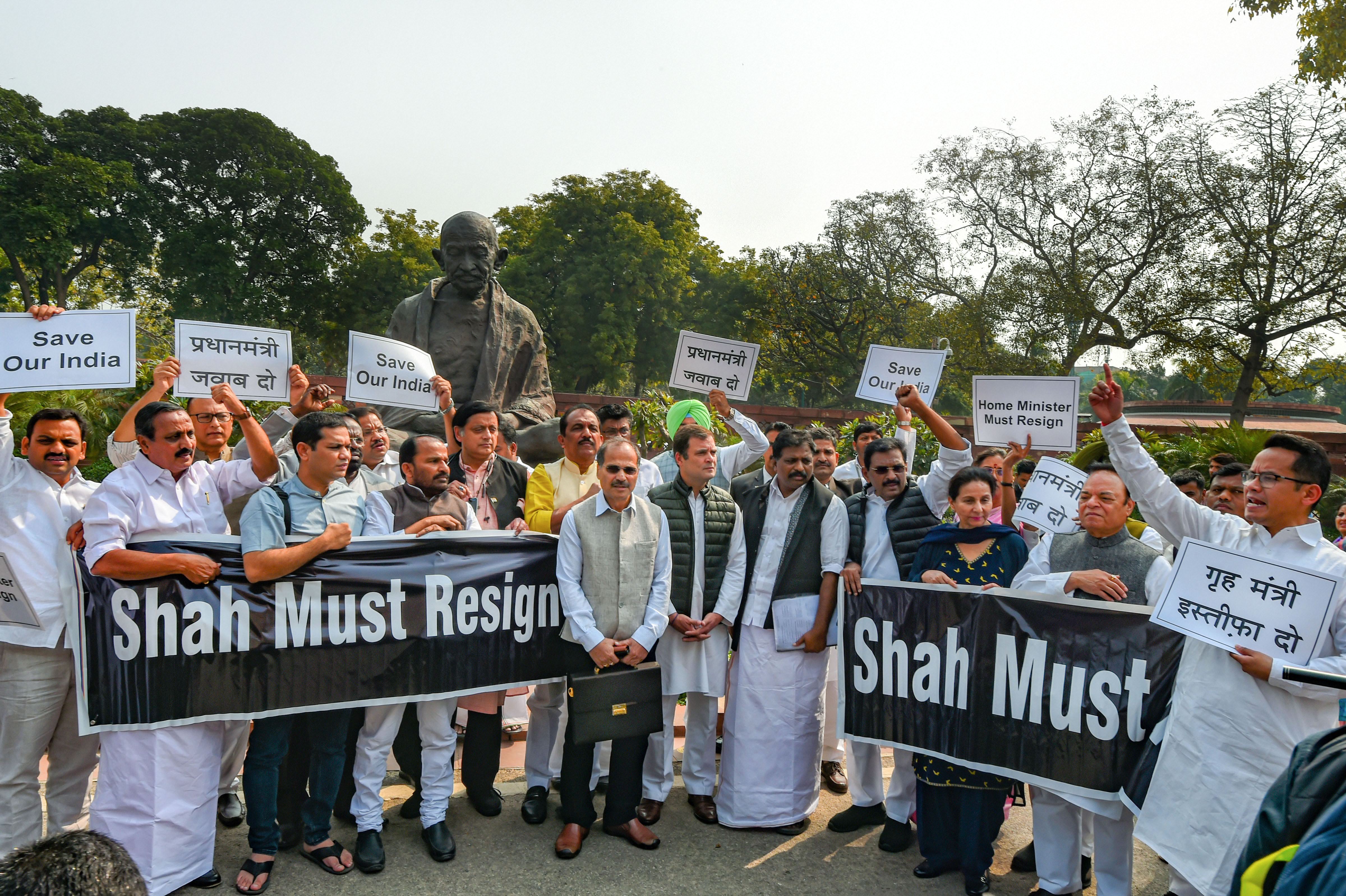 Speaking to reporters, Tharoor said the Congress wants a debate over what happened in Delhi.

The Congress and other Opposition parties have accused the police of bias and inaction in the Delhi violence.

A Congress delegation, including party chief Sonia Gandhi, had urged President Ram Nath Kovind on Thursday to call for the home minister's resignation over his alleged 'abdication of duty' during the communal violence in Delhi and remind the Centre of its 'raj dharma'.

The Congress Working Committee (CWC), the highest decision-making body of the party, had also deliberated on the issue last week and passed a resolution, demanding answers from both the central and Delhi governments, while also urging the people of Delhi to 'reject the politics of hate'.

The Congress president on Friday had deputed a five-member team to visit the riot-affected areas in northeast Delhi and submit a report to her after assessing the situation there. 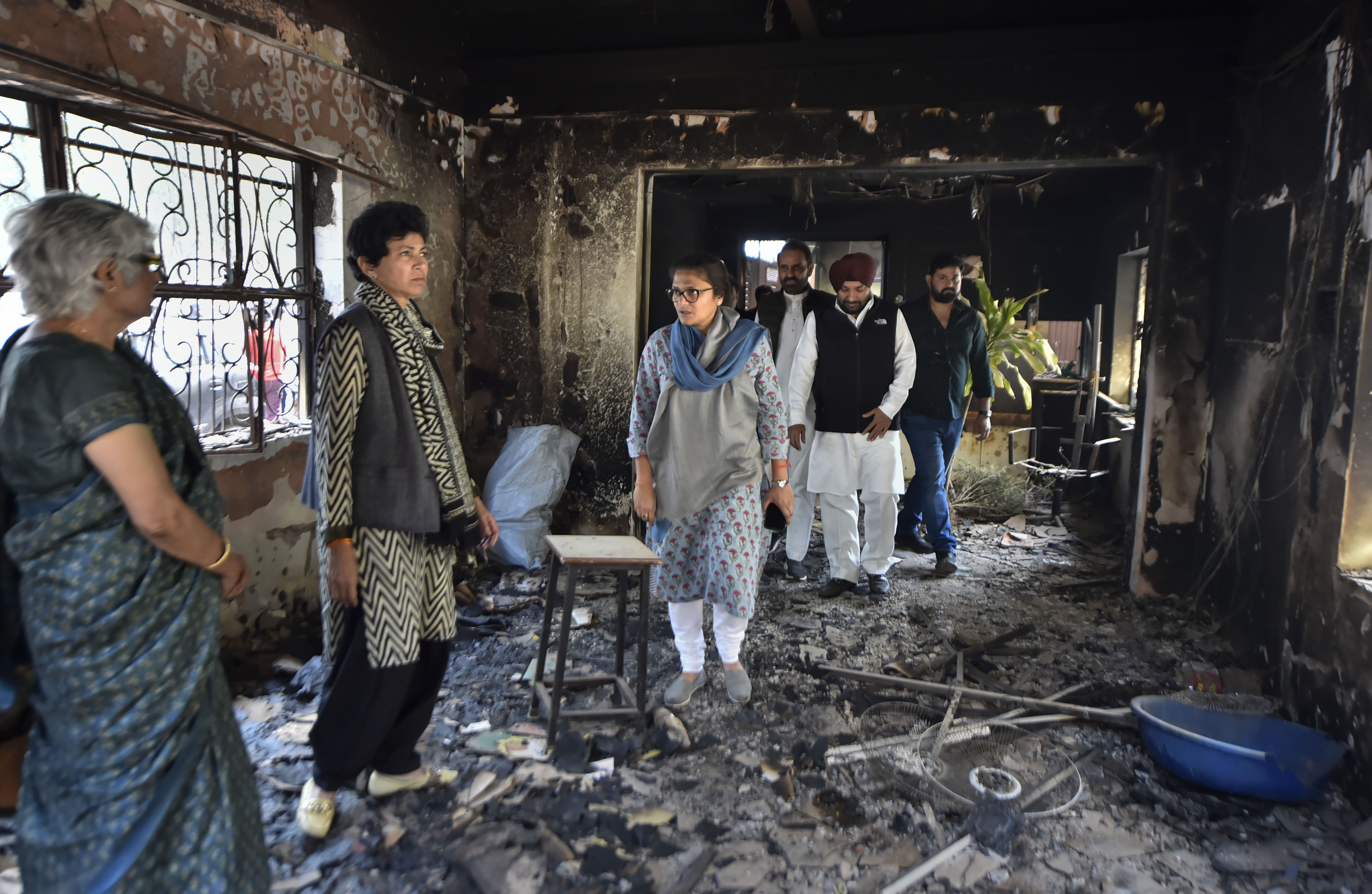 The Aam Aadmi Party (AAP) MPs also staged a protest inside the Parliament complex over the issue of communal riots in Delhi and demanded a probe by a Supreme Court or high court judge into the last week violence.

'We want a probe by a sitting high court or Supreme Court judge. A joint parliamentary committee must be made to look into the violence,' Singh said.

'Why is it not being discussed in Parliament who is responsible for the riots. Delhi was set on fire by BJP leaders like Kapil Mishra, Pravesh Verma and Anurag Thakur who gave inflammatory speeches. There is no law and order in Delhi,' he said.

Singh said the leaders who were involved in spreading hate must be subjected to a narco analysis test and the results should be publicised to the entire country.

The AAP MP has also given a 'Suspension of Business Notice' in the Rajya Sabha over the violence. 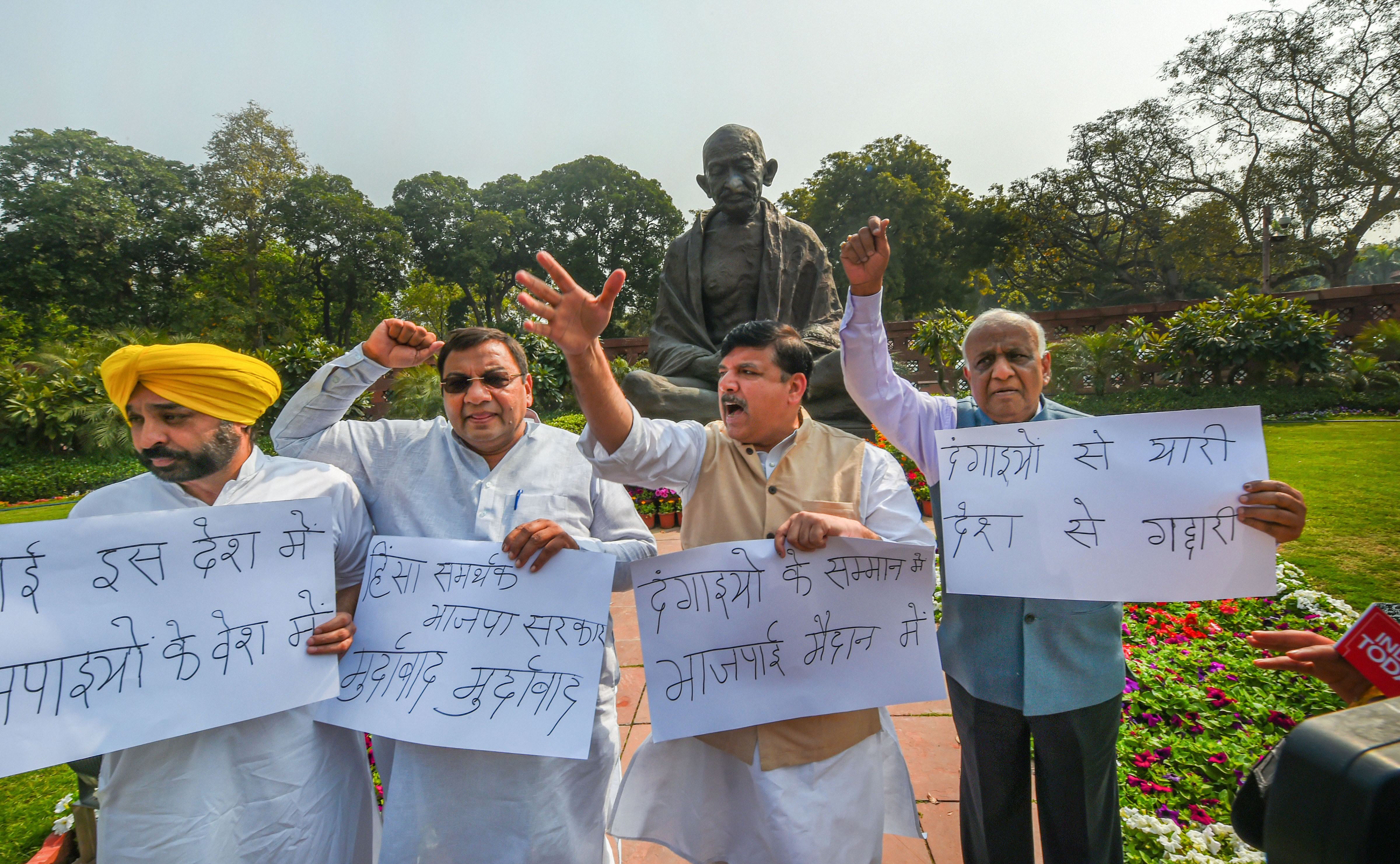 At least 42 people died and more than 200 were injured during the communal riots in northeast Delhi.

Opposition MPs have also given notice in Lok Sabha and Rajya Sabha to discuss the Delhi riots.

The Budget Session of Parliament commenced on January 31 and continued till February 11. After a break, it commenced on March 2 and will continue till April 3.