Indian diplomats took solace in the absence of any reference to J&K in the Abu Dhabi Declaration, describing it as progress since the Dhaka Declaration 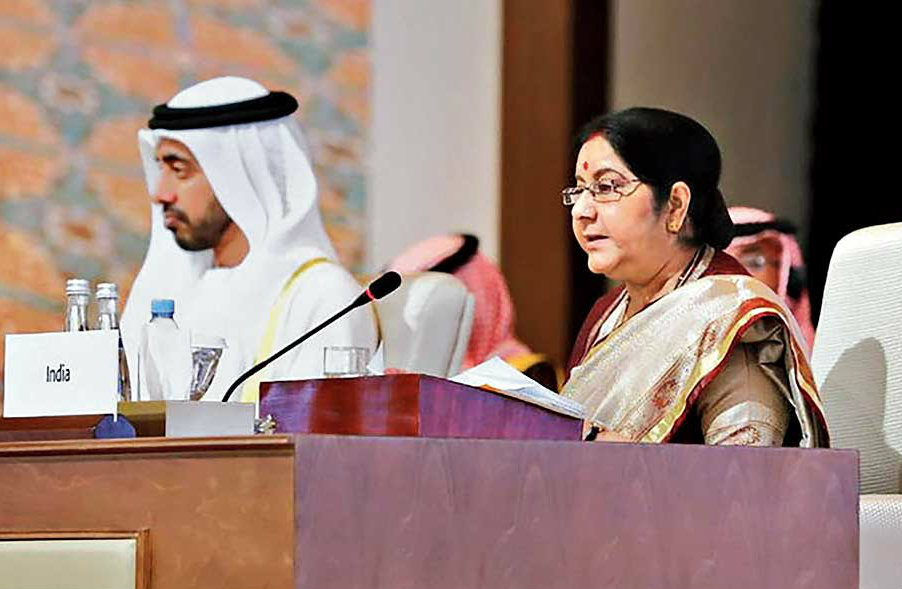 India was not outwardly perturbed on Saturday at the Pakistan-sponsored resolutions on Jammu and Kashmir adopted at the two-day Organisation of Islamic Cooperation meeting in Abu Dhabi despite their references to “Indian terrorism’’ and “Indian barbarities’’.

India had for the first time addressed an OIC meeting on Friday, marking a diplomatic achievement and forcing the Pakistani foreign minister to boycott the 46th session of the 57-country grouping’s Council of Foreign Ministers (CFM).

On Saturday, Indian diplomats took solace in the absence of any reference to Jammu and Kashmir in the Abu Dhabi Declaration, describing this as progress since the Dhaka Declaration of the 45th CFM contained such a mention.

As for the two Kashmir-related resolutions, they stressed that they were a regular feature and that their content was mostly a repeat of previous years’ texts.

Asked about the Kashmir-related resolutions, the Crown Prince of Abu Dhabi, Mohammed bin Zayed Al Nahyan, sought to downplay the matter by underlining that this was no different from the practice of previous years. Instead, he chose to highlight the significance of India’s presence.

“The OIC has sent a very clear and positive sign to India... that the OIC appreciates the relationship with India and looks forward to strengthening the relationship to a point where we can embrace India one day in the OIC,’’ he said.

He acknowledged that this would not be an easy task, alluding obliquely to Pakistan, a founding member of the OIC that was represented by an official delegation this time.

“I know we are not there yet for obvious reasons but what I can say is that having India as a guest of honour was a historic moment for the OIC,” he said.

“It was a historic moment for India definitely and the language that you are referring to has been in our previous statements.”

The Crown Prince had earlier resisted Pakistan’s efforts to get hosts United Arab Emirates to withdraw the invite to India.

Inviting India to the meeting a month after the first papal visit to a Gulf country signals an effort by the UAE in particular, and other Islamic countries in general, to shed their image of rigidity on religion at a time many of them face the blowback of radicalisation.

The UAE is celebrating 2019 as the “Year of Tolerance”, and the Abu Dhabi Declaration articulates the OIC’s advocacy of pluralism and its efforts to combat the extremism within by acknowledging the link between extremist ideologies and terrorism.

Reacting to the Kashmir resolutions, the external affairs ministry spokesperson too chose to focus on the UAE’s gesture of offering “guest of honour’’ status to minister Sushma Swaraj. He added that Jammu and Kashmir was an integral part of India and a matter internal to India.

The Pakistan-sponsored Jammu and Kashmir resolutions condemned the “intensified Indian barbarities’’ since 2016 in the state and the arrest of the Hurriyat leadership, and termed Kashmir the “core issue’’ between India and Pakistan.

The CFM regularly adopts two resolutions related to Kashmir, one on the dispute and another on the peace process between India and Pakistan, and always refers to India as an “occupation’’ force.

The resolutions have gone a step further this time and spoken of “Indian terrorism in occupied J&K’’, but Indian diplomats said they had anticipated this keeping in mind the prevailing circumstances.