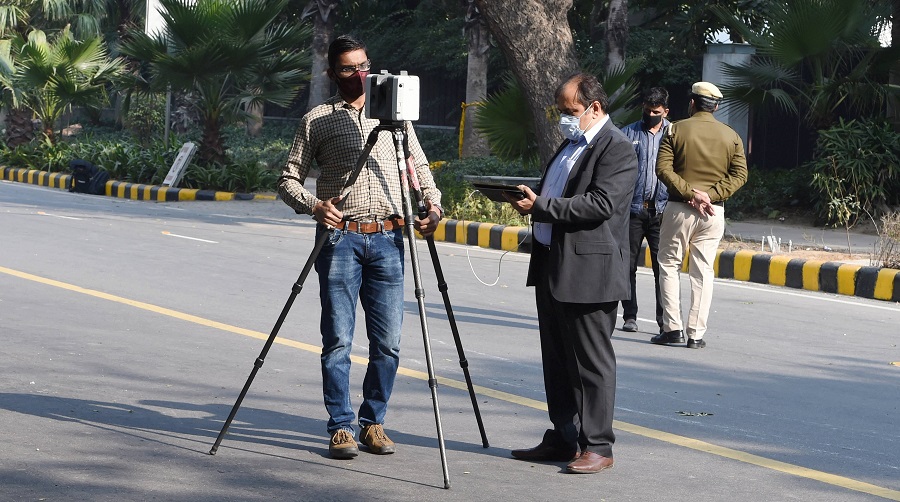 Investigators probing the minor blast near the Israeli Embassy have not come across "anything concrete" yet as most of the CCTV cameras near the site of the explosion were "non-functional" at the time of incident, official police sources said on Saturday.

An investigation team of Delhi Police's Special Cell had earlier in the day visited the site near the embassy to collect more evidence as part of its ongoing probe, sources said, adding that it managed to get access to footage from some of the CCTV cameras in the area.

"We have recovered some CCTV footage but have not obtained anything concrete yet as most of the CCTV cameras in the area near the embassy are non-functional," an official source said.

Earlier, footage retrieved from CCTV cameras showed a vehicle moving suspiciously near the embassy just before the explosion, sources said.

Another source said that forensic experts have also collected some samples from the crime scene that will ascertain the chemical composition used in the low-intensity improvised explosive device (IED).

Official sources said ball bearings seized from the spot were found scattered on the ground and the impact of the explosion was felt within a radius of 20-25 metres.

The minor blast took place on Friday evening in a high-security zone of the national capital. No one was injured.

An envelope addressed to the Israeli Embassy and containing a note was found at the site of the blast, sources had said. A case has been registered and the Delhi Police's Special Cell is investigating the matter.

Initial investigations revealed that the IED was planted in a flower pot on the median near Jindal House on A P J Abdul Kalam road outside the Israeli embassy, sources said on Friday.

A 10-member team from the Forensic Science Laboratory (FSL) had on Friday visited the blast site and collected residues which include metallic swab and ball bearings.

Delhi Police Commissioner S N Shrivastava too had visited the site in the evening and took stock of the situation.

All materials seized from the spot have been handed over to the investigating officer of the Delhi Police, a source said.

"We are yet to receive the samples collected from the spot. Once the investigating officer submits the samples conclusively, we will be sending them to our explosives team. Only a chemical test will help us identify the exact composition of the samples," FSL sources said.

The blast took place when President Ram Nath Kovind, Vice President M Venkaiah Naidu and Prime Minister Narendra Modi were present a few kilometres away at the Beating Retreat ceremony at the culmination of the Republic Day celebrations.

The explosion took place on a day when India and Israel marked the completion of the 29th anniversary of establishment of their diplomatic relations.