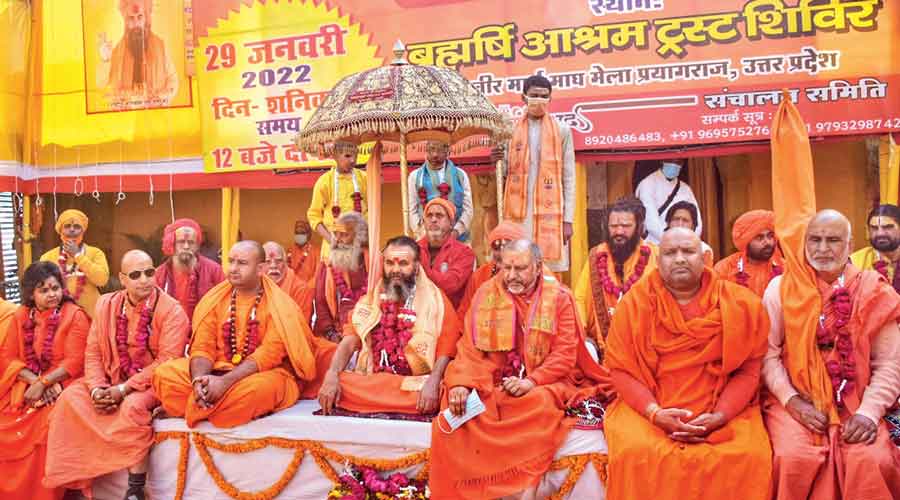 A gathering of sadhus in Allahabad on Saturday passed resolutions demanding the government declare India a Hindu Rashtra and introduce the death penalty for organisers of religious conversions.

One of the conveners of the “Sant Sammelan” — which a senior monk conceded was a Dharma Sansad by another name — threatened a possible bombing of an “Assembly” if the two people arrested in connection with the Haridwar Dharma Sansad were not freed within a week.

The 400 gathered sadhus  pledged they would from now on append “Hindu Rashtra” to “India” in their writings and communications.

They demanded that the Narendra Modi government at the Centre and the Yogi Adityanath government in Uttar Pradesh ban the use of the words “minority” and “majority”.

The three resolutions passed at the event — timed to coincide with the annual, month-long Magh Mela that began on January 14 — were:

⚫ Declare all religious conversions a “rarest of the rare” crime, with capital punishment introduced for the organisers.

Narasinghanand, mahant of the Dasna Devi temple in Ghaziabad, Uttar Pradesh, had convened the December 17-19 Dharma Sansad in Haridwar, Uttarakhand, where he and several other speakers allegedly called for a genocide against Muslims to create a Hindu Rashtra.

Rizvi has been arrested for purportedly delivering a hate speech against Muslims at the Dharma Sansad, while Narasinghanand has been arrested on the less punitive charge of insulting Muslim women at the same event.

“We shall organise a massive protest across the country if Narasinghanand and Tyagi are not released within a week,” Narendra Anand Giri, one of the conveners of the Sant Sammelan, said.

He then drew a bizarre parallel between the gathered sadhus and the revolutionary freedom fighter Bhagat Singh, who had bombed the Central Legislative Assembly in Delhi in 1929 in protest against a British law.

“If the government delays their release, there may be an incident like the bombing of the Assembly, for we are ready to become Bhagat Singh,” Giri said.

Reminded that as an atheist and socialist, Bhagat Singh was on the opposite end of the political spectrum from the Hindu Rashtra advocates, Giri said: “I don’t know anything other than that India was partitioned on the basis of religion and that we are already a Hindu Rashtra.”

The Haridwar event had triggered protests in India and abroad, with petitioners seeking intervention by the Supreme Court, which allowed them to apply to local authorities to prevent similar Dharma Sansads in other places.

Anand Swaroop, a Haridwar-based sadhu who had earlier announced a Dharma Sansad in Allahabad on January 22 and 23, said the name had been changed to “Sant Sammelan” because of the controversy.

He added that the event had been postponed at the request of some sadhus who planned to visit Allahabad for the Magh Mela a little later.

Swaroop is among half-a-dozen people named in the Haridwar FIR and has been questioned.

About 20,000 sadhus are camping along the Ganga in Allahabad for the Magh Mela. Only about one in five attended the Sant Sammelan, with all the senior sadhus from the various akharas and mutts keeping their distance.