Debate on breach of rights of legislature parties 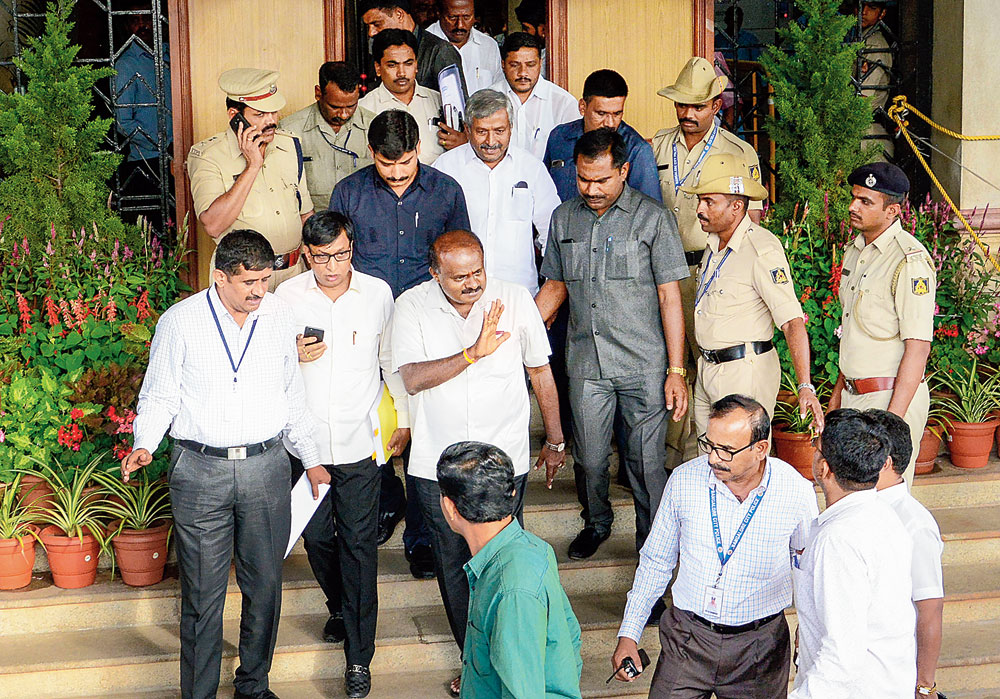 The Supreme Court order that the rebel MLAs cannot be compelled to attend the Assembly session “indirectly infringes” on the rights of the Congress and the Janata Dal (Secular) legislature parties, neither of which was made a respondent to the petitions, a senior Congress leader said on Wednesday.

Gowda and his party colleagues met the Speaker, Ramesh Kumar, on Wednesday. Gowda said Kumar could not offer a clarification on the issue at this stage.

“However, if and when the powers given to legislature parties under the Tenth Schedule are found to be violated, then we are free to approach the Speaker at that time,” the Congress leader said.

The Speaker has also asked the ruling alliance to seek legal opinion on the situation arising from the apex court order over whether lawmakers can escape whips.

“At the moment discussions within our legislature parties are in favour of issuing a whip. A final decision will be made,” Gowda said.

A whip is already in force requiring all ruling alliance MLAs to be present in the House for the monsoon session. A separate one could be issued directing the MLAs to vote for the government.

The Speaker conveyed to the Congress leaders that the Assembly has its own rule that deals with absentees — in this case rebel lawmakers who are unlikely to attend the trust vote to be moved on Thursday.

While Gowda did not refer to any specific norm, Rule 203 of Rules and Procedures of Karnataka Legislative Assembly deals with leave of absence for any period from the House.

“A member desiring permission of the House to remain absent from sitting thereof under clause (4) of Article 190 of the Constitution shall make an application in writing to the Speaker, specifying the period for which he may be permitted to be absent from the meetings of the House indicating also the grounds for it,” states Clause 1 Rule 203.

But a senior Congress leader, who is also a lawyer, said the House rules are basically meant for conducting business. “In my opinion, it will be difficult for the Speaker to scare the rebels with House rules. Only a whip can do

that job,” said the leader, who declined to be named. He added that a whip was key to disqualifying absentee lawmakers.

The state Congress president criticised the apex court order. “Supreme Court order…. has set a wrong precedent as the value of the Whip as per 10th schedule of the Constitution is now redundant. An extraordinary order indeed!!” Dinesh Gundu Rao tweeted.

In another tweet, Rao said the court order was “encroaching” upon the rights of the state legislature.

“The #SupremeCourt verdict is now encroaching upon the rights of the Legislature. This is a bad judgement which seems to protect the defectors and encourages horse trading and also violating the doctrine of separation of powers,” Rao tweeted.