The victim’s local police station is in Mahkar, the village of former chief minister Jitan Ram Manjhi, whose Hindustani Awam Morcha Secular too is part of the ruling NDA 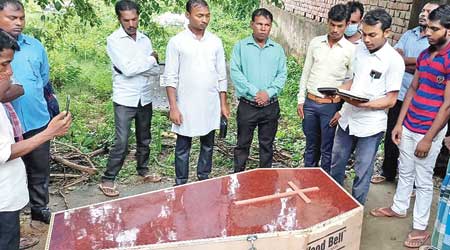 A 14-year-old Dalit Christian boy who had faced an acid attack in Gaya died at a Patna hospital on Sunday, with neither Gaya nor Patna police filing cases despite the family alleging longstanding threats by saffron-clad bullies and local people.

Class VIII student Nitish Kumar, who had been fighting for life since being drenched with acid on a street on August 11, shares his name with the Bihar chief minister who runs a coalition government with the BJP.

The victim’s local police station is in Mahkar, the village of former chief minister Jitan Ram Manjhi, whose Hindustani Awam Morcha Secular too is part of the ruling NDA.

A police officer suggested the death was a suicide; and a doctor said the family did not want to pursue the matter legally, possibly because matters needed to be speeded up to prevent the body of the burn victim decomposing.

The statements of neither the police officer nor the doctor prove anything — only a post-mortem and an attendant investigation can establish the cause of the death; and if it was an unnatural death or a murder, an autopsy was mandatory.

The Telegraph had contacted the family when the boy was fighting for his life in hospital. The family declined to speak. In fact, the relatives were so terrified of repercussions that they refused to even discuss their religion. They spoke to the newspaper only after Nitish died.

The boy’s father Vakil Ravidas, a rickshaw-puller in Kamta Nagar village, had adopted Christianity with his family around five years ago. Family members said some local people, including a few who appeared Hindutva activists, had been threatening and warning them against attending church but the police refused to register a case before or after the acid attack.

When this newspaper contacted the station house officer (SHO) of Mahkar, he refused to reveal his name and said the boy had immolated himself.

“We conducted inquiries. It was the result of a family dispute. The victim was sporting long hair and his elder brothers forcibly cut it. Peeved, he set himself on fire and suffered burns,” the SHO said.

Asked about the police version, Nitish’s eldest brother Rajeev Kumar told this newspaper: “This is not true. Some people threw acid at him. We wanted to register an FIR and had gone to the police station, but the police were not helpful.”

Dr Kamod Narayan Tiwary, owner of the hospital where Nitish was treated, said the local police (from Agamkuan police station in Patna) were informed after Nitish died.

“The police came and said they did not want to get involved in the case. It was getting late and the bodies of burn victims decompose fast,” Tiwary said. “Finally, the guardians of the boy were asked (by the hospital) to give a declaration that they did not want to register a case. The body was released after that.”

Tiwary added: “The family signed on a consent sheet declaring they were not interested in pursuing the matter further with the police or the courts, did not want a post-mortem and wanted to take the body with them. They took the body away after that.”

Shailesh Kumar Jha, a criminal lawyer, said: “It’s the responsibility of the hospital to ensure that a post-mortem is conducted in purported cases of crime, accident or unnatural death. In the case of the boy, too, the hospital should have ensured this even if the family did not want to pursue the case and was willing to give it in writing.”

Jha added: “However, Nitish’s family are free to approach the police or court irrespective of their submission to any hospital.”

Sanjeet, elder brother of Nitish and a Class X student, said: “My brother (Nitish) had gone to buy vegetables from the local market around 6.30am on August 11. He had hardly gone 750 metres when three men on a motorcycle threw acid on him. He started burning and rushed back screaming.”

A local doctor provided first aid. Nitish was admitted to the Apollo Burns Hospital in Patna, about 100km from Gaya, on August 12.

“When I saw the boy, 70 per cent of his body had burns. Both hands, his back, parts of the chest, both thighs and a leg had severe burns that seemed to have been caused by acid or a similar chemical,” Tiwary said.

“Around 18 per cent of his burns were third-degree burns, reaching deep into his muscles. He was critical. He used to tell me how some people had thrown acid on him.”

Agamkuan SHO Abhijeet (who goes by one name) said: “We did not get any information from the hospital; otherwise we would have definitely gone there.”

He added: “In any case the hospital did not give us anything in writing.”

Asked about this, Tiwary reaffirmed that the police did come to the hospital. “I wasn’t there on Sunday morning. It seems the statement of the family wasn’t recorded,” Tiwary said.

Nitish was buried on Sunday afternoon. His mother has taken ill and is repeatedly falling unconscious.

Nitish’s eldest brother Rajeev, who’s looking for a job, said the threats to the family had increased recently.

“Some local people used to ask us not to attend church or hold prayers at home. In July, threats were being issued all around that all Christians would be chased away from the area,” he said.

In December last year, a group of people had blocked the roads leading to the church in Kurwa, which the family and other local Christians attended, he added.

Rajeev said the local police had refused to register an FIR after the acid attack. “Later, Gaya city superintendent of police Rakesh Kumar talked to us, but nothing happened after that,” he said.

Phone calls by this newspaper to the Gaya city SP and to senior superintendent of police Aditya Kumar were not answered.

A local Christian said, asking not to be named, that the people who had threatened Nitish’s family “would not take the name of any organisation but often sported saffron gamchhas, turbans and kurtas”.

“They were threatening Christians at many places in Gaya and neighbouring districts. We are afraid to go to the police because our homes, land and businesses are here. I just wish somebody would do something to stop this torture.”

Tiwary said Nitish needed skin grafting but had just around 22 per cent normal skin left. And this too was mostly over the belly and therefore unusable, for the boy had to sleep on his stomach.

“But his will to live was strong and he kept battling the hopeless condition. It’s a pity we couldn’t save him.”

Dalit kids asked to do dishes