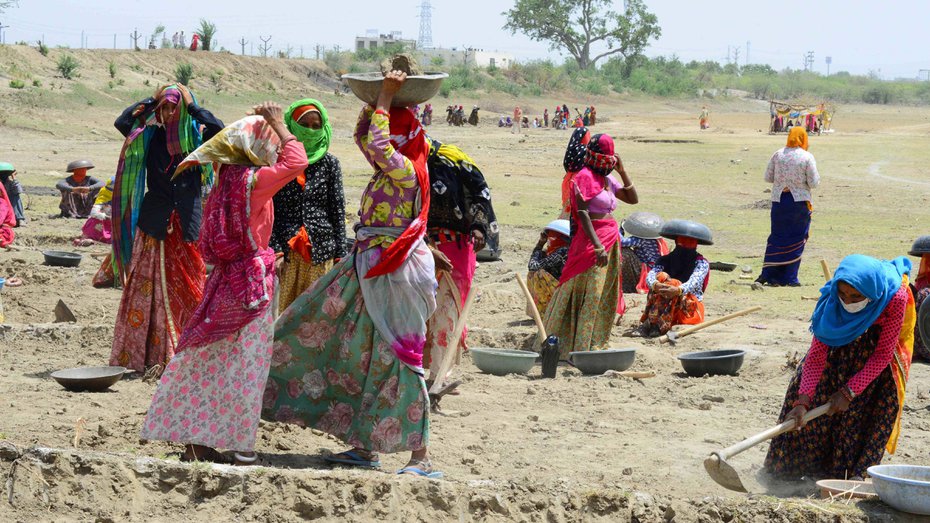 The CPM on Wednesday demanded extension of the Mahatma Gandhi National Rural Employment Guarantee Act (MGNREGA) to the urban poor to help them deal with the rampant job losses caused by the ill-planned lockdown that has delivered a body blow to an economy already in recession.

The party raised the demand at its first politburo meeting held through video-conferencing. It was decided that the CPM would call for an all-India protest on June 16 in keeping with pandemic restrictions to mount pressure on the government to extend the MGNREGA to urban areas and increase the work days to 200 from 100 in rural areas.

Other demands include cash transfer of Rs 7,500 per month for six months to all families outside the income tax bracket, 10kg foodgrains free to every individual for six months and stopping the privatisation of the public sector and dilution of labour laws.

The call for expanding employment guarantee to urban areas and increasing work days to 200 in rural areas under the MGNREGA found support from a “heterodox economists’ collective” that came out with a report on Wednesday decoding the series of packages announced by the government to pull up the economy from the doldrums it is in due to the demonetisation, haphazard rollout of the GST and the unplanned lockdown.

In its report, the collective has described the MSME package announced by the Narendra Modi government on Monday as an eyewash similar to the “atmanirbhar (self-reliant) package” and the minimum support price (MSP) hike.

The new definition of MSME, they said, expands its universe to much larger enterprises without taking Parliament’s approval.

“Since the government mandatorily procures 25 per cent of its requirements from the MSME sector, the expansion of the sector by including larger enterprises within its ambit would benefit them at the cost of the smaller enterprises,” the report said.

Detailing this, the collective said the Rs 3 lakh crore collateral-free, concessional MSME loans announced in the “atmanirbhar package” were available only for 7 per cent of MSMEs that already have an outstanding loan on February 29, 2020.

The Rs 50,000-crore equity infusion for stock exchange listing will cater only to the largest of the now-enlarged medium enterprises, making them the biggest beneficiaries of the Rs 20,000 crore subordinated debt announced for two lakh stressed MSMEs.

“Overall, the government’s package alongside the definition change will actually help a handful of large enterprises while the micro enterprises which comprise the overwhelming majority of MSMEs continue to remain neglected,” the collective said in the report released on Wednesday by development economist Jayati Ghosh.

As for the MSP hike of Rs 53 per quintal for common paddy, they pointed out that it is just a 2.9 per cent increase over the last fiscal, making it the lowest percentage hike in a decade.

They have also demanded food for all by providing free cereals, pulses and cooking oil for six months by universalising the public distribution system, and Rs, 15,000 cash payments to the bottom 80 per cent of households as compensation for incomes lost during the lockdown.

The economists associated with the report are Abhijit Mukherjee at the Observer Research Foundation, Anjana Thampi and Ishan Anand at O.P. Jindal Global University, Dipa Sinha at Ambedkar University, Indranil Chowdhury of PGDAV College in Delhi University, Rohit Azad from JNU, Calcutta-based Prasenjit Bose; Sangeeta Ghosh of the Institute for Studies in Industrial Development, Sourindra Ghosh from the Council for Social Development, Subhanil Chowdhury of the Institute of Development Studies and and Zico Dasgupta at Asim Premji University.