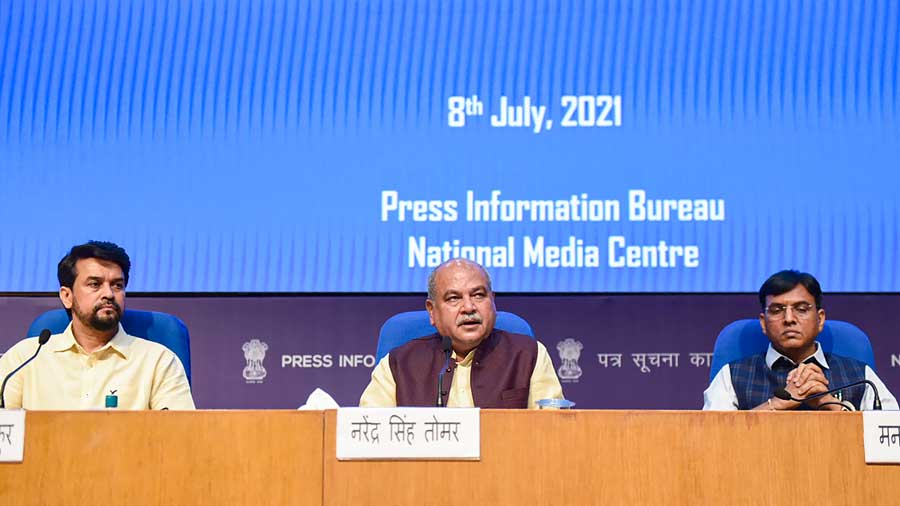 The Union cabinet Thursday approved a Rs 23,123-crore package for improving health infrastructure to fight Covid-19 as part of which around 2.4 lakh medical beds and 20,000 ICU ones would be created with a special focus on paediatric care.

Addressing a press conference here after the first meeting of the Union cabinet following its reshuffle on Wednesday, Health Minister Mansukh Mandaviya said the package will be implemented over the next nine months till March 2022.

The meeting was chaired by Prime Minister Narendra Modi.

Mandaviya said this is the second phase of the Emergency Response and Health System Preparedness Package as the Central government had given Rs 15,000 crore earlier for setting up Covid-dedicated hospitals and health centres across the country.

Under the new package, the Centre would provide Rs 15,000 crore and states Rs 8,123 crore, and the plan would be implemented jointly by them across all the 736 districts to improve medical infrastructure at primary and district health centres.

Around 2.4 lakh normal medical beds and 20,000 ICU beds would be created of which 20 percent would be specially earmarked for children, he said.

The minister said storage facilities for oxygen and medicines would also be created at district level under the plan.

An official statement said states and UTs would be supported to create paediatric units in all 736 districts and to establish Paediatric Centre of Excellence in each state and UT (either in medical colleges, state government hospitals or central hospitals such as AIIMS, INIs, etc) for providing tele-ICU services, mentoring and technical hand-holding to the district paediatric units.

They would be supported to augment 20,000 ICU beds in public healthcare system out of which 20 per cent will be pediatric ICU beds, it said.

The Phase-II of the package has central sector (CS) and centrally-sponsored schemes (CSS) components.

The statement said that under the central sector components, support would be provided to central hospitals, All India Institutes of Medical Sciences, and other Institutions of National Importance under DoHFW for repurposing 6,688 beds for Covid-19 management.

Support would be provided for the implementation of Hospital Management Information System (HMIS) in all the district hospitals of the country (presently, it is implemented only in 310 DHs), the statement said.

All district hospitals would implement HMIS through NIC-developed e-Hospital and CDAC developed E-Shushrutsoftwares. This will be the biggest impetus for implementation of the National Digital Health Mission (NDHM) at the DHs, the statement said.

Support would also be provided for expanding the national architecture of eSanjeevani tele-consultation platform to provide upto 5 lakhs tele-consultations per day from the present 50,000, the statement said.

Under the CSS components, efforts are aimed at strengthening district and sub-district capacity for an effective and rapid response to the pandemic.

States and UTs would be helped to provide care closer to the community due to the ingress of COVID-19 in rural, peri-urban and tribal areas, by creating pre-fabricated structures for adding additional beds at the existing CHCs, PHCs and SHCs (6-20 bedded units) and support would also be provided to establish bigger field hospitals (50-100 bedded units) depending on the needs at tier-II or tier-III cities and district HQs, the statement said.

They would be given help to install 1,050 liquid medical oxygen storage tanks with medical gas pipeline system (MGPS) with an aim to support at least one such unit per district and augment the existing feet of ambulances, the statement said.

As many as 8,800 ambulances will be added under the package, it said.

In March 2020, when the country was faced with the first wave of the Covid-19 pandemic, the PM announced a Central Sector Scheme of Rs. 15,000 crore as the 'India Covid-19 Emergency Response and Health Systems Preparedness Package', the statement said.

Since mid-February 2021, the country is experiencing a second wave with spread into rural, peri-urban and tribal areas, the statement added.