While the Centre claims its programme to provide subsidised rations to workplaces has been implemented in most states, Delhi has not joined the scheme 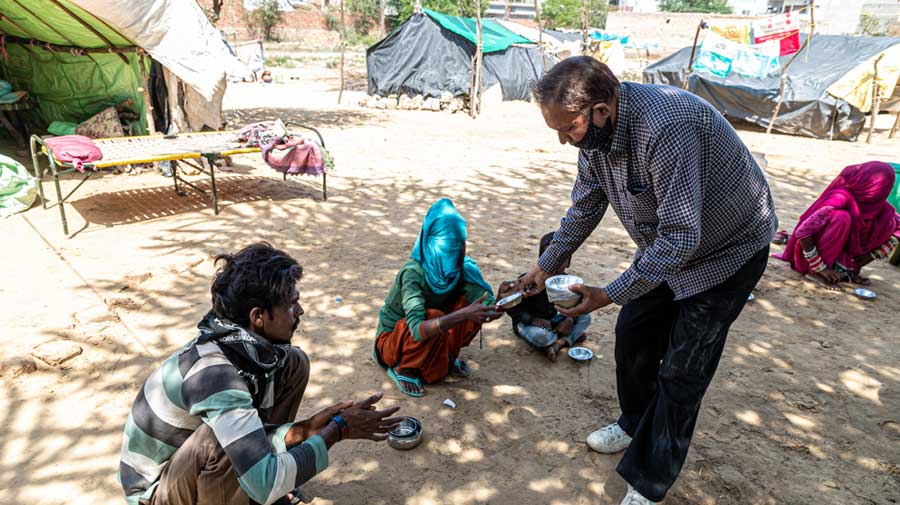 The Delhi government has opened a few public kitchens that serve free meals but Raut says the nearest one is at least 2km from his home and the queues are too long.
Basant Kumar Mohanty   |   New Delhi   |   Published 06.05.21, 01:24 AM

Migrant worker Sushil Raut has had no work since the Delhi government imposed a lockdown on April 17.

The plumber from Kendrapada, Odisha, who lives in a rented room in a south Delhi slum with his family has not received any assistance from anywhere, either.

Raut took a loan of Rs 30,000 from Muthoot Finance against his wife’s gold ornaments on Monday to feed his family of four, which includes two young children.

“There’s no point going back home. Travelling involves (Covid) risk. The Odisha government has imposed a lockdown too, so there won’t be any work there, either. I took the loan because I have no income,” Raut told The Telegraph.

The Delhi government has opened a few public kitchens that serve free meals but Raut says the nearest one is at least 2km from his home and the queues are too long.

While the Centre claims its programme to provide subsidised rations to migrants at their workplaces has been implemented in most states, Delhi has not joined the scheme.

Four in five migrant workers across India have had no work for the past two weeks, a civil society group has found after compiling data through phone conversations.

The Stranded Workers Action Network (Swan), set up last year to help migrant workers and study their condition, was contacted by 51 migrants from various cities in Maharashtra, Karnataka, Delhi, Gujarat and Uttar Pradesh.

The organisation contacted another 92 workers, three-fourths of whom were staying back at their workplaces while the rest, traumatised by the events of last year, had returned home.

Some 81 per cent of the workers said they had no work because of locally declared lockdowns, Swan said. Just 18 per cent said they had received some money from their employer after work stopped.

Swan said only 68 per cent of the workers reported having received their full or partial wages for the stretch of April before the lockdowns, with 32 per not having been paid in April at all.

Swan researcher Anindita Adhikari said the data collection did not qualify as a survey since the techniques of sample selection were not used. The organisation had spoken to whoever approached it, and those whose contact details it had from last year.

According to Swan, migrant workers who have stayed back in the cities are short of money even to buy food or pay rent. Few of them have experienced any serious Covid symptoms, though.

Raut said the Delhi government should provide dry rations to all the migrants by reaching out to them across the state.

“It’s not difficult to identify the migrant workers. Government officials can ask the landlords to provide data about their tenants,” he said.

Adhikari said the government must ensure free rations to migrant workers and direct every employer to pay full wages through the lockdown to its workers.

She said the government should also ensure that landlords don’t evict tenants who cannot pay rent, and prioritises the vaccination of the migrant workers.