Lens on US consultant’s role in virus response

The role of an American company has emerged at a time Modi has made “Atmanirbhar Bharat (Self-reliant India)” the cornerstone of his now-ridiculed Rs 20 lakh crore package to revive the post-Covid economy.
(Shutterstock)
G.S. Mudur   |   New Delhi   |   Published 28.05.20, 11:59 PM

Sections of health experts have expressed surprise at the presence of one of the world’s biggest private consulting firms in the Union health ministry’s response to the coronavirus pandemic.

On Thursday, a BCG spokesperson told The Telegraph that client confidentiality prevented the company from providing specific details of the work done with the health ministry.

A senior public health expert said it was not unusual for consulting companies to offer analytical services to governments. Another analyst said countries could benefit from such expertise if they did not have internal capacity but underscored the need for transparency.

No aspersions have been cast on BCG. But the US firm’s presence leaves the Narendra Modi government in an awkward situation because of the positions the Prime Minister has taken now and the Sangh parivar had adopted in the past.

The role of an American company has emerged at a time Modi has made “Atmanirbhar Bharat (Self-reliant India)” the cornerstone of his now-ridiculed Rs 20 lakh crore package to revive the post-Covid economy.

In 2004 — the first year of the UPA — the BJP and the RSS had echoed the Left when it locked horns with the Manmohan Singh government over consultative groups that included representatives of BCG.

Montek Singh Ahluwalia, close confidant of then Prime Minister Singh and the deputy chairman of the now-defunct Planning Commission, was forced to wound up consultative groups, which included BCG, that were constituted for the mid-term appraisal of the Tenth Five Year Plan. The Left was then supporting the UPA from outside.

Now, 16 years later, two senior clinician-researchers, both associated with the government’s response to the pandemic, are saying they shared concerns articulated by a former health secretary and a community medicine expert on BCG’s role.

“Stunning that min(istry) of h(ea)lth GOI should engage a con(sul)t(in)g firm like BCG to do their data analysis and epi modelling. That is the biggest shame of all,” Rao also said in a post on Twitter. 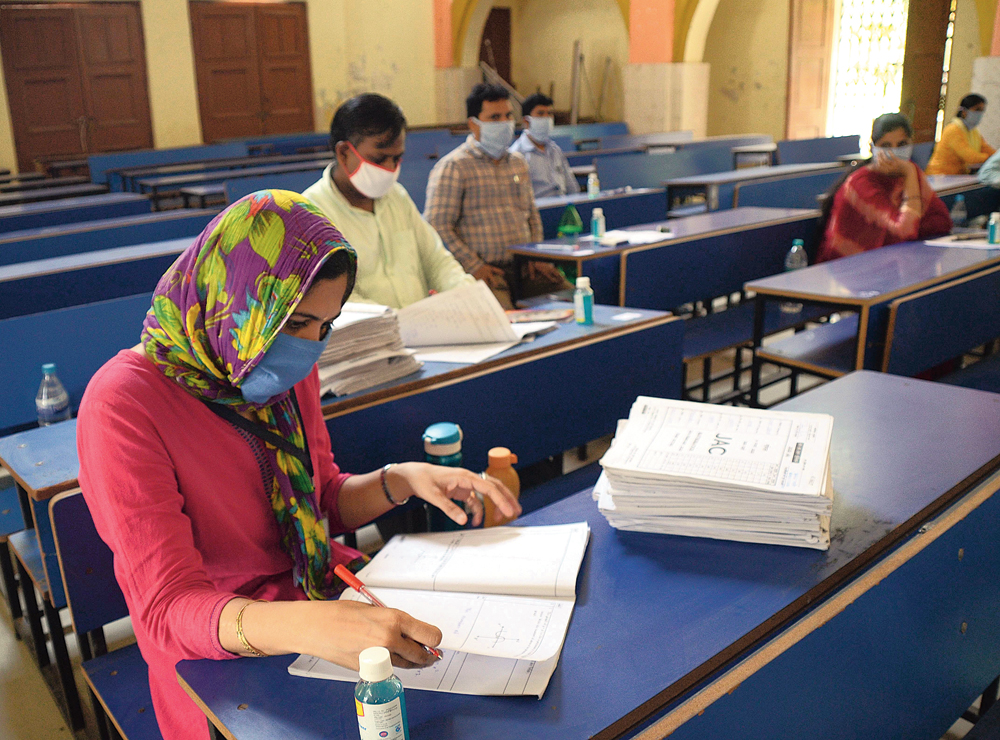 Government schoolteachers practise social distance as they check matriculation answer sheets at the Zilla School in Ranchi on Thursday. Apart from sitting away from each other, teachers who on Thursday started to evaluate the answer sheets of Class X board examinees under the Jharkhand Academic Council also wore masks and kept sanitisers near them as they worked. Both matriculation and intermediate exams were held in February, but the onset of the Covid19 pandemic in the state in March put evaluation on hold and delayed results.
Picture by Manob Chowdhary

Information about BCG’s role in assisting the government on the pandemic had emerged last week when the Centre cited estimates by the consulting group and four other groups of the numbers of infections averted and lives saved by the lockdown.

Vinod Paul, a member of the Niti Aayog, the government’s top think tank, and head of a national task force on the coronavirus disease (Covid-19), had presented five estimates of the numbers of infections averted and lives saved. BCG estimated that the lockdown had saved 120,000 to 210,000 lives, compared with 37,000 to 78,000 by the other groups.

Senior health experts who are advising the government on Covid-19 said the company had been working with the health ministry. “They seem to be involved in data analysis — beyond that I don’t know,” a senior member of a government task force on Covid-19 told this newspaper.

The health ministry did not respond to a query sent by this newspaper seeking information about the role of BCG in the government’s response to the pandemic.

A BCG spokesperson told this newspaper in an email: “We consider our responsibility towards society and nation-building as a core element of our purpose. BCG is privileged to contribute to the fight against Covid-19 by levering its core analytical capabilities.”

The company said the approach it had used for the estimates was based on a well-established tool worldwide and considered the standard methodology for creating scenarios around infectious disease spread. “As a matter of policy, BCG does not comment further on the specifics.”

Rao told this newspaper on Thursday that she would consider it “disturbing” if a private consulting firm was guiding the government’s response to a pandemic. “We’ve managed epidemics and pandemics earlier — we’ve sought help from organisations such as the US Centres for Disease Control or the World Health Organisation, or the London School of Hygiene and Tropical Medicine — why a private firm?”

“We have our own expertise in epidemiology, public health and biostatistics,” Rao said, citing the example of the National Centre for Disease Control, New Delhi, and the National Institute of Epidemiology, Chennai.

But the senior public health expert who did not find the consulting companies’ role unusual said: “Some time back, another consulting firm had similarly offered the Maharashtra government assistance in its response to the epidemic there.”

An independent public health analyst said government departments could make use of outside expertise if they did not have internal capacity.

“Transparency of such engagement is key to ensuring that whatever recommendations result from such engagements are trustworthy,” said Dinesh Thakur, a public health activist currently tracking health policy in the US and India.