A news channel claimed there were around 75,000 deaths due to unexplained causes during the second wave of the pandemic 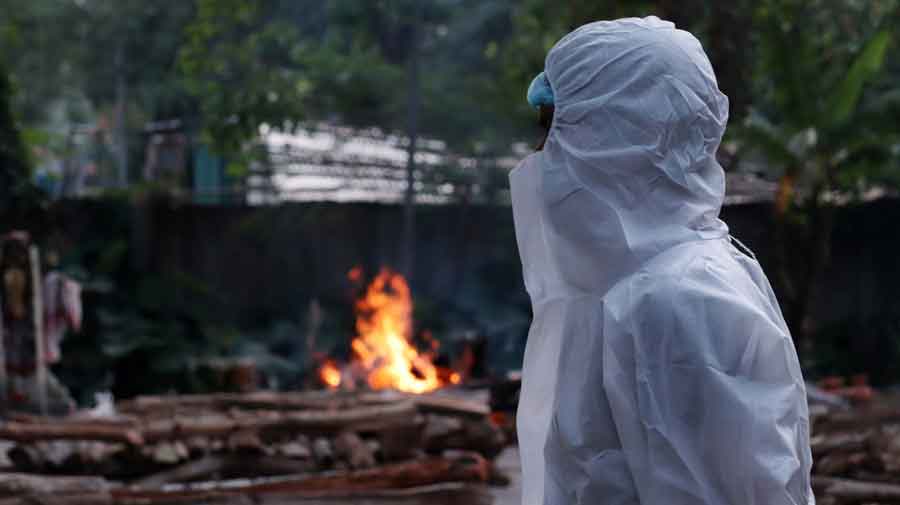 “The district-level committees will have to review the received applications and documents provided with them to be sure that the death is due to Covid-19.
File picture
Dev Raj   |   Patna   |   Published 22.06.21, 01:27 AM

The Bihar government has decided to “re-verify” Covid-19 deaths following a rap by Patna High Court for not making figures public and amid indications that the casualties could be huge after a news channel claimed there were around 75,000 deaths due to unexplained causes during the second wave of the pandemic.

Asserting the need to immediately inform the State Health Society about pandemic-related deaths and showing desired sensitivity in the matter, the government has issued directions that “further information or applications about Covid-19 deaths prior to June 7 may come at the district level”, but has asked for stringent verification.

“The district-level committees will have to review the received applications and documents provided with them to be sure that the death is due to Covid-19.

The letter, a copy of which is available with The Telegraph, says that the report on the probable Covid-19 deaths by such committees will be forwarded to the State Health Society after being examined by the district magistrate.

According to the letter, a three-member committee will review the forwarded reports at the state-level and provide the details about deaths back to the health society, where the list of Covid-19 deaths will be updated.

Experts said that there was no harm in reviewing the applications of pandemic-related deaths, but it was not feasible or practical in a state where the health infrastructure is in a shambles, hospitals and doctors do not provide proper documents to patients, laboratory tests are not easily accessible, and a severe scarcity of doctors force people in rural areas to visit quacks.

“It is for the government to decide whether its aim is to incorporate unaccounted Covid-19 deaths, or to reject the claims under the veil of verification. The latest directions seem aimed at the latter,” a civil surgeon told this newspaper on the condition of anonymity.

“The letter talks about verifying documents, but quacks working in villages don’t even provide prescriptions. A majority of private hospitals do not provide a clear cause of death. They just write things like cardiac arrest, respiratory failure, cardio-respiratory or cardio-pulmonary failure or failure of other organs. So who will decide and ascertain the cause of death?” the civil surgeon asked.

A senior doctor working with the state government pointed out that there were many instances in which rapid antigen tests and in a few cases even the RT-PCR test results came negative though the patient had all the symptoms of Covid-19.

“Most of the Covid-19 tests done by the Bihar government have been rapid antigen ones in which 40 to 50 per cent erroneous reports come. This aspect should be considered while evaluating the suspected pandemic deaths. The government could also opt for exhuming bodies to find out whether they were wrapped as per the Covid-19 protocol. However, not much can be done with regard to bodies that have been cremated,” the senior doctor said.

Bihar had revised the Covid-19 death figures from 5,478 to 9,429 on June 9 after Patna High Court had slammed the government over inconsistencies in death toll figures of Buxar district. The Nitish Kumar government had carried out a three-week audit that the high court had ordered amid allegations that the authorities were hiding the number of coronavirus infections and deaths.

The high court again pulled up the state government in its order on June 18 in cases related to Covid-19 deaths. It asserted that the public had the right to know about the pandemic deaths and the state’s “reluctance to publish the number of deaths was uncalled for”, which could not be protected in any court of law.

The letter by Amrit came in light of the June 18 high court order.

On June 19, NDTV came out with a report indicating that nearly 75,000 people died of unexplained causes in Bihar from January to May 2021 during the second wave of Covid-19. The figures also showed a huge jump of 82,500 deaths in Bihar during this period in comparison to the same period in 2020. The figures indicate that coronavirus could be a probable cause behind the jump in the number of deaths in Bihar.