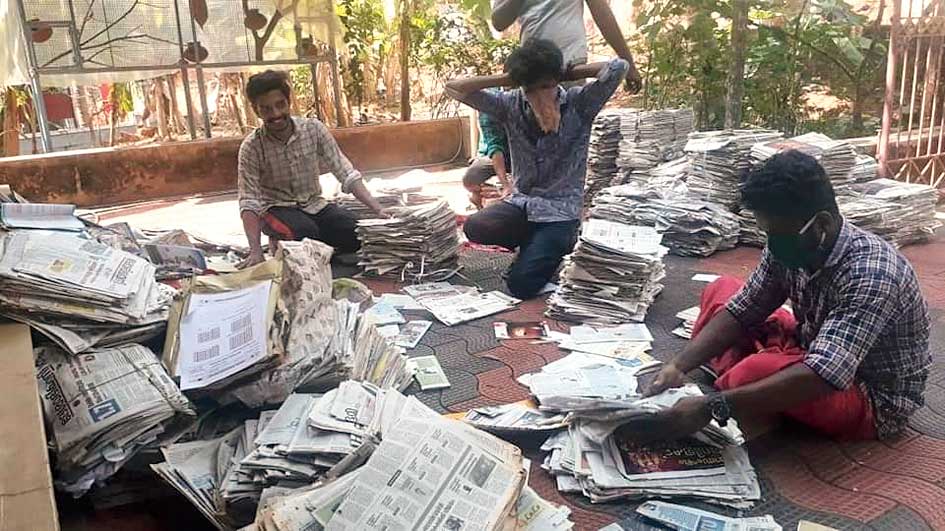 “I can safely say we have so far collected hundreds of tonnes of recyclable waste. We have also connected with buyers of these waste material,” DYFI state secretary A.A. Rahim told The Telegraph on Saturday.
Sourced by Correspondent
K.M. Rakesh   |   Bangalore   |   Published 16.05.20, 08:17 PM

Waste has found new takers in the battle against the virus.

The Democratic Youth Federation of India in Kerala has been collecting recyclable waste to earn money for the chief minister’s disaster relief fund (CMDRF), showing that nothing is redundant in the effort to contain Covid-19 and also how people have been doing their bit.

Members of the DYFI, a mass organisation that acts as the CPM’s youth wing, have already collected tonnes of waste as part of its Recycle Kerala campaign.

“I can safely say we have so far collected hundreds of tonnes of recyclable waste. We have also connected with buyers of these waste material,” DYFI state secretary A.A. Rahim told The Telegraph on Saturday.

Rahim said it was the central government’s inadequate assistance that prompted his organisation to come up with the innovative effort to raise money for the relief fund.

The Centre had contributed a measly Rs 157 crore to the fund in early April, when Kerala had the highest number of Covid-19 cases in the country.

The state has since been at the vanguard of the battle and has flattened the curve of the virus but has in the process spent much of the Rs 335.29 crore the fund has collected so far.

No further financial assistance has come from the Centre despite repeated requests from the CPM-ruled state government.

Thousands of DYFI workers have been collecting recyclable waste material from houses across the state since the end of last month. Apart from old newspapers and plastic, they have been collecting unusable kitchen utensils made of recyclable materials like aluminum, among other items. “We have also been getting a lot of broken children’s toys that can be recycled,” Rahim said.

Some local DYFI units have come up with their own micro-programmes too, such as the Malappuram district unit that collected more than one lakh coconuts as part of the fund-raising drive.

People too have contributed in their own way. “A CPM sympathiser donated five cents (slightly more than 202 square metres) of land in Pathanamthitta. Since we can’t register the land in our names, we will transfer it to the government,” Rahim said.

The DYFI had conducted a similar drive on a smaller scale to raise funds after last year’s floods. “But that was not a state-wide operation. A few local and zonal committees collected old papers to contribute to the relief fund,” he said.

The DYFI leader said the waste being collected since last month was being stored to be sold to recycling plants, adding the drive served another purpose too. “While the objective is to raise funds for the CMDRF, we are also able to play a part in waste recycling and thus contribute to the preservation of our environment.”

The organisation has been reaching out to the needy, supplying essential items and cooked food ever since the lockdown started, apart from being actively involved in sanitising institutional quarantine centres at many places.

Another money-earning task that DFYI activists have been doing is clearing weeds and unwanted undergrowth in large compounds. “Any household can call us to clear the compounds before the rainy season starts. Here again, we charge the market rate which would go to the CMDRF,” Rahim said.

“Since this is the season of vector-borne diseases like dengue, keeping the surroundings clean will go a long way in reducing such infections.”

The monsoon is likely to hit Kerala on June 5 but, with more than usual rain forecast, Kerala has already begun preparations to find alternative accommodations in case people in low-lying areas need to be shifted.

DYFI workers have volunteered to clear water bodies of hyacinths to enable free flow of rainwater.