Many didn’t know of assistance 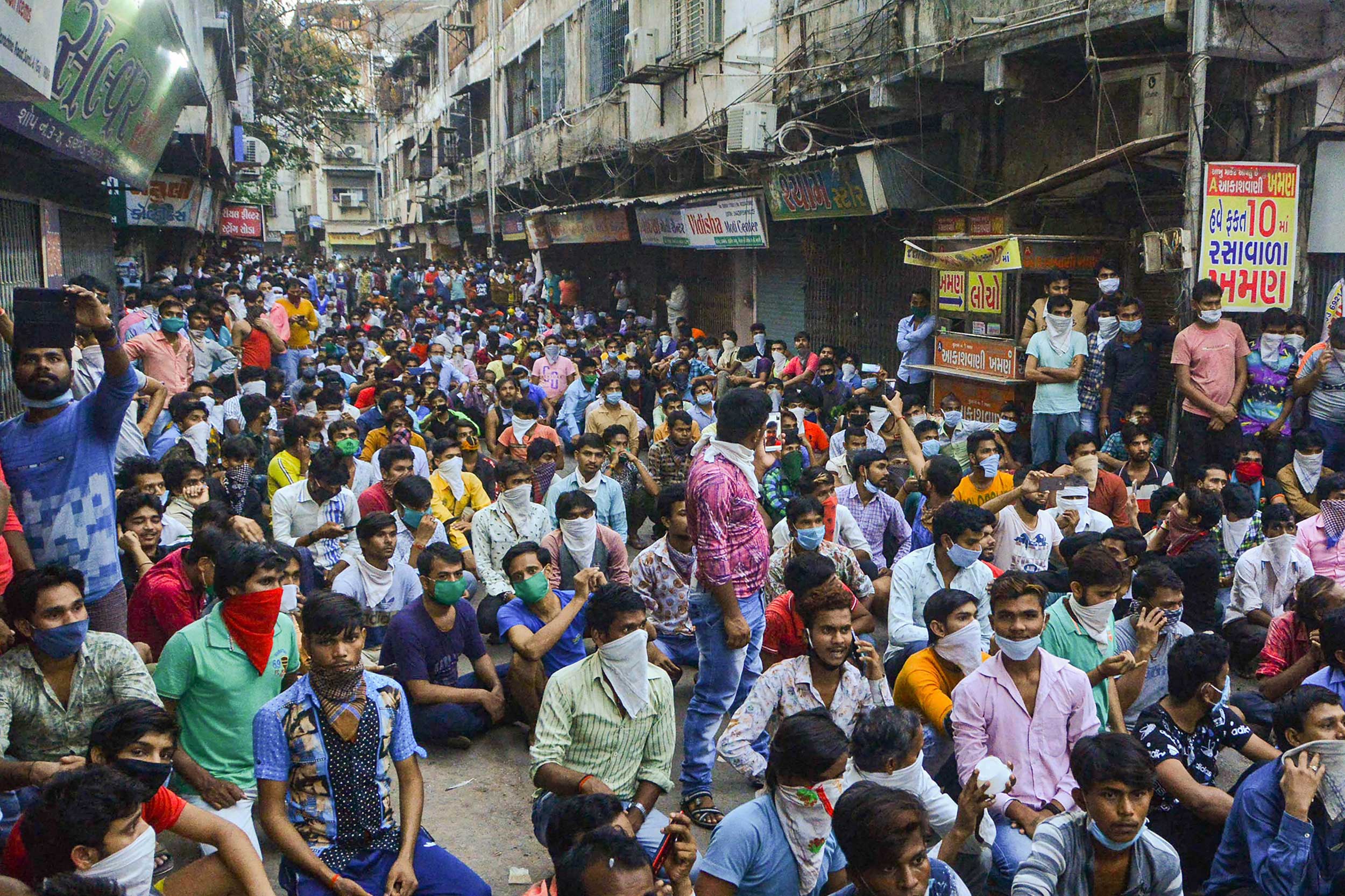 Nearly 96 per cent of a sample of lockdown-hit migrant workers did not receive any dry rations while 70 per cent lacked knowledge of or access to the cooked meals distributed by local authorities, a study has found.

The Stranded Workers Action Network (Swan), a group of researchers working on the implementation of the rural job scheme, tracked the migrant workers stranded across India between March 27 and April 13.

The respondents included 3,992 workers stranded in Maharashtra, 3,000 in Karnataka and 1,618 in Uttar Pradesh. The workers were mostly from Jharkhand (32 per cent), Bihar (25 per cent) and Uttar Pradesh (13 per cent). Swan’s report was released on Wednesday. 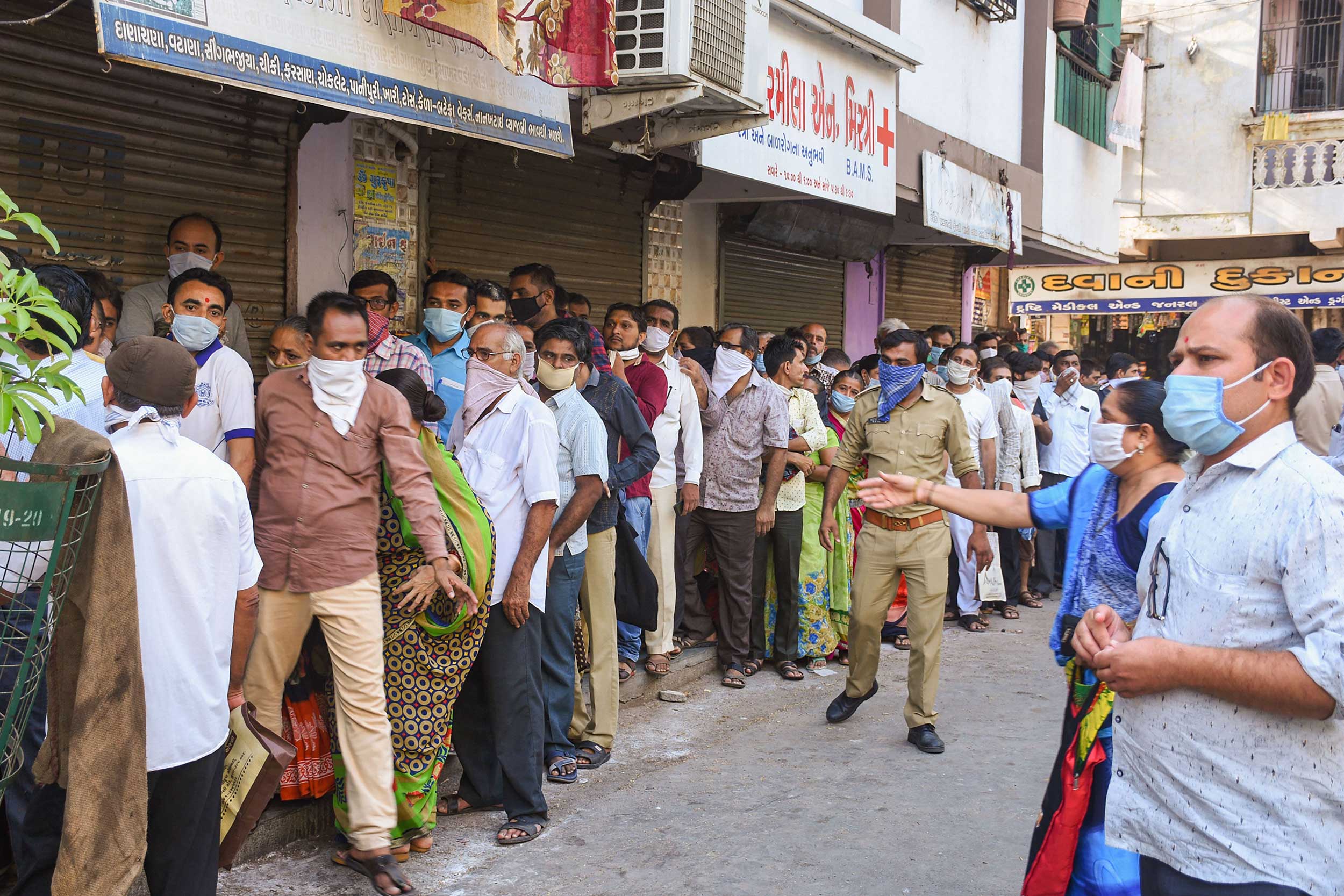 IGNORE SOCIAL DISTANCING: People stand in a queue to collect ration during the nationwide lockdown in Surat on Tuesday.
(PTI)

All the states are offering cooked meals to the migrant workers stranded in their territories, and some have made provisions to supply them with dry rations too.

Narayan said the principal reason most of the workers were not receiving dry rations was that they were not registered in the databases for migrant workers in the states where they worked.

“The Inter-State Migrant Workers Act and National Disaster Management Act require the states to register the migrant workers (working within their territories) so that in case of disaster they can be traced. Once registered, they get rations too. But these laws are not implemented,” he said.

Narayan said that most of the migrant workers in cities like Mumbai, Bangalore, Delhi and Coimbatore do not know anybody except the contractor who had brought them from their home states.

About 79 per cent of the migrant workers are daily wage earners engaged in manual work in factories and construction sites, he added.

Most of the workers the Swan team contacted said they did not know where the feeding centres were located. Many of those who went to these centres encountered huge crowds and did not get food every day.

Reports suggest that the picture is better in certain states such as Kerala and Delhi.

The Swan report said the percentage of migrant workers not to receive cooked food from the government or any local organisation fell from 80 per cent to about 70 per cent between the end of the second week of the lockdown and the end of its third week.

Eighty-nine per cent of the workers said their employers, mainly contractors, had not paid them at all during the lockdown. Narayan said the contractors had switched off their mobile phones.

While extending the lockdown till May 3, the Centre has not announced any additional relief, so the migrant workers’ distress is likely to increase, the report said. On Tuesday, hundreds of desperate migrant workers had gathered on the streets in Mumbai and Surat, demanding they be allowed to go home.

Swan’s report has recommended universalising ration delivery, a cash provision of Rs 7,000 per stranded worker, and more feeding centres so that all the stranded workers can be served.