Advertisement
Home / India / Final-year exams must for degrees: UGC
Varsities to decide whether to conduct online or offline tests

Final-year exams must for degrees: UGC

Universities will decide whether to conduct online or offline tests 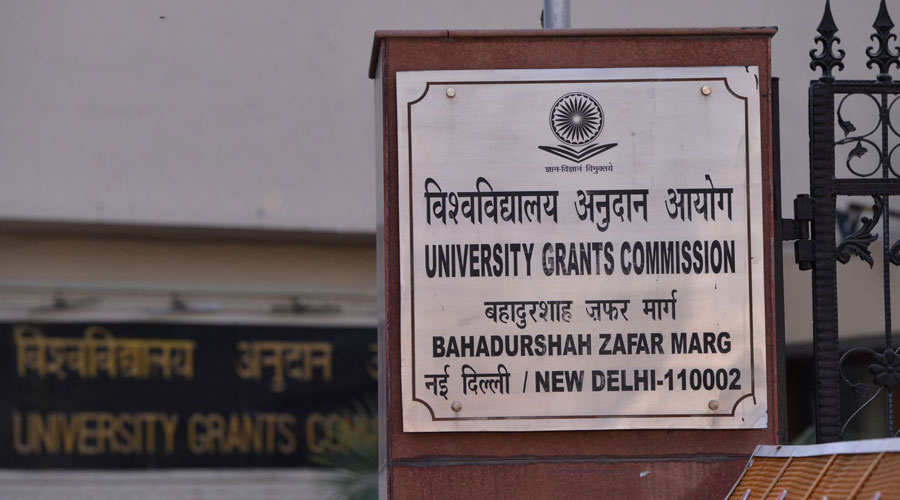 Final-year undergraduate and master’s students will have to appear in exams to get their degrees, the government announced on Monday, while relaxing the earlier July schedule by saying these tests must be conducted by September-end.

The universities will decide whether to conduct online or offline tests, the announcement by the human resource development (HRD) ministry said.

Many students and teachers were unhappy, saying pen-and-paper exams would threaten the examinees’ health while online tests —which they suspect the authorities will prefer — will leave rural and poorer students in the lurch.

However, the government said that students unable to take their final-year exams in September would get another chance to appear in “special” exams “as and when feasible”, PTI reported.

The home ministry had earlier in the day allowed educational institutions to conduct exams during the Unlock 2 phase (July 1 to 31) in keeping with the “standard operating procedure” approved by the Union health ministry.

Earlier in April, based on recommendations from an expert committee headed by R.C. Kuhad, the University Grants Commission had issued guidelines asking universities to hold exams for final-semester students, possibly in July, and promote other students on the basis of internal assessment.

But hopes of degrees being granted this year without exams had risen after a public appeal from HRD minister Ramesh Pokhriyal to the commission last Wednesday.

Alluding to the rising Covid-19 cases, Pokhriyal had requested the regulator to “reconsider the guidelines” keeping in mind the “health and safety (of) students, teachers and staff”.

But a revised report that the Kuhad committee submitted on Monday again endorsed exams for final semester students while recommending they be held in September, a senior commission official told The Telegraph.

He said the commission discussed the revised report and decided on exams, which the universities can hold entirely offline, entirely online or through a mix of offline and online papers.

Apparently, the state governments, mostly those run by the BJP, had opposed the award of degrees on the basis of internal assessment or previous exams.

“The possibility of not holding exams was discussed. But it would have left a blot on the careers of the batch passing out in 2020. In their interest, it was decided to hold the exams,” the commission official said.

“Performance in examinations gives confidence and satisfaction to the students and is a reflection of competence, performance and credibility that is necessary for global acceptability,” the commission’s revised guidelines say.

Pokhriyal on Monday said the revised guidelines had been formulated “in view of the safety, career progression and placements of the students and their larger interests, after consulting” the home and health ministries.

The decision comes at a time Delhi University (DU) is planning “open-book exams” (OBE) for its final-year students despite glitches blighting ongoing “mock tests” and widespread protests from students and teachers.

Sat Bhavna, a third-year DU Hindi honours student, said she had to climb onto the roof of her home to access the Internet from her mobile.

“I cannot access the question papers or upload the answers from my mobile phone. I cannot take the exams. Most of the time there is no Internet service on my phone,” Bhavna said from her village near Faridabad in Haryana.

Utkarsh Singh, another third-year DU Hindi honours student, who lives in Anglia village near Azamgarh in Uttar Pradesh, echoed her.

“There have been no online classes in the last semester, nor have we received any study material. Electricity fluctuation is an everyday problem. This OBE will damage our career,” he said.

Abha Dev Habib, former DU executive council member, opposed the OBE. “The majority of students in the universities, including Delhi University, are from poor families who have no access to computers or laptops,” she said.

“They are currently in their villages. They will miss out on the online open-book examinations being pushed by DU. This means those who ha-ve gadgets will get degrees and those who have not will have to stay back (in their classes). This is discriminatory.”

She said the students and the teachers were expecting relief from exams in view of the Covid-19 outbreak and Pokhriyal’s appeal. “This (commission decision) means the government does not bother about the health and well-being of the students. They want to push online examinations on the pretext of Covid-19,” Habib said.

As for the “special” exams for students who miss out in September, DU executive member Rajesh Jha said holding tests in different months meant assessing the same batch by two yardsticks, which “compromises the sanctity of the exam”. Besides, he said, online exams like the OBE that the students will take from their homes without any supervision will facilitate large-scale malpractice.