A member of the G-23 group of dissenters, senior leader quit Grand Old Party days after the Udaipur brainstorming session 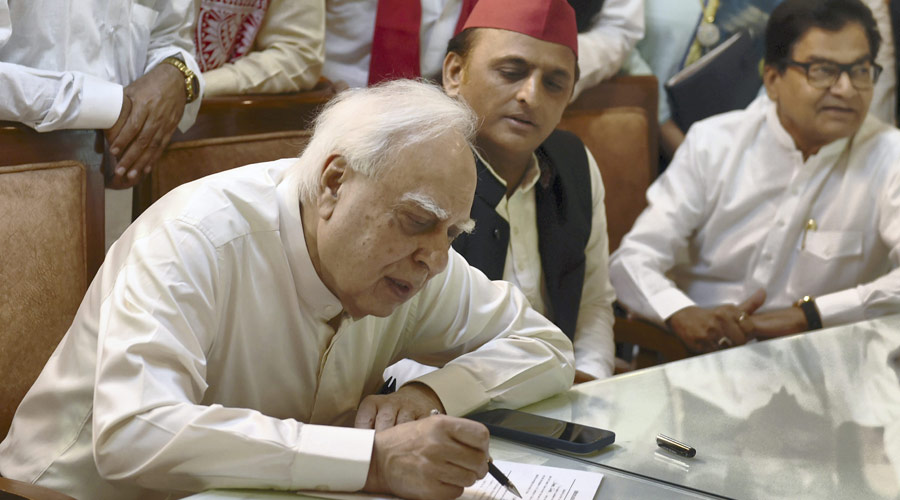 Announcing that he had resigned from the Congress last week, Kapil Sibal on Wednesday filed his nomination for the Rajya Sabha as an Independent supported by the Samajwadi Party.

Sibal, whose exit is another jolt for the electorally battered Congress, said his ideology is related to the party he has been with for three decades.

A prominent member of the G23, which had sought an organisational overhaul in the Congress, Sibal's tenure as Congress' Rajya Sabha MP ends in July.

"I have filed the nomination as an Independent candidate. I thank Akhileshji for supporting me," Sibal told reporters here.

"I resigned from the Congress on May 16 and am no longer a senior Congress leader," he said. The SP chief later said Sibal was being supported by the Samajwadi Party.

On his leaving the party, Sibal said, "I had a deep relation with the Congress. It was for 30-31 years. This is not a small thing. I joined the Congress because of Rajivji (former prime minister Rajiv Gandhi). You must be thinking, how one can go from the Congress after 31 years. There must be something (for leaving the party).. that my heart is facing. Sometimes such decisions are to be taken."

"But my ideology is related to that of the Congress. I am not far away from the Congress and its ideology. I am with the sentiments of the party," he said.

Sibal, who has been vocal in his criticism of the Congress leadership, had called for a non-Gandhi as the new party chief.

"We are all constrained by the fact that we are members of parties and have to abide by the discipline of that party but it is important to have an independent voice. When the voice of an independent is raised, people will feel that he is not associated with any other party," he said after filing his papers.

"We want to make a coalition and oppose the Modi government. We want to create an atmosphere in which we can oppose the BJP. I will personally work towards that," he said.

Asked whether his ideology now will be of the Samajwadi Party, Sibal said, "I am with all inclusive ideologies. Be it of the SP, RLD, Mamataji (West Bengal Chief Minister Mamata Banerjee) or Stalin (Tamil Nadu Chief Minister MK Stalin)."

Sibal's resignation comes close on the heels of Sunil Jakhar and Hardik Patel resigning from the Congress, which recently held a 'Chintan Shivir' in Udaipur.

Elections for 11 Rajya Sabha seats of Uttar Pradesh are underway.

On the SP's support to Sibal, Akhilesh Yadav said, "Kapil Sibal is a senior leader and a known lawyer. He had been in the Lok Sabha and Rajya Sabha and put his point across well everywhere. I hope he will put his views on big questions of unemployment and inflation, insecure borders and China..."

There had been speculation that the SP could field Sibal as a Rajya Sabha candidate. He was the lawyer who secured senior SP leader Azam Khan's bail.

Khan had been in Sitapur jail for over 27 months in various cases lodged against him in Rampur. His supporters said he wanted Sibal to go to the Rajya Sabha with the SP's support.

The SP has a strength of 111 in the 403-member assembly and can send three members to the Upper House of Parliament.

Asked about the other two candidates of the party, Akhilesh Yadav said, "It will be declared soon. You all will come to know about it."

The BJP has 255 members in the Uttar Pradesh assembly and can send eight members to Rajya Sabha.