UP CM claimed that had the BJP been in power in Chhattisgarh, the Naxal attack on a BJP MLA would have been avoided 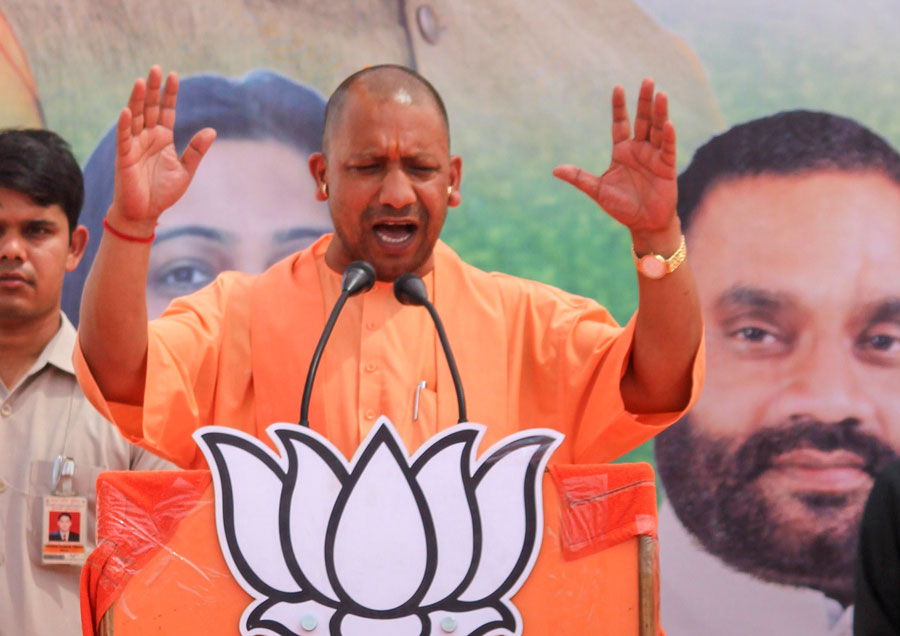 Uttar Pradesh Chief Minister Yogi Adityanath accused the Congress of being hand in glove with anti-nationals and said its manifesto for the Lok Sabha election promotes terrorism and Naxalism.

Addressing an election rally in Ambikapur town under the Surguja Lok Sabha constituency in Chhattisgarh, he also alleged that the Congress government in the state was not serious about tackling Naxalism and the killing of BJP MLA Bheema Mandavi in an IED blast in Dantewada earlier this week was its example.

Time has come to teach a lesson to those who raise questions over the existence of Ram, he said.

'We will avenge the insult of Lord Ram,' he vowed.

Highlighting various schemes launched by the BJP-led central government, he said, 'Modi ji has been working to fulfil the dream of 'ek bharat, shrestha (superior) bharat'.'

The Congress government is not serious in tackling terrorism and Naxalism and the recent killing of BJP MLA is its example.

'If you want to see law and order then come to Uttar Pradesh,' he said.

Mandavi and four police personnel were killed on April 9 in a Naxal attack in Dantewada district of the state.

'Had the BJP been in power now, this (Naxal attack on BJP MLA) could have been avoided,' he said.

Adityanath also accused the Congress of denying benefits of the welfare schemes to the people in the state, he said, 'Mafia raj of the Congress in the state is trying to end various schemes like Ayushman Bharat Yojana, meant to benefit the people, and were operational in the previous Raman Singh government.'

In Chhattisgarh, mining and land mafias have become influential (after Congress came to power), he alleged.

He also appealed to people to vote for Modi to make him the prime minister again.

BJP has fielded its former MLA Renuka Singh in Surguja (ST) Lok Sabha constituency, which will go to polls in the third phase of election in the state on April 23.

Congress has fielded its senior tribal leader and sitting MLA Khelsai Singh from the seat.