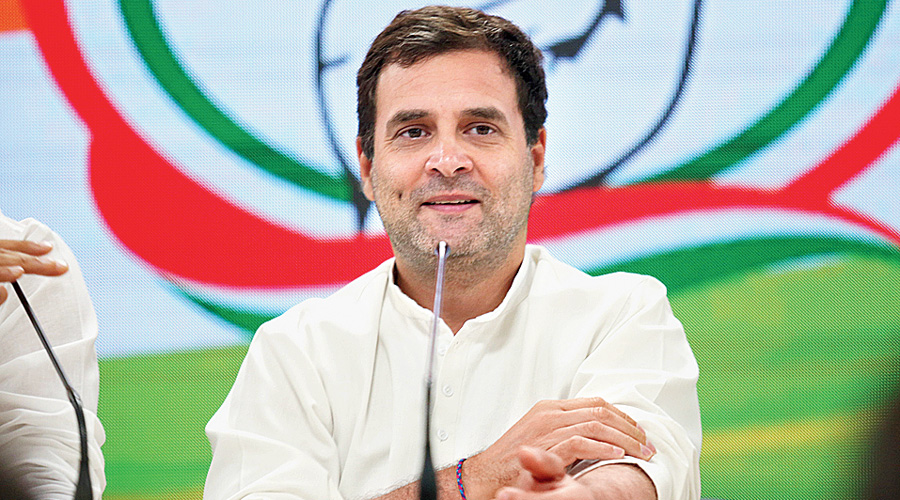 “No check on corona, no adequate vaccines, no jobs, no paying heed to Kisan-Mazdoor’s grievances, no safety net for MSMEs & middle class… eating ‘aam’ was fine but at least ‘aam aadmi’ should have been spared,” Rahul Gandhi tweeted.
PTI
Our Special Correspondent   |   New Delhi   |   Published 12.04.21, 01:24 AM

The Congress on Sunday accused Prime Minister Narendra Modi of pushing the country into crisis again by failing to prepare for a second wave of Covid infections and sought cancellation of the CBSE exams to protect young lives.

“No check on corona, no adequate vaccines, no jobs, no paying heed to Kisan-Mazdoor’s grievances, no safety net for MSMEs & middle class… eating ‘aam’ was fine but at least ‘aam aadmi’ should have been spared,” Rahul Gandhi tweeted.

His post came amid reports from parts of the country about a lack of adequate hospital beds, medicine and ventilators as India led the global charts for new Covid cases.

The Congress slammed Modi’s suggestion to celebrate a “tika utsav” (vaccine festival), saying Covid was a cause for concern, not celebration.

The party alleged that Modi and home minister Amit Shah had in their obsession with state elections ignored the constant rise in cases since February.

Rahul tweeted: “In the light of the devastating corona second wave, conducting CBSE exams must be reconsidered. All stakeholders must be consulted before making sweeping decisions. On how many counts does Government of India intend to play with the future of India’s youth?”

Party general secretary Priyanka Gandhi Vadra demanded cancellation of the CBSE exams, describing as “shocking” the board’s decision to hold the exams in May amid the rising Covid cases.

“Students prepare for these exams for months.... Yet lakhs of children and parents from all over India have been expressing their fears and apprehensions about assembling at exam centres... in the middle of the second wave of Covid-19,” she wrote to education minister Ramesh Pokhriyal.

Priyanka said it would be “practically impossible to ensure the safety of students at large and crowded exam centres”, and that the teachers, invigilators and students’ families would be at risk too.

Besides, “by forcing the children to sit for these exams during a raging pandemic”, the government and the CBSE would have “legal liability” if some of the exam centres “prove to be hotspots where large numbers of children become infected”.

“As state after state issues guidelines preventing the assembly of large numbers of people... what moral grounds can we stand on while forcing young children to do exactly that?” Priyanka wrote.

She spoke also of the possible psychological impact on the children.

“They already face the immense pressure of the exams; in addition, they will now be fearing the conditions in which they will be taking them,” Priyanka wrote.

“Being forced to sit for exams donning masks, gloves and other protective gear under the spectre of a deadly disease will cause unnecessary anxiety to these children and impact their ability to perform as well.”

She hoped the government would hold “a dialogue with schools, students and their parents so that a safer way for them to fulfil their educational obligations can be found”.

He added: “Having messed up the management of the production and supply sides of the vaccines, the government is covering up its massive failure through rhetoric and hyperbole.

“We were the first to demand universal vaccination and get(ting) rid of the silly app and the need for pre-registration. Vaccination must be a walk-in programme. The government must immediately provide funds to ramp up production in India and increase supplies.

“The government must also authorise the use of more approved vaccines and allow their manufacture or import. We have a duopoly of two vaccines, but they are hardly sufficient to vaccinate a nation of 138 crore people.”

Covid surge casts a cloud on board examinations