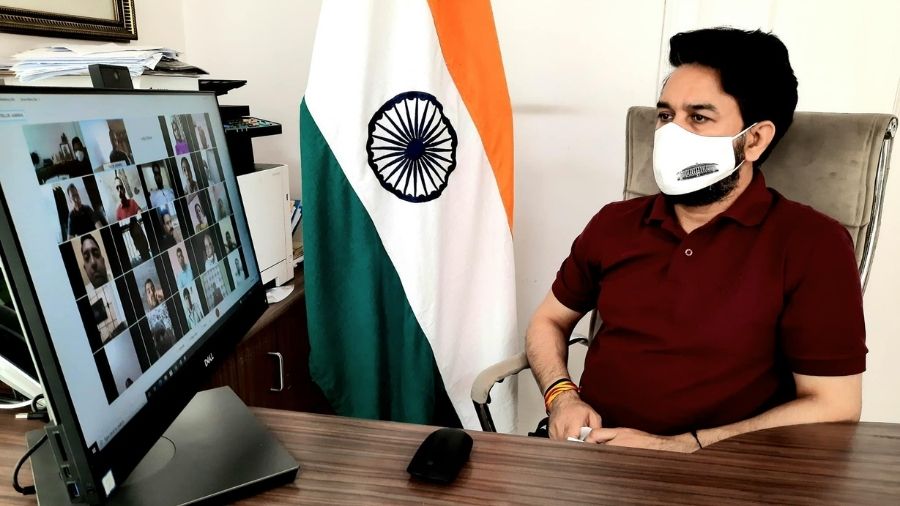 Hitting back at former Finance Minister P Chidambaram for his comments on the economy, Minister of State for Finance Anurag Thakur on Wednesday said India's growth will rebound on the back of consistent reforms and strong fundamentals.

"Indian economy is resilient and will rebound in the times ahead based on consistent reforms that have ensured strong fundamentals through these difficult times.

"I am not surprised that the former finance minister chose to ignore hard data and instead went ahead with 'whataboutery' - the Congress leadership has embodied this clueless approach over the years," the Union minister said in a press release.

Consistent reforms and strong fundamentals have ensured that India had a swift rebound from a contraction of 24.4 per cent in the first quarter to a growth of 1.6 per cent in the fourth quarter of FY 2020-21, he pointed out.

On Tuesday, Chidambaram termed the financial year FY 2020/21 as "the darkest year of the economy in four decades" and said the record negative growth has left "most Indians poorer than they were two years ago".

Chidambaram had slammed the government for misleading the people, a reference to the "green shoots" claims of the finance ministry in July last year, after the first wave peaked and also for mishandling of the country's finances.

India's economy -- which was experiencing a slowdown even before the pandemic broke out last year -- contracted 7.3 per cent during April 2020 to March 2021 fiscal (FY21), weighed down by nationwide lockdown that pummelled consumption and halted most economic activities.

This is the first full-year contraction of the Indian economy in the last four decades since 1979-80 when GDP had shrunk by 5.2 per cent.

On the issue of the gloomy forecast made by the former finance minister, Thakur said, "while you doubt the resilience of Indian entrepreneurs, small businesses, traders and MSMEs to revive themselves, various international agencies project India to grow by 12.5 per cent in FY 2021-22 making India the only major economy to have a projected double-digit growth".

"Is the Indian economy an island in isolation; have other major economies not faced a GDP contraction? Are you not aware that France, Germany, Italy, the UK contracted by 8.2 per cent, 4.9 per cent, 8.9 per cent and 9.9 per cent, respectively," Thakur said.

He also noted that Canada, Russia, South Africa, USA too have seen contraction in their GDP in the past year and that despite the disruptions in the globalised world, India has remained resilient.

Further, the minister urged Chidambaram to shift gears from his gloom and doomsday prediction and stressed that lockdown saved lives while gradual unlocking allowed green shoots.

On the issue of cash transfer to poor and farmers, Thakur said that during the NDA tenure (2014-19), the government disbursed Rs 8 lakh crore on procurement of wheat and rice as compared to Rs 3.74 lakh crore during the UPA tenure (2009-14).

By opening 42 crore Jan Dhan accounts, Modi government has stopped leakages in the system ensuring every rupee reaches its intended beneficiary swiftly and even during the COVID pandemic, through Direct Bank Transfer (DBT), it provided financial support to millions, Thakur said.

He reminded the former finance minister that DBT was also given under NSAP (National Social Assistance Programme) to widows, divyangs, senior citizens, to building and construction workers as well as to front load PM-KISAN for farmers and to make 24 per cent contribution to EPFO and Ujjwala.

Noting that total transfers exceed Rs 68,000 crore, Thakur wondered whether these are not "cash in hand".

While the UPA government during your (Chidambaram) tenure as the finance minister disbursed bad loans, Thakur said, Modi government provided Rs 3 lakh crore government guarantee through the ECLGS scheme to the industry to sustain and revive their businesses.

Over Rs 2.65 lakh crore has been sanctioned by public and private sector banks, and NBFCs to over 92 lakh accounts as part of "cash flow for businesses" under the Emergency Credit Line Guarantee Scheme (ECLGS), he added.