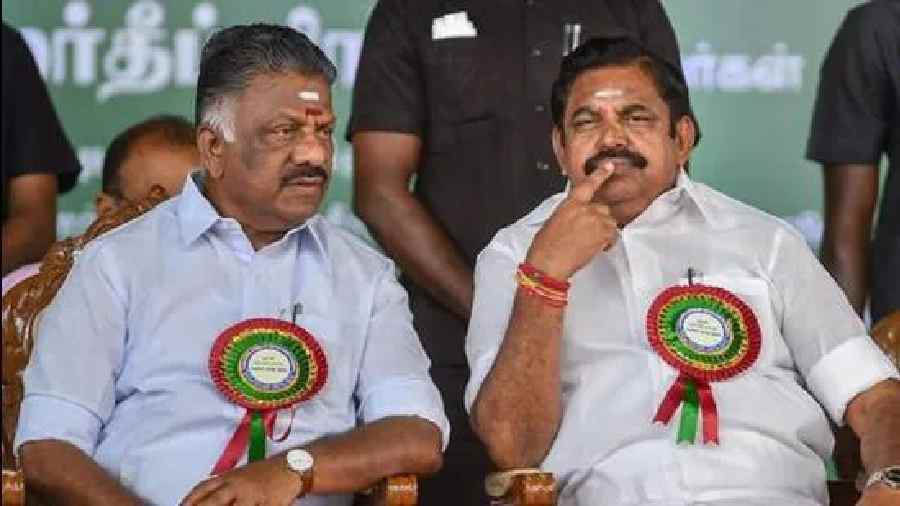 Two groups of suspected AIADMK workers clashed outside the party headquarters here, police said, on a day when the dominant faction led by Edappady K Palaniswami is set to elect him possibly as the single leader of the organisation in a crucial General Council meeting.

The Madras High Court will pronounce its order today at 9 am on a plea by Mr Panneerselvam or OPS to stall a crucial party meeting which will decide the future leadership structure of the party. The meeting is scheduled to begin at 9:15 am, reports ndtv.com

On his part, former Coordinator O Panneerselvam (OPS) arrived at the party office, along with supporters, while EPS was on his way to a marriage hall in the city where the General Council meet is slated.

However, the conduct of the meeting hinges on the outcome of a Madras High Court verdict that will rule on a plea by rival OPS against holding GC, the party's highest decision-making body.

Holding that the court cannot interfere into the squabbles of a political party, the Madras High Court on Monday rejected a plea from AIADMK leader and former Co-ordinator O Panneerselvam to stay the conduct of the general council meeting of the party at a marriage hall here on July 11, virtually making way for rival leader Edappady K Palaniswami's elevation as a possible single leader of the party.

Justice Krishnan Ramaswamy delivered the verdict on Monday morning, which allowed the EPS faction to hold the GC meet, the supreme decision making body of the main opposition party in Tamil Nadu.

After hearing the lengthy arguments of the senior counsels for OPS and EPS, the judge had on July 8 reserved the orders for today.

The court also dismissed another suit challenging the GC meeting.

The GC meeting can be conducted in accordance with the law, the judge said.

On Monday, two groups, suspected to be supporters of either leaders and carrying AIADMK flags clashed with each other, with TV visuals showing some persons hurling stones at each other and some damaging vehicles parked nearby.

Meanwhile, some men were seen forcing their way into the party office by breaking open the doors.

Security has been beefed up at the AIADMK office, MGR Maaligai, named after party founder, the late Chief Minister M G Ramachandran.

Later, Panneerselvam arrived at the party office, flanked by his supporters including R Vaithilingam and Manoj Pandian.

Panneerselvam greeted his supporters from a portico and also waved the party flag.

There were "Ayya OPS vazhga" (hail OPS sir) slogans by his supporters.