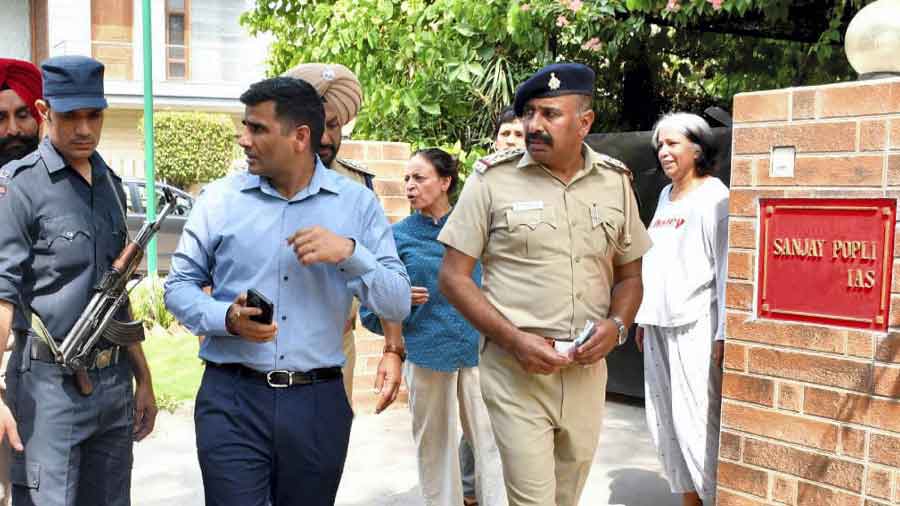 A 27-year-old son of IAS officer Sanjay Popli, who was arrested in a graft case, died of bullet wound here on Saturday, with police saying he committed suicide but family alleging foul play.

A Vigilance Bureau team had come to the officer's house in connection with the investigation of the case against him and they were present there when the incident took place, a neighbour told reporters.

However, a Vigilance Bureau official said they had left the house before the incident took place.

The Punjab Vigilance Bureau had earlier this week arrested IAS officer Sanjay Popli in a graft case for allegedly demanding bribe in exchange of clearing tenders for laying a sewerage pipeline in Nawanshahr.

Chandigarh's Senior Superintendent of Police Kuldeep Singh Chahal said after verifying things it has come to the fore that the 27-year-old "shot himself".

Further investigations are on, the SSP said, adding a licensed pistol was used in the incident.

An inconsolable Sanjay Popli's wife told reporters, "The Vigilance officials were pressuring us and they were even torturing my domestic help to give false statements in support of the case they have registered. My 27-year-old son is gone. He was a brilliant lawyer. They have snatched him".

"To build a false case, they snatched my son--Kartik Popli is gone," said Sanjay Popli's wife showing blood spots of his son on her hands.

"I will not wash these hands till we get justice. I want justice. I will move court," said the wailing woman, repeatedly crying "my son has been killed".

She claimed that the Vigilance officials took Kartik upstairs.

"When I went up they were mentally torturing my son," she said, adding "even our mobile phones were snatched".

A 51-year-old woman, a neighbour and family friend, alleged that "Sanjay Popli was being pressured by the Vigilance that he should agree to the allegations levelled by them".

"Kartik Popli too was detained for hours," said the woman.

On the other hand, Vigilance Bureau DSP Ajay Kumar told reporters, "We had returned from their house after making some recoveries. We had returned with the accused."

"Who all were part of our team, that details have been given in the Sector 11 police station here," he said.

When asked that the family is alleging foul play, he said these are baseless allegations.

"Our recovery point was not inside the house, it was in the premises. None of our team member went inside," he said.

He also denied the family's allegation that some team members manhandled them.

The spokesperson said these were concealed in the storeroom of his house.

Meanwhile, the Congress hit out at the AAP government over the death of Popli's son, with party's state unit chief Amrinder Singh Raja Warring saying, "Making law takes its own course & dramatising the process for vested interests that cost a precious life is unpardonable..Who will bring back Kartik?."

"Shocking! Profound condolences & sympathies for Sanjay Popli who lost his son Kartik under tragic circumstances," Warring tweeted. The Aam Aadmi Party expressed condolences over the death of Kartik, with party spokesperson Malwinder Singh Kang saying, "We are all deeply saddened to hear about the suicide of Sanjay Popli's son".

Kang said "during Vigilance raids, gold, silver and cash worth crores of rupees were recovered from Popli's house".

"The corruption of IAS officer Sanjay Popli had a bad effect on his son. All corrupt people need to learn a lesson from this incident that corruption is ruining their families," said Kang, according to an AAP statement.

Kang slammed the opposition for "standing in favour of a corrupt person" and said they should not do politics on this matter.