DM refutes reports of pressurising family, says last rises were performed as per their wish 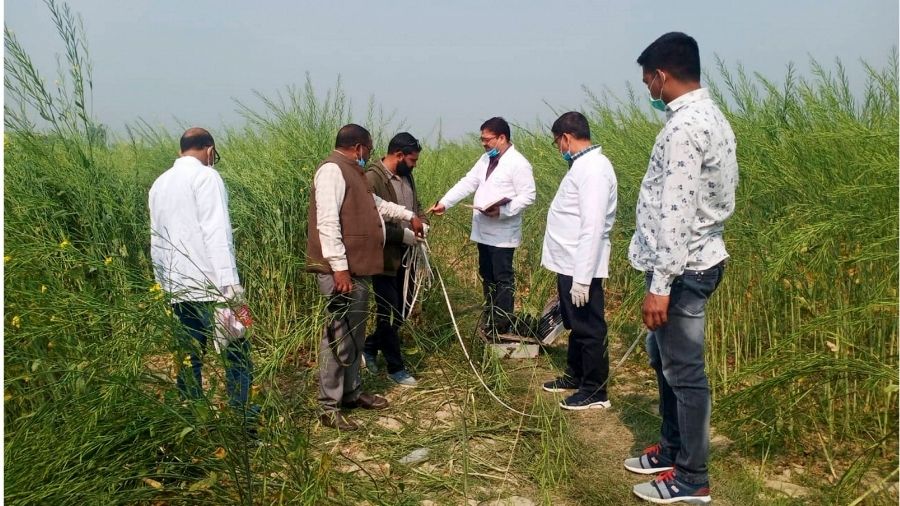 Three girls -- aged 16, 15 and 14 -- were found in a field by the villagers on Wednesday night when they did not return after leaving their house to take fodder for cattle.

The local residents had rushed the teenagers, who are all related to each other, to a hospital where two of them were declared brought dead. The 16-year-old girl was rushed to a district hospital and later referred to a Kanpur healthcare facility where she is presently undergoing treatment, police said.

On Friday morning, the bodies of Komal (15) and Kajal (14) were buried in their agriculture fields in the presence of senior officials and police personnel in large numbers.

The bodies were brought to their village after a post-mortem was done on Thursday but the last rites could not be performed on the day, police said.

With regard to performing the last rites, Unnao District Magistrate Ravindra Kumar said talks were held on Thursday with the deceased girls' family, who were not willing to take it up immediately as they were waiting for their son to arrive from another city and had also cited that the funeral can not be done as it was already sunset.

The DM refuted reports of any pressure being exerted on the family and said that the last rites were performed on Friday as per the wishes of the family.

When asked if the family has made any demand, the DM said no letter has been given by the family to the administration and state government.

However, some outsiders present in the village on Thursday were making the family members write a letter stating their demands and the administration had come to know about it.

Our officials, including the ADM, were present on the spot but the family has so far not given any "demand letter" to us, Kumar added.

The DM claimed that despite the presence of some outsiders, there was peace in the village.

The district unit president of BJP, Raj Kishore Rawat and local MLA Anil Singh were present during the funeral on Friday.

The district officials had made elaborate arrangements with heavy deployment of security personnel and barricades being installed. The security covered about one kilometre on the four paths reaching the village with a magistrate-level official posted at every barricade to check people. Personnel from six police stations were also deployed for cover.

Director General of Police Hitesh Chandra Awasthi had said on Thursday, "The post-mortem of the two girls was done by a panel of doctors and no injury before death or external injuries were found on their bodies.The cause of death could not be ascertained and viscera has been preserved for chemical analysis."

"We are taking help of forensic experts and looking into all possibilities," the DGP had said.

A medical bulletin by the Kanpur hospital treating the third girl had noted that it was a suspected case of poisoning.

Apart from Section 302 (murder), the FIR also lists Section 201 of the Indian Penal Code, related to causing disappearance of evidence. The case mentioning the two sections was lodged on the basis of the family's complaint, the police had stated.