Sengar, the BJP MLA from Unnao, was suspended from the party on Thursday 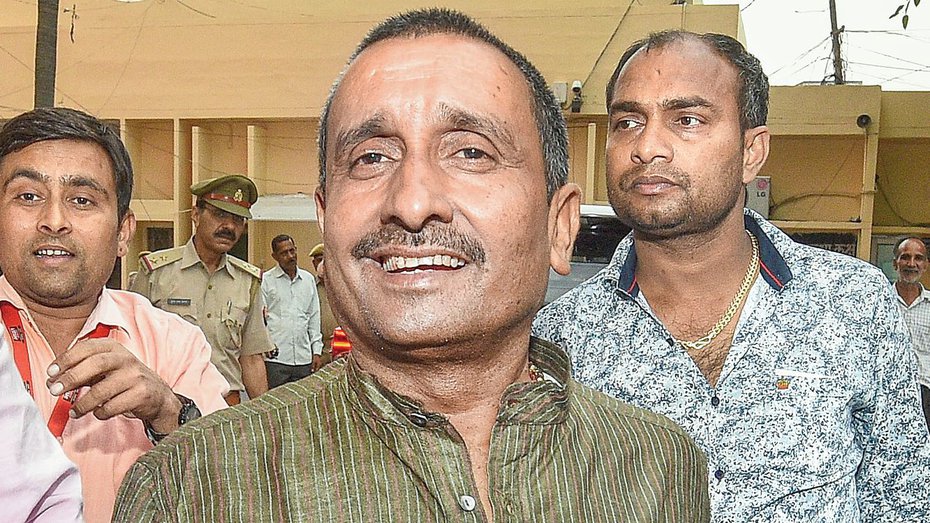 Asked about its MLA’s open support for the rape and murder accused, the BJP merely said it had taken action against Kuldeep Singh Sengar.
PTI
Our Special Correspondent And PTI   |   Lucknow   |   Published 03.08.19, 08:19 PM

A BJP MLA in Uttar Pradesh has been caught on camera expressing a wish that at least a dozen of his colleagues have been voicing in private: that “brother” Kuldeep Sengar, in jail for the gang rape of a teen who is battling for life after a road crash that he is accused of plotting, will be free soon.

“Our brother, Respected Kuldeep Sengar ji, is going through difficulties, troubled times. All our good wishes are with him, he will fight all the troubles and return to lead you,” BJP’s Hardoi MLA Ashish Singh is seen and heard saying in a video that is viral on social media. “Our best wishes are with him.”

Sengar, the BJP MLA from Unnao, was suspended from the party on Thursday, 15 months after the CBI arrested him in the rape case and only after a huge public outcry over the road crash that killed two of the rape victim’s aunts and left the teen and her lawyer battling for life. Even till Saturday, the BJP had not written to the Assembly Speaker to disqualify him, so Sengar remains a party MLA.

Singh could not be reached for comment, but a source close to him said he had spoken at a meeting of BJP workers in a village in Unnao on August 1.

Asked about its MLA’s open support for the rape and murder accused, the BJP merely said it had taken action against Sengar. “So far as the BJP is concerned, whatever disciplinary action it had to take, has been taken. Sengar has been expelled. Unless one is proved guilty, one is innocent in the eyes of the law. Maybe the MLA (Singh) spoke on these lines,” party spokesperson Rakesh Tripathi said.

Sengar’s arms licences for a single barrel gun, a rifle and a revolver were cancelled on Friday, some 15 months after he was arrested by the CBI on April 13, 2018.

The CBI, which has taken over the investigation into the July 28 road crash in which Sengar is the prime accused, questioned the MLA in Sitapur jail on Saturday.

The agency, which has to complete the investigation within a fortnight as ordered by the Supreme Court, also sent a team to the victim’s village in Unnao. No one from her family was present in the village at the time.

A CBI team visited the Lucknow hospital to speak to the girl’s family.

In Rae Bareli, another CBI team recreated the sequence of events of the crash and questioned the driver and cleaner of the truck that had rammed into the car in which the victim was travelling with her aunts and lawyer.

Other than a team of 24 officers deployed in Lucknow, Rae Bareli and Unnao, another special team of 20 members, including six forensic experts, is working round the clock to complete the investigation by August 14.

“Thank you to all the girls from Lucknow for coming out so strongly in support of #UnnaoKiBeti, if all of us stand together, we can force those who empower rapists and criminals into consciousness and change,” she wrote.