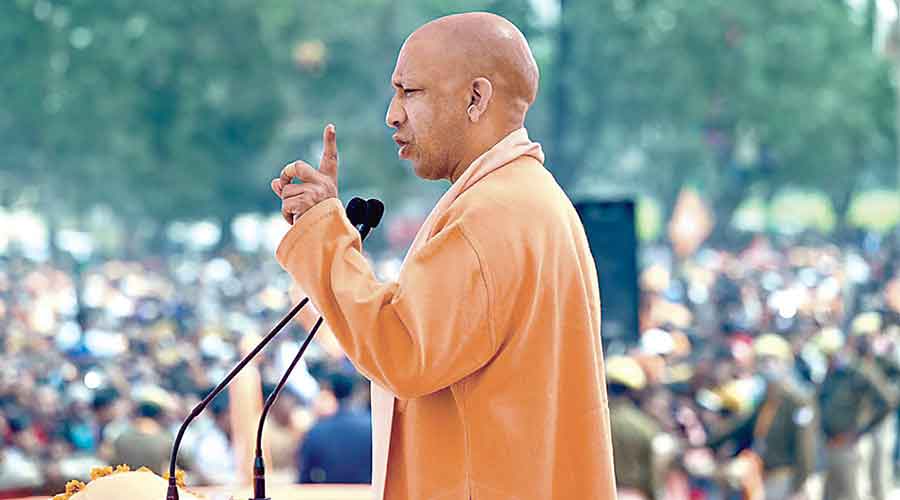 The BJP changed its perception about Azamgarh which faced an identity crisis earlier due to narrow-minded divisive forces, Uttar Pradesh Chief Minister Yogi Adityanath said on Thursday in his first visit to the district after the saffron party's victory in the recent bypoll from the Samajwadi Party bastion.

The apparent reference was to the terror tag attached to the district in the past. Some of the accused involved in the 2008 Ahmedabad serial blasts and Delhi's Batla House encounter hailed from this area.

Adityanath was in Azamgarh for the first time after winning parliamentary bypolls, on the seat left by Samajwadi Party chief Akhilesh Yadav, to launch 50 development projects worth about Rs 145 crores.

"Due to 'rajnatik sankirnta' (political narrow-mindedness) the talent became victim of the divisive forces in the national arena. This created an identity crisis among the youth of Azamgarh," the chief minister said.

"I am here to thank you all for ensuring the victory of your MP (Dinesh Lal Yadav alias Nirahua). I am indebted to you and I have come here to launch 50 developmental projects for you," Adityanath said.

The BJP had annexed Azamgarh seat vacated by Akhilesh after becoming an MLA in the recent by-election along with that in Rampur.

While Akhilesh had won from Azamgarh in 2019, his father Mulayam Singh Yadav represented the constituency in 2014.

The victory from the SP's citadel gave a psychological edge to the saffron party which they are trying to repeat in the 2024 general election.

While attacking previous regimes and holding them responsible for the sorry state of affairs in the area, Adityanath said, "Remember five years ago, the youth of Azamgarh had to hide their identities when they went out of the state. The reason was that if they disclosed their identity, they did not get room to stay in hotels and 'dharamshalas', no one was ready to give them room on rent in their localities. Just think what the person who left his place for a job must have felt."

In March, while addressing elections rallies at various assembly segments of the district, the chief minister had said that Azamgarh had become a "home of terror and criminals" during the SP government.

He said the perception of people changed after the BJP formed a government in the state. "Even when you, people of Azamgarh, did not have BJP MLAs and MP," the government ensured development here, the chief minister said on Thursday.

He said while Lucknow could be reached now in two hours by road, the travel time to the national capital has come down to seven hours.

Without naming anyone, he said, "For years there was a demand that a university should be established in Azamgarh. Earlier many people came to Azamgarh but the university was also given to Azamgarh by the 'double engine' government. The university is being built on a war footing in the name of Maharaja Suheldev and Rs 108 crore has been earmarked for it."

The chief minister asked people's representatives to organise 'rozgar mela' (employment fair) in Azamgarh so that youths here get appointment letters, and said that in the past five years jobs were provided to 5 lakh people without any discrimination.

He asked officers to generate employment opportunities for youths to change the image of the district.

He said that the District administration should send a proposal for the establishment of a paramedical institute in the medical college and suggested that as the people elected a Bhojpuri singer from here, some work in the area of art should also be done.

Adityanath later paid a visit to Hariharpur village, the native place of some of the legendary musicians, such as the late Pt. Shamta Prasad (Gudai Maharaj), Sharada Sahay, the ancestors of Birju Maharaj and Padma Bhusan awardee Chhannulal Mishra.

He announced a better road facility in the village of classical musicians and also steps to revive the tradition of music in the place.