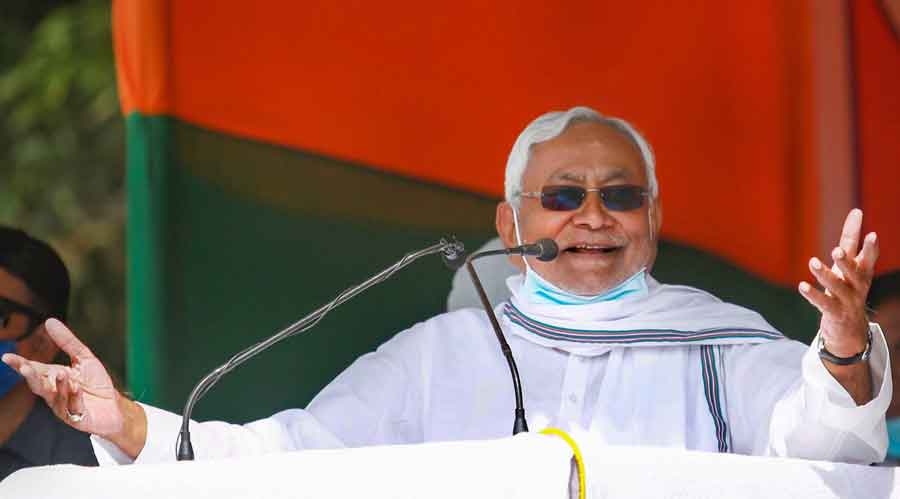 The Bihar Assembly poll results have left chief minister Nitish Kumar in a bind: his JDU has slipped sharply and there are murmurs whether he would return as chief minister even if the NDA retains its lead and comes back to power.

Till late night, the JDU was leading in just 42 of the 115 seats it had contested, down by around 30 seats from its 2015 tally. Nitish’s party was in third position in Bihar and had become the junior partner of the BJP.

BJP Scheduled Caste cell president Ajit Kumar Chaudhary said party workers were demanding a BJP chief minister. “The poll mandate is for the BJP. Its seats are more than the JDU’s. There is a strong feeling among our colleagues that somebody from our own party should become chief minister,” Chaudhary said.

Nitish spent the day closeted in his 1 Aney Marg residence. In the evening, deputy chief minister Sushil Kumar Modi and MP Bhupender Yadav of the BJP called on him. Sources said Union home minister Amit Shah had spoken to Nitish.

The question doing the rounds is whether Nitish will accept becoming the chief minister again if the NDA wins or decide to step aside.

“The very question whether Nitish Kumar will be the chief minister or not is irrelevant. The BJP has already announced him as the chief ministerial candidate of the NDA,” JDU Bihar unit chief and Rajya Sabha member Bashistha Narain Singh said.

JDU state executive president Ashok Choudhary pointed out that the NDA had fought the election with Nitish as the helm.

“Nitish’s face is of hope, trust, reliability, safety, peace and honesty. The polls were fought under his leadership. Whatever seats the NDA gets will be for making him the chief minister,” Ashok said.

Bihar BJP president Sanjay Jaiswal said: “When our leaders like Prime Minister Narendra Modi, Union home minister Amit Shah and party president J.P. Nadda have announced Nitish as our next chief minister, there is no question of deviating from it.”