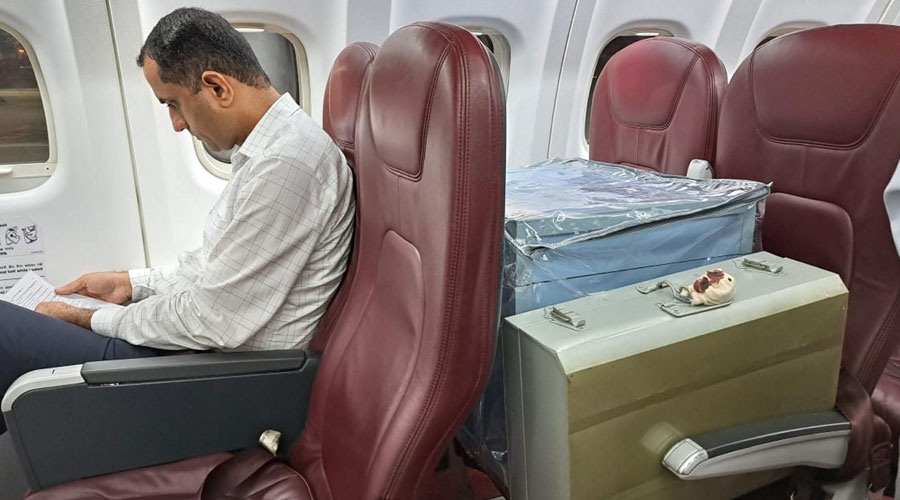 'Mr Ballot Box' carrying votes cast by the lawmakers in Monday's presidential election in states and Union territories, began their special journey back to the national capital soon after the closing hours of the polling process.

The ballot box from the Delhi Legislative Assembly had reached the strong room late Monday night while ballot boxes from Karnataka, Maharashtra, Gujarat, Assam and Rajasthan were brought here by separate commercial flights.

'Mr Ballot Box' occupied the front row seat in the aircraft escorted under the watchful gaze of the Assistant Returning Officers (AROs) of their respective states.

The Election Commission posted photographs of the sealed ballot boxes onboard flights accompanied by the respective AROs.

The ballot box from Telangana was shown being taken to a strong room in Hyderabad before it started its journey to the national capital on Tuesday.

An Election Commission functionary said the ballot boxes from state capitals which have direct early morning flights for Delhi would reach here by Tuesday noon.

The ballot boxes from states which do not have direct flights will arrive by Tuesday evening.

Ballot boxes from Himachal Pradesh are likely to be brought by road.

A ballot box carrying votes cast by the lawmakers in the presidential election in the state of Himachal Pradesh being taken to a Delhi-bound flight, at the airport in Chandigarh.

According to the EC, each ballot box is issued an e-ticket under the name Mr Ballot Box.

Elected MPs and MLAs are entitled to vote in presidential elections, therefore voting takes place in the Parliament house and state legislative assemblies.

The Election Commission said polling was held between 10 am to 5 pm Monday at 31 locations including the Parliament house and 30 centres within state legislative assemblies.

The counting of votes is scheduled for July 21.