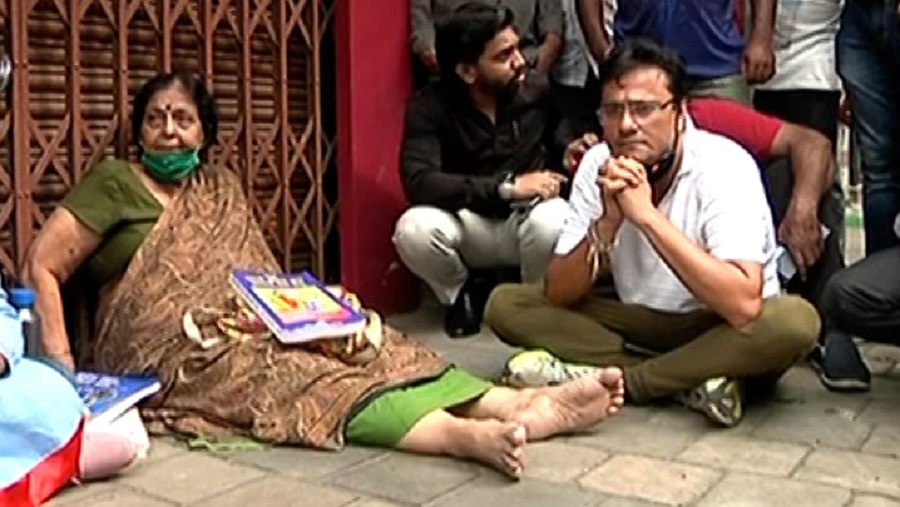 Marathi writer Shobha Deshpande staged nearly a 20-hour protest in Mumbai after a city-based jeweller allegedly refused to speak in Marathi and asked her to leave his shop where she had gone to make a purchase.

The jeweller on Friday apologised to the veteran writer, who had staged the protest overnight on the footpath outside his shop since Thursday.

Deshpande was later taken to a hospital for a medical check-up by the police.

The Raj Thackeray-led Maharashtra Navnirman Sena (MNS) backed the protest by Deshpande and warned the jeweller, Shankarlal Jain, that he will not be able to open his shop till he learns Marathi.

Speaking to a Marathi news channel, Deshpande said she had gone to the jewellery shop in Colaba, south Mumbai, to buy earrings.

During their conversation, the author insisted that Jain speak to her in Marathi.

His shop is in the capital of Maharashtra whose language is Marathi and he must know how to speak Marathi.

He said he cannot speak Marathi. I was speaking in Marathi and he did not.

"Since I did not speak in Hindi, he refused to sell me the earrings. He arrogantly asked me to leave the place, Deshpande alleged.

The writer said she demanded that the jeweller show the licence required to run the shop, but he refused.

When I called the police, they too took the jewellers side. Then I staged the protest, Deshpande alleged.

Jain on Friday morning apologised to the writer, who staged dharna for nearly 20 hours before being taken to the hospital.

Meanwhile, the MNS workers, who had arrived at the spot to express solidarity with Deshpande, were seen slapping the jeweller as he apologised to the writer.

"We were here to support the writer. We taught the jeweller a lesson for being arrogant. We have made him apologise. He will not be able to open his shop until he learns Marathi, MNS leader Sandeep Deshpande told the channel.