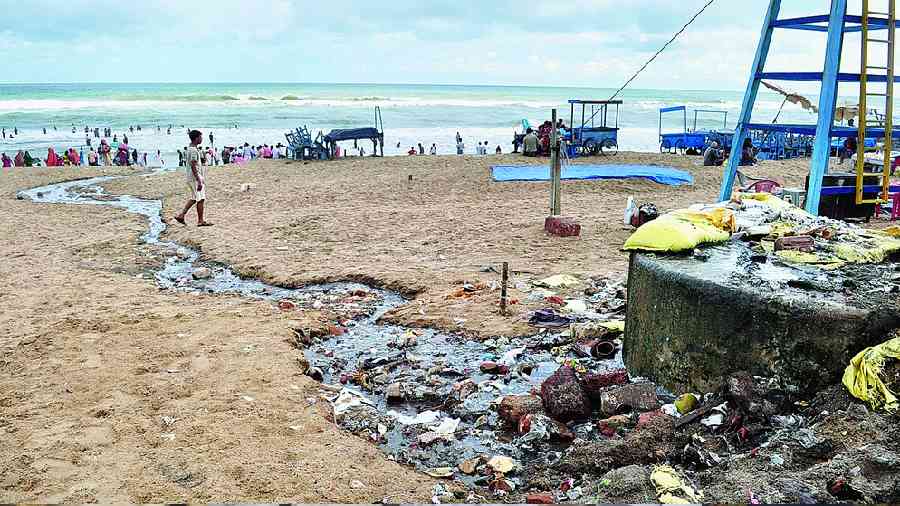 It has also cited instances of marine pollution — from a poorly functioning sewage treatment plant in Digha that is releasing polluted water into the sea and from the Veraval fishing harbour in Gujarat that is discharging untreated effluents into the sea.
File picture
G.S. Mudur   |   New Delhi   |   Published 10.08.22, 01:10 AM

An audit has identified dozens of public and private projects that have breached India’s coastal regulations — beach resorts, ports, roads, a racetrack, and even a jail near an Olive Ridley turtle nesting site.

The exercise by the Comptroller and Auditor General (CAG) has flagged deficiencies in the Union environment ministry’s project approval mechanisms and lapses by state coastal regulatory authorities that threaten efforts to conserve coastal ecosystems.

It has also cited instances of marine pollution — from a poorly functioning sewage treatment plant in Digha that is releasing polluted water into the sea and from the Veraval fishing harbour in Gujarat that is discharging untreated effluents into the sea.

Examples of projects that have violated Coastal Regulation Zone (CRZ) rules include a jail complex near Bangar in Odisha, within the Balukhand-Konark Wildlife Sanctuary that has an Olive Ridley turtle nesting site on the beach, resorts in Kanchipuram (Tamil Nadu), the Vembanad lake region (Kerala), an illegal road in Udupi (Karnataka), and a racetrack in Pattipulam (Tamil Nadu), the CAG said.

A 35km coastal road from Princess Flyover to Worli in Mumbai, approved by the environment ministry in 2017, and a Mumbai transharbour sea-link approved in 2015 are among projects that have used outdated baseline data during the environmental impact assessment (EIA).

The CAG’s audit report on conservation of coastal ecosystems released on Monday said 14 out of 43 sampled projects had received the environment ministry’s approval without a full analysis of the mandatory EIA.

In the 14 projects, the EIA studies had failed to identify key biodiversity in the project areas and did not include mitigation measures to alleviate the risks faced by the biodiversity there.

The CAG officials audited 28 CRZ clearances by the environment ministry between 2015 and 2019, 118 project clearances by state bodies, and 128 CRZ violations reported to states.

In three cases, the audit observed that the environment ministry did not independently verify information provided by project proponents. One of these was the expansion of the Adani Petronet (Dahej) port in Gujarat that involved reclamation of 23 hectares of intertidal mudflats.

The CAG report said the mudflats were areas with high biological productivity and abundance of invertebrates that provide food for migratory birds. They also serve as breeding grounds for many fish species.

“However, the EIA study of the project stated that the mudflats in the project area were biologically inactive,” the CAG said. “Audit observed that the environment ministry accepted the opinion of the project proponent and did not independently examine this issue and accorded clearance in 2016.”

The audit also observed that the environment ministry approved 12 projects in which the EIA used baseline data outdated by two to 11 years, breaching the ministry’s own instructions that data should not be older than three years.

The ministry also approved 16 projects in which the EIA did not address disaster management plans, a key prerequisite that project proponents need to submit while seeking approval. Among projects approved without disaster management plans are a mini bulk carriers handling facility at the Calcutta Port Trust, an edible oil transit terminal in Tamil Nadu and four berths at a port in Mangalore.

The audit found 21 approved projects where non-accredited consultants had prepared EIAs even though the ministry had stipulated in 2010 that projects would be considered for approval only if the consultants are accredited with a national accreditation board.

The CRZ rules prohibit certain activities within specified distances from the coastline and are intended to conserve the marine ecosystem along the country’s 7,516km coastline that is home to about 13 per cent of India’s population.

By 2050 the sea may have more plastic than fish