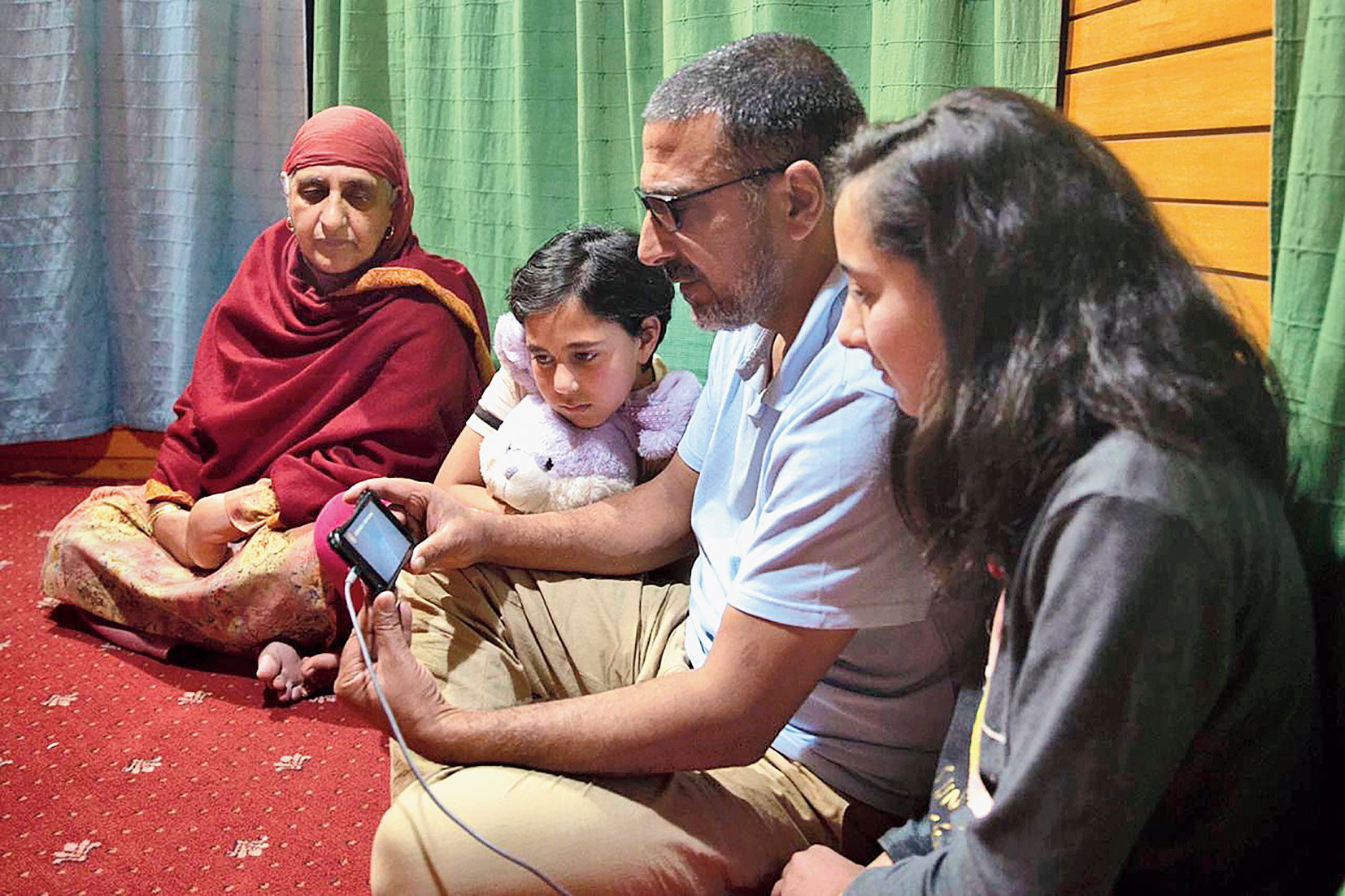 Associated Press photographer Dar Yasin (second from right), along with his family at their home in Srinagar, watches the Pulitzer Prize announcement. Yasin’s wife took this photograph, for which AP has given her credit.
(AP Photo/Rifat Yasin)
Muzaffar Raina And Our Delhi Bureau   |   Srinagar   |   Published 05.05.20, 10:46 PM

The longest communication blockade in modern history forgot about an attention-grabber from the past century: the Pulitzer Prize, which honours excellence in journalism and the arts.

The 2020 Pulitzer Prize for Feature Photography has been awarded to three Associated Press photojournalists for their work in Jammu and Kashmir. Some of the arresting pictures capture last year’s clampdown imposed for the revocation of special status and statehood.

Mukhtar Khan and Dar Yasin from Kashmir and Channi Anand from Jammu are the winners. This is the first time any journalist in Jammu and Kashmir has won the prestigious award administered by Columbia University.

If one of the objectives behind the Narendra Modi government’s jackboot tactics, including yanking off Internet and phone connections for long, was to prevent the country and the world from knowing what was happening in the Valley then, the stark images have now found a permanent place in journalism’s hall of fame.

Under the title “Winning Work”, the Pulitzer website has uploaded 20 photographs for which the three photojournalists have been chosen for the prize.

From Prime Minister Modi and down the line, official stony silence greeted the uncommon accomplishment by three Indians.

The BJP seized on the word “independence” in the Pulitzer announcement to say that anyone applauding the feat is “anti-national” and promptly conferred that label on Rahul Gandhi, one of the few leaders outside Kashmir who congratulated the three winners.

The Pulitzer announcement said the prize was “for striking images of life in the contested territory of Kashmir as India revoked its independence, executed through a communications blackout”.

On August 5, the Centre had initiated steps to cancel Jammu and Kashmir’s special status and enforced the clampdown.

Mukhtar, who took the gut-wrenching picture of a child with an eye injury, said the award had left him speechless. “I am excited. It is an honour for me and moreover an honour for Kashmir. I have no words to express my joy,” he said.

This photograph taken by Mukhtar Khan was among the 20 — 19 from Kashmir and one from Jammu, taken by three Associated Press photographers — which were chosen by the jury for the 2020 Pulitzer Prize for Feature Photography. The picture above shows six-year-old Muneefa Nazir, a Kashmiri girl, whose right eye was hit by a marble ball shot allegedly by paramilitary soldiers on August 12. When this picture was taken on September 17, 2019, the girl was standing outside her home in Srinagar. This photograph was published by The Telegraph also on its front page on September 27, last year.
(AP Photo/Mukhtar Khan)

A resident of Srinagar old city’s Fateh Kadal locality, Mukhtar is also a recipient of the Commonwealth Photography award and the Atlanta Photojournalism award. He has two children.

For Yasin, the occasion also meant that his wife would get personal credit for a photograph she took: that of her husband and the rest of the family watching the Pulitzer announcement on the phone.

A friend of Yasin said the photojournalist had been told to watch the prize announcement live on Monday night and while he was doing so, his wife captured his picture. This photograph has been used by the Associated Press, along with the picture credit “AP Photo/Rifat Yasin”.

“Yasin laughed and told us that it was his wife’s first byline (the name of the journalist behind an article or photograph),” the friend said.

Yasin tweeted: “Thank you colleagues, friends, brothers. I would just like to say thank you for standing by us always. It’s an honour and a privilege beyond (anyone) could have ever imagined. It’s overwhelming to receive this honour.”

Yasin has won several international and national photography awards and was part of the team that bagged the Hal Boyle award from the Overseas Press Club for filming the Rohingya exodus. He had also been honoured with the Robert F. Kennedy award in the print international category.

Channi, the third recipient of the award, wrote in a WhatsApp group of journalists: “Thank you so much everyone for the congratulations and appreciation. It’s been a long journey and KUDOS to those who stood by my side.”

Like other journalists, the three had faced immense difficulty in moving around during the clampdown, negotiating razor-wire road blockades and concealing their cameras lest they be hounded by ubiquitous security forces and also locals angry with the reportage by large sections of the national media.

The problems did not end there; the next challenge was to transmit the pictures to office in the absence of Internet and mobile phone connectivity, both of which remained suspended for months.

“Snaking around roadblocks, sometimes taking cover in strangers’ homes and hiding cameras in vegetable bags, the three photographers captured images of protests, police and paramilitary action and daily life — and then headed to an airport to persuade travellers to carry the photo files out with them and get them to the AP’s office in New Delhi,” an AP report said.

Journalists in both Kashmir and Jammu joined in the trio’s celebrations, with people from all walks of life applauding them.

“It’s been a difficult year for journalists in Kashmir & that’s saying something considering the last 30 years haven’t exactly been easy. Congratulations to @daryasin, @muukhtark_khan & @channiap on this prestigious award. More power to your cameras,” tweeted National Conference leader and former chief minister Omar Abdullah, who was last month released from jail.

Rights activist Khurram Parvez said it was an acknowledgement that the Kashmir story was being heard outside.

“It is not an acknowledgment of the work of journalists alone, although they worked hard for it. The victims are also feeling acknowledged,” he said.

The pictures of the months-long clampdown that earned the three photojournalists the honour were clicked during perhaps the most difficult time in Kashmir in a generation.

“All five of these photographers (including two other finalists) made remarkable, stunning images despite dangerous and challenging conditions, sometimes at great personal risk,” said AP director of photography and jury member David Ake.

Journalists in the Valley have braved arrest, assault, intimidation and FIRs, which continue to this day. Two Kashmir journalists, Gowhar Geelani and Masrat Zahra, were recently booked under the anti-terror law (UAPA).