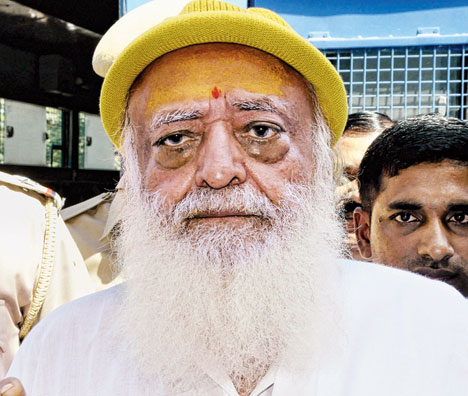 Jodhpur: Self-styled godman Asaram was on Wednesday sentenced to imprisonment till death by a court here for raping a minor who had come to one of his ashrams for studies in 2013.

The special SC/ST court in Jodhpur sentenced to 20 years in jail two of 77-year-old Asaram's accomplices - Sharad and Shilpi. Two other aides, Shiva and Prakash, were acquitted.

"We argued that Asaram is not a saint but a sinner. He called the victim from the hostel under a conspiracy and raped her. Accordingly, we demanded the maximum punishment for him. Sharad and Shilpi too were part of the conspiracy," public prosecutor Pokar Ram Bishnoi told reporters here.

Asaram had been arrested on a complaint of sexual exploitation by the 16-year-old girl from Shahjahanpur in Uttar Pradesh who had joined his ashram at Chhindwara in Madhya Pradesh for her studies. The victim had alleged in her complaint that Asaram had called her to his ashram in Manai near Jodhpur and raped her on the night of August 15, 2013.

Additional sessions judge Madhusudan Sharma sentenced the trio after convicting them of various offences under the Indian Penal Code and the Protection of Children from Sexual Offences Act in a proceeding held in a specially convened court on the Jodhpur central jail premises.

"Asaram was given a life-long jail term, while his accomplices Sharad and Shilpi were sentenced to 20 years in jail by the court," Bishnoi told reporters here.

Asaram, who started from a hut on the banks of the Sabarmati and created a Rs 10,000-crore empire with 400 ashrams in India and other parts of the world in four decades, will be in prison till his natural death, said the lawyer, adding the court also fined the self-styled godman Rs 1 lakh.

"We had complete faith in the judiciary and are happy that we got justice," the 16-year-old victim's father told journalists after the verdict. PTI