Demonstrators blocked highways at several places in Buxar, Bhagalpur and Samastipur and burnt tyres as a mark of riot, say officials 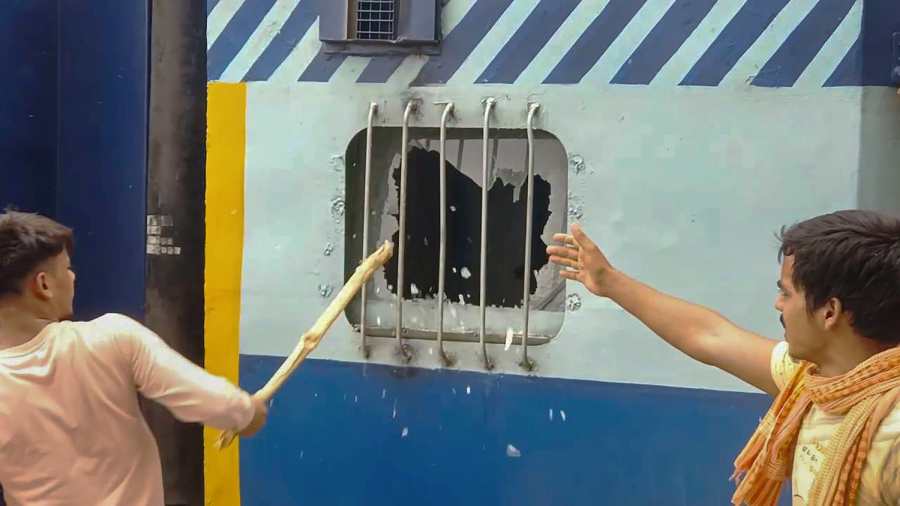 Youngsters vandalise a train in protest against the Agnipath scheme, at Bhabua Station in Kaimur district of Bihar
PTI picture
Our Bureau, PTI   |   Bihar   |   Published 17.06.22, 12:40 PM

Protests against the Center's 'Agnipath' recruitment scheme intensified in Bihar on Friday as angry aspirants set fire to at least 20 bogies of the New Delhi-Bhagalpur Vikramshila Express and New Delhi-Darbhanga Bihar Sampark Kranti Express at Lakhisarai and Samastipur stations and blocked highways in the state.

The demonstrators blocked highways at several places in Buxar, Bhagalpur and Samastipur and burnt tyres as a mark of protest, officials said.

The protests, which are into its third day in the state, caused massive disruption of railway services at Buxar and Kahalgaon, officials of East Central Railways said.

Jamalpur superintendent of railway, Umer Javed said the protestors set on fire 12 bogies of Vikramshila Express. However, there was no casualty.

An ECR official said around 20 trains were cancelled due to the arson, while many others were either short-terminated or run on alternate routes.

At Lakhisarai station a large number of protestors lay down on the railway tracks to block the movement of trains. They were dispersed by Railway police with the help of the local police.

Bihar had witnessed large scale protest on Thursday too against the central scheme, under which hiring in the Armed Forces has been for a four-year period followed by compulsory retirement for at least 75 per cent of the personnel, without any pension benefits. Hordes of aspirants had hit the streets, vandalised buildings and vehicles, stormed railway stations and set fire to train coaches demanding immediate roll back of 'Agnipath'.

With protests against 'Agnipath' reported from various parts of the country, the Centre on Thursday granted a one-time waiver in the upper age limit for recruitment under the scheme by extending it to 23 years from 21 years for 2022.