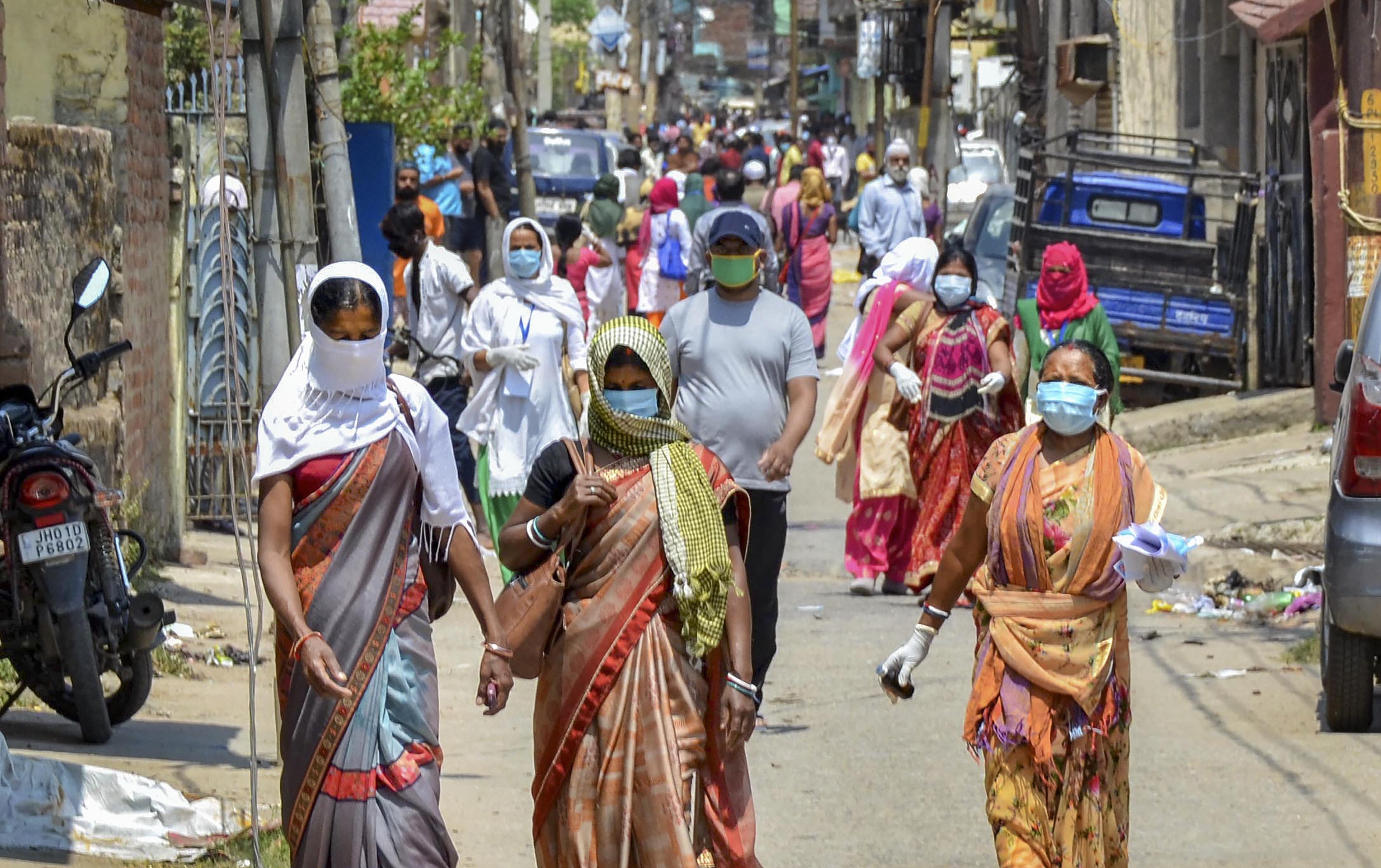 Agarwal said around 30 lakh people have downloaded the government's AarogyaSetu mobile app which helps people assess the risk of them getting infected with the coronavirus and alert authorities if they have come in close contact with an infected person.

On the government taking a decision to conduct rapid antibody tests for Covid-19 in hotspots of the country or areas which have reported a larger number of coronavirus cases, an Indian Council of Medical Research (ICMR) official said the guidelines are likely to be issued on Saturday.

Discussions regarding the implementation of the same were held at an emergency meeting of the National Task Force held on Thursday, he said.

As many as 647 Covid-19 positive cases found in 14 states in the last two days are linked to the Tablighi Jamaat congregation, the Union health ministry said on Friday.

Joint secretary in the ministry Lav Agarwal also said in a daily media briefing that out of the 12 deaths reported in the last 24 hours some are related to the congregation, which took place early last month in the national capital’s West Nizamuddin area.

So far there have been 2,301 cases of Covid-19 in India and 56 deaths out of which 12 were reported since Thursday, he said, adding that there has been a rise of 336 coronavirus cases since Thursday.

The joint secretary said that “647 positive cases of the coronavirus have been found in the last two days that are linked to the Tablighi Jamaat congregation, and these were reported from 14 states (and Union territories) Andaman and Nicobar, Delhi, Assam, Himachal Pradesh, Haryana, Jammu and Kashmir, Jharkhand, Karnataka, Maharashtra, Rajasthan, Tamil Nadu, Telangana Uttarakhand and Uttar Pradesh”.

“If we see the rise in cases in the last few days, it has primarily been due to an increase at a particular level,” Agarwal said in an apparent reference to the Tablighi Jamaat congregation. He said because of the “lockdown and our efforts to promote social distancing, cases were being reported but there was no sharp rise”.

People needed to understand that coronavirus was an infectious disease and all efforts towards containment of the spread of the disease may go to waste because of even one failure, Agarwal said.

The app will detect only fresh cases and will send out alerts to only those who have been near the infected person. He urged people to download the app for their safety. The joint secretary also said health minister Harsh Vardhan had expressed concerns over misbehavior with doctors and medical staff, and has appealed to patients and their families not to create obstacles for them while discharging their duties.

He said that on Thursday, the health ministry issued an advisory for online training of health professions focusing on areas like field surveillance, contact tracing, hospital infection prevention and control, use of personal protective equipment, clinical case management, including ventilator management, training on managing quarantine and isolation facilities and community based training in pyscho social care.

Medics examine patients for COVID 19 during a nationwide lockdown in the wake of the disease, in Hyderabad, Wednesday, April 1, 2020.
PTI

“Yesterday, we had a meeting to discuss and finalise the guidelines for using the rapid antibody tests and we hope by tomorrow, we will issue the guidelines. The primary purpose of the guidelines will be on how to deploy these tests in high-risk areas, hotspot areas and non-hotspot areas,” the official said.

The ICMR in its interim advisory issued on Thursday had recommended the use of rapid antibody test in Covid-19 in hotspots.

As far as Covid-19 tests are concerned, the official said there were 182 labs in the country for diagnosis, out of which 130 were government labs. The official said about 8,000 samples were tested on Thursday for Covid-19, the highest number of samples tested in a day till now.