36 arrested for Kanpur clashes over BJP leader's remarks on Prophet

Rise above politics and religion and act against culprits, Mayawati tells Yogi government 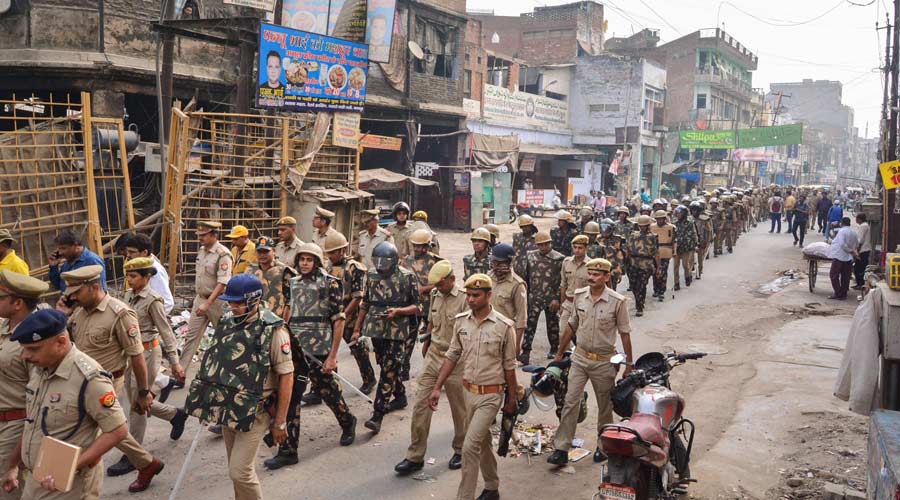 Police conduct flag march in a locality, a day after clashes broke out between two groups over market shutdown, in Kanpur on Saturday.
PTI Photo
Our Bureau, Agencies   |   Kanpur, Lucknow   |   Published 04.06.22, 12:05 PM

As many as 36 people have been arrested after Friday's violence over an alleged insult to Prophet Mohammed by a BJP spokesperson during a television show.

Kanpur police commissioner Vijay Singh Meena said at least two persons had been injured in the violent episode. "The accused and the conspirators will be booked under Gangster Act and their properties will be seized or demolished," warned another senior police officer, reported PTI.

Mobs hurled bombs and pelted stones at each other as violence erupted in Kanpur after groups of people tried to force shopkeepers to down shutters. Clashes broke out in Pared, Nai Sadak and Yateemkhana areas of the city after Friday namaz, police said.

The two sides hurled bombs and opened fire as members of one of the groups attempted to shut shops over the alleged remarks made by BJP spokesperson Nupur Sharma during a television debate recently, the senior police official said. Those who allegedly forced traders to shut shops clashed with police personnel who then used batons to disperse the mob.

Those involved in the violence had been identified with help of video footage. As of Friday night, 18 people had been arrested, according to  Additional Director General (Law and Order) Prashant Kumar. By Saturday afternoon, the number of those arrested had doubled, ndtv.com reported.

Some local leaders, including Maulana Mohammed Ali (MMA) Jauhar Fans Association chief Hayat Zafar Hashmi, had called for closure of shops on Friday in protest against the remarks. They had also taken out a procession during which they confronted members of other communities, an official said. The clashes broke out soon after.

Kanpur's District Magistrate Neha Sharma told PTI, "Members of a community took to the streets in protest and indulged in violence. Several people were seriously injured and have been sent for medical assistance. Heavy police force has been deployed in the affected areas. The police have also sought additional reinforcement," she said.

Kanpur police commissioner Vijay Singh Meena, who reached the spot, told reporters, "Suddenly, around 50-100 people came and started raising slogans, which was opposed by the other side. Then there was stone pelting. The police force controlled the situation to a great extent."

The district magistrate said strict instructions have been issued to maintain a close vigil on the situation.

Twelve companies of Provincial Armed Constabulary (PAC) have been deployed in the area to maintain law and order, police said. Senior officials are also being sent there to monitor the situation.

Bahujan Samaj Party supremo Mayawati attacked the state government on Saturday over the violence and stone-pelting in Kanpur. She asked the BJP dispensation to take action against the culprits "by rising above religion, caste and party politics".

In a tweet Saturday, Mayawati said, "Riots and violence that erupted in Kanpur during the visit of the president and the prime minister to Uttar Pradesh is very sad, unfortunate and worrying and also a sign of the failure of the police intelligence. The government has to understand that in the absence of law and order, how investment and development are possible in the state?"

She said the government should take strict legal action against the culprits "by rising above religion, caste and party politics and conduct an independent and impartial high-level inquiry".

Reacting to the incident, Samajwadi Party chief Akhilesh Yadav said in a tweet in Hindi, "Owing to the failure of the police and the intelligence machinery, at a time when the president, prime minister and chief minister were in the city, the provocative statement given by BJP spokesperson Nupur Sharma caused unrest. The BJP leader should be arrested. We appeal to all to maintain peace."

Mayawati hits out at Yogi govt over Kanpur violence