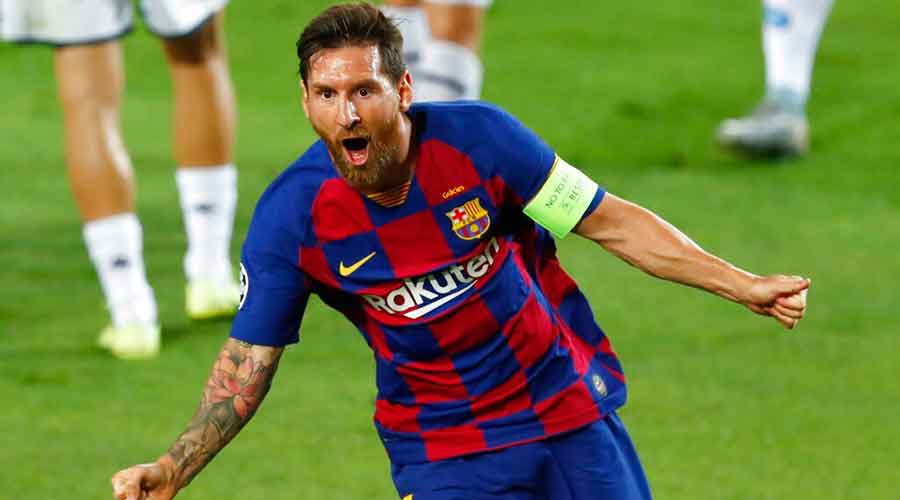 Lionel Messi celebrates after scoring his side's second goal during the Champions League round of 16 match between Barcelona and Napoli on Saturday
AP
Agencies   |   Barcelona   |   Published 10.08.20, 01:47 AM

FC Barcelona insist they have as much chance as Bayern Munich of winning their Champions League quarter final despite a far from convincing 3-1 win over Napoli on Saturday.

First-half goals from Clement Lenglet, Lionel Messi and Luis Suarez sent Barca on their way into the ‘Final Eight’ tournament in Lisbon where they will face the German champions, who crushed Chelsea 4-1 for a 7-1 aggregate win in their last 16 second leg.

Robert Lewandowski struck twice and set up one goal each for Ivan Perisic and Corentin Tolisso as Bayern remained on course for a treble of titles. Bayern, who won the domestic league and Cup double and have won all eight of their Champions League games.

Barca’s 4-2 aggregate win over Napoli may have looked resounding on the scoresheet but was anything but, as Gennaro Gattuso’s Italian side dominated the second half after Lorenzo Insigne scored at the end of the first.

Barca coach Quique Setien said his side should not be underestimated against Bayern.

“It will be tough for us because they’ve had an excellent season and dominated their tie. It will be difficult for us but also for them,” Setien told a news conference.

Barca striker Luis Suarez added: “In a one-off game anyone has a chance, so it’s perfectly balanced, 50/50.”

Brazilian midfielder Willian has confirmed he will leave Chelsea after seven ‘wonderful’ years at Stamford Bridge. The 32-year-old, linked with a move across town to Arsenal, posted a farewell letter to the club’s fans on Twitter.