The two Golden Globe winners, now in their mid-70s, ruled Hollywood with their machismo over the last four decades 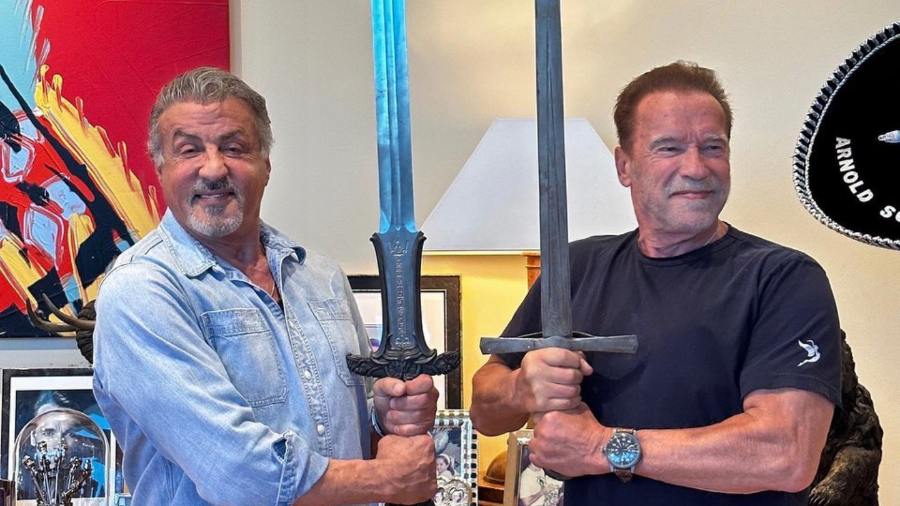 The bromance brewing between Sylvester Stallone and Arnold Schwarzenegger — two of the biggest action stars of all time who were seen as each other’s strongest competition back in the ’80s — has sent the internet into a tizzy.

The two Golden Globe winners, now in their mid-70s, ruled Hollywood as action heroes over the last four decades. Rumours around an alleged rivalry between the two drew attention worldwide in the 1980s and ’90s as smash-hits from the Rocky and The Terminator franchises released in theatres. Cut to 2022, it is their friendship that is winning hearts on the internet.

The Terminator actor posted an image on Instagram where Stallone is holding the famous sword he wielded in the Conan films while he’s holding Stallone’s famed Rambo knife.

A few weeks ago, Stallone shared an image of the two with cowboy hats and cigars. He congratulated Schwarzenegger for his incredibly successful charity event, The After School Allstars, held for the benefit of children.

Stallone is currently awaiting the release of his first web series Tulsa King, set to arrive on Paramount+ on November 13. In Tulsa King, Stallone plays Dwight Manfredi, a New York mafia who is exiled to Tulsa, Oklahoma, after a 25-year imprisonment. The 76-year-old was recently seen in Prime Video’s superhero film Samaritan.

Schwarzenegger, on the other hand, is gearing up to play The President in the upcoming martial arts comedy film Kung Fury 2, directed by David Sandberg. The 75-year-old actor recently voice-starred in the animated sitcom Little Demon.