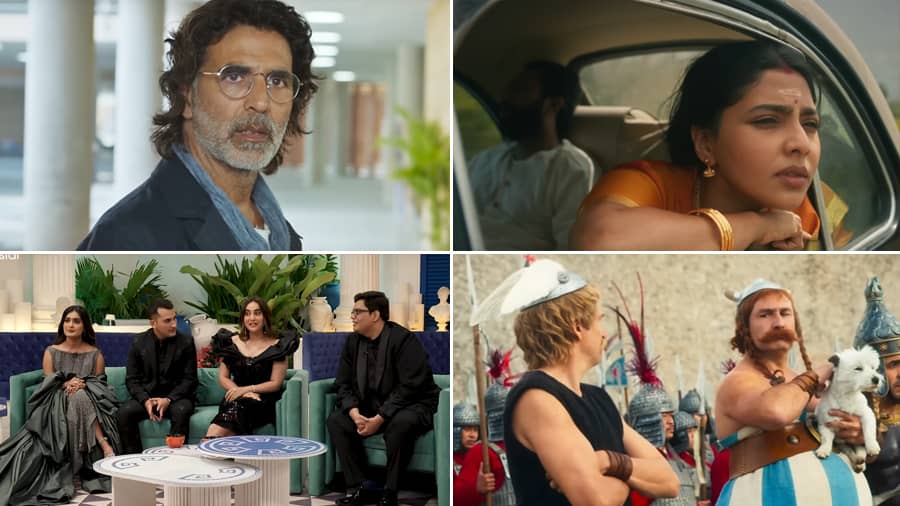 The teaser of Akshay Kumar’s film Ram Setu has been released by the makers. Directed by Abhishek Sharma, the film also features Nassar, Nushratt Bharuccha, Jacqueline Fernandez and Satyadev Kancharana.

The 56-second teaser showcases Kumar as an archaeologist who is on a mission to discover and save the Ram Setu. He sports a special suit and dives underwater to have a look at the Ram Setu.

Ram Setu will arrive in cinemas on October 25.

The trailer begins with Prithviraj reading a book of Kumari and a place named Kaanhiraghat where “people go to any extent to protect their traditions and power”. The film also stars Giju John, Surabhi Lakshmi, Swastika and Shivajith Nambiar in pivotal roles.

Director, actor and producer Karan Johar’s celebrity chat show Koffee With Karan Season 13 comes to a close this week. Disney+ Hotstar shared a teaser of the finale in which the host is answering questions thrown at him by the guests.

The guests of the 13th episode are social media and YouTube A-listers Tanmay Bhat, Kusha Kapila, Niharika NM and Danish Sait. The one-minute teaser shows Karan asking his guests if he really talks about Alia too much on the show.

Koffee with Karan Season 7 Episode 13 will arrive on Disney+ Hotstar on September 29.

Asterix and Obelix : The Middle Kingdom

The official teaser of Guillaume Canet-directed Asterix and Obelix: The Middle Kingdom has come out. Apart from reviving the beloved comic book franchise, the film will also serve as the feature film debut of Swedish football star Zlatan Ibrahimovic.

The teaser follows the beloved Gaulish warriors as they try to defend their village from the Roman army. Guillaume Canet stars as Asterix alongside Gilles Lellouche’s Obelix. The film also features Vincent Cassel as Caesar, Jonathan Cohen as Graindemais and Marion Cotillard as Cleopatre. Ibrahimovic plays a Roman army general and shows off his superb footballing and martial art skills.