Advertisement
Home / Entertainment / Kartik Aaryan is ‘brilliant choice’ for Hera Pheri 3 but he is not replacing Akshay: Suniel Shetty

Kartik Aaryan is ‘brilliant choice’ for Hera Pheri 3 but he is not replacing Akshay: Suniel Shetty

Backed by Firoz Nadiadwala, Hera Pheri 3 will be helmed by Anees Bazmee, according to reports 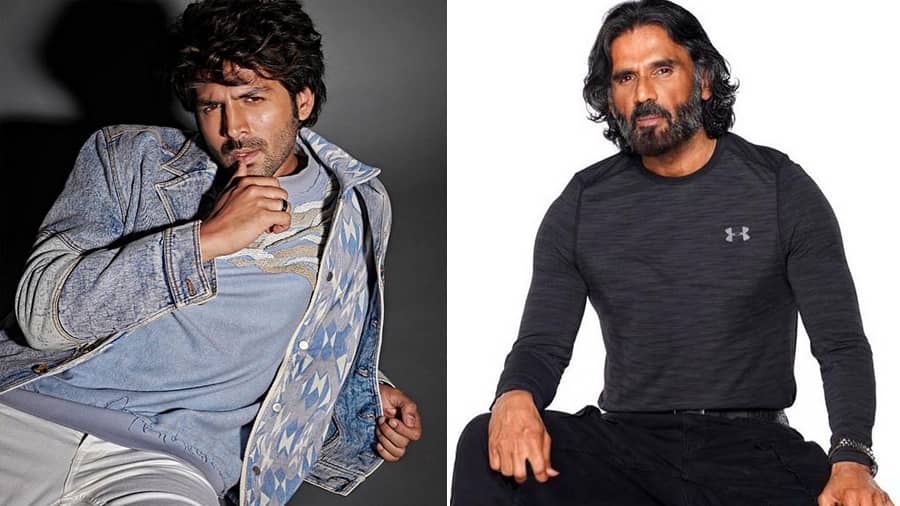 Bollywood star Suniel Shetty on Thursday said he is thrilled about Kartik Aaryan joining the Hera Pheri franchise and clarified that the actor has not replaced his co-star Akshay Kumar in the upcoming third part.

Last week at an event in Delhi, Akshay had confirmed his exit from Hera Pheri 3 citing creative differences. Prior to that, Rawal had said the upcoming movie will soon go on the floors with Aaryan taking over the role of Raju.

Amid Aaryan's entry in the third installment of the movie, Suneil said no one can replace Akshay as the streetsmart Raju.

"Kartik Aaryan is a brilliant choice, (but) he is not playing Raju. Kartik is an absolutely new character and he will bring amazing energy to the role that he would play,” said Shetty.

"Nobody can replace Raju. Now, it is for Raju and Firoz (producer Nadiadwala) bhai to sort out Hera Pheri (the issue)," he told PTI.

The first film, which was released in 2000, was directed by Priyadarshan. Its sequel Phir Hera Pheri (2006) saw the same cast reprising their iconic characters. Late actor-filmmaker Neeraj Vora had helmed the second part.

The third part has been in the works for quite some time. Backed by Firoz Nadiadwala, Hera Pheri 3 will be helmed by Anees Bazmee, according to reports.

According to Shetty, a hit film is defined by the popularity of its central characters, which, he said, happened in the case of Hera Pheri.

“I feel a hit film is something whose characters are remembered, like Raju, Shyam, Babu bhaiya. The simplicity of Hera Pheri has worked with the audience.

"I didn't know that the film would become a cult (classic) like this. But I knew it would be appreciated," the 61-year-old actor, who played the geeky Shyam in Hera Pheri, further said.

For Shetty, Rawal's bumbling, irritable landlord is the "soul" of the franchise.

"Babu bhaiya is the soul of the film and he controls the two action heroes Raju and Shyam. I think the audience loved this. We didn't do acting in the film, we were just ourselves and that's why Hera Pheri has always worked," he said.

“Clean comedies will always work like magic and will be loved by toddlers to older people. You would not feel like you want to fast forward and watch it,” he added.

Shetty is awaiting the release of his debut web series Dharavi Bank, which will arrive on MX Player on November 19. It is directed by Samit Kakkad.