The venue is being blocked by curtains to ensure zero leaked visuals from shaadi, both the actors are all set to tie knot on April 15 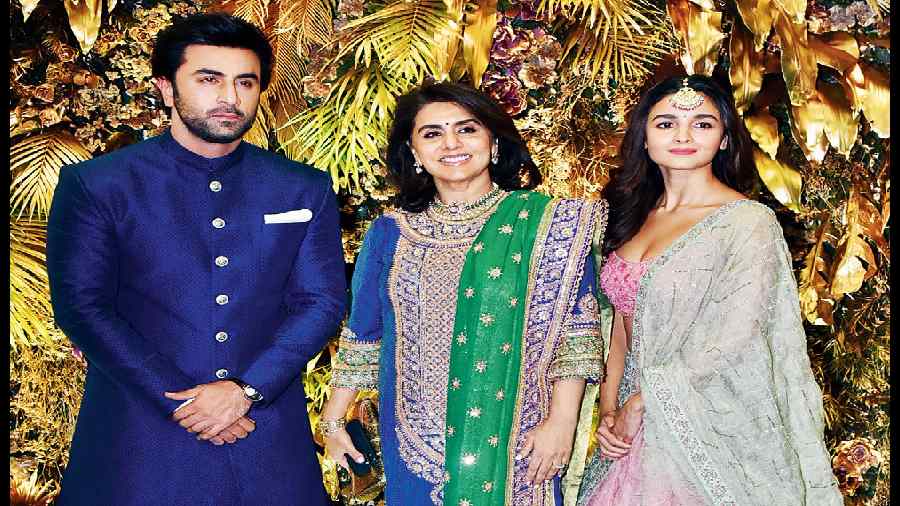 The virtual buzz around Ranbir Kapoor and Alia Bhatt's weekend wedding has taken a physical form clearly evident from the view outside the Bollywood star couple's residence, where the paparazzi are camped to capture the minutest of developments, with the families and the management teams of the couple keeping mum about the nuptials.

Street in front of Vastu to be decked with lights ahead of Alia Bhatt-Ranbir Kapoor wedding.
Twitter/@ilahi08

Ranbir Kapoor (39) and Alia Bhatt are reportedly set to tie the knot this week in the presence of their family and close friends. There has been, however, no official confirmation on the wedding date so far from both the families. The couple's rumoured wedding ceremonies will kick off today, April 13, and continue until April 17.

Rumour mill has been churning with speculation, from the dates -- to the wedding location, which keeps changing from the Kapoor family's iconic Chembur bungalow to the couple's Vastu building apartment in Pali Hill -- a posh neighbourhood in Bandra here.

While Ranbir Kapoor owns a house in the Vastu Building, Alia Bhatt reportedly lives on rent in the same building, but on a different floor.

White curtains are being put up in Vastu to ensure there are no leaked visuals from the wedding.
Twitter

As shutterbugs continued to wait to catch glimpses of the preparations from inside the apartment, the security team tied a huge white curtain between the building's fencing and a tree, covering an important view from where the paparazzi could access the flat's entrance.

There were moments of jubilation when the battery of paparazzi spotted designer clothes by celebrity designer Sabyasachi Mukherjee, which most dubbed as the "wedding clothes of the bride and groom", being taken into the apartment complex in a cab.

The speculation game regarding the wedding was serving as an amusement to the actors' security staff, including Yusuf Ibrahim, the security in-charge of Alia Bhatt (29).

Ibrahim's 911 Protection team is reportedly tasked with supervising the entire security of the wedding.

Even as the media struggled to get any official word from the families, Ranbir Kapoor's actor-mother Neetu Kapoor and Alia Bhatt's filmmaker-father Mahesh Bhatt were spotted shooting for their respective commitments in the city.

Both Neetu Kapoor and Mahesh Bhatt, however, didn't divulge any details regarding the wedding.

Recently, the iconic RK Studios (established by Ranbir Kapoor's filmmaker-grandfather Raj Kapoor which was acquired by the realty firm Godrej Properties in 2018) was lit up, leading many to assume that it marked the official beginning of the wedding preparations.

Ranbir Kapoor confirmed his relationship with Alia Bhatt in an interview in 2020, where he referred to her as his "girlfriend" and said that if it weren't for the pandemic, they would have been married. Fans of Alia Bhatt and Ranbir Kapoor will get to see them share screen space in Ayan Mukerji's Brahmastra, which releases in September.

Director Ayan Mukerji recently shares a beautiful glimpse of Ranbir Kapoor and Alia Bhatt from the breathtaking Kesariya song shot in Varanasi on the eve of their upcoming wedding celebrations!

Other than Brahmastra, Ranbir Kapoor has Shamshera, co-starring Vaani Kapoor and Sanjay Dutt, lined-up. He will also be seen in an untitled film with Shraddha Kapoor. The actor will also star in Sandeep Reddy Vanga's Animal, with Anil Kapoor and Rashmika Mandanna.