It is Martin Scorsese’s least sentimental picture of mob life, and for that reason his most poignant 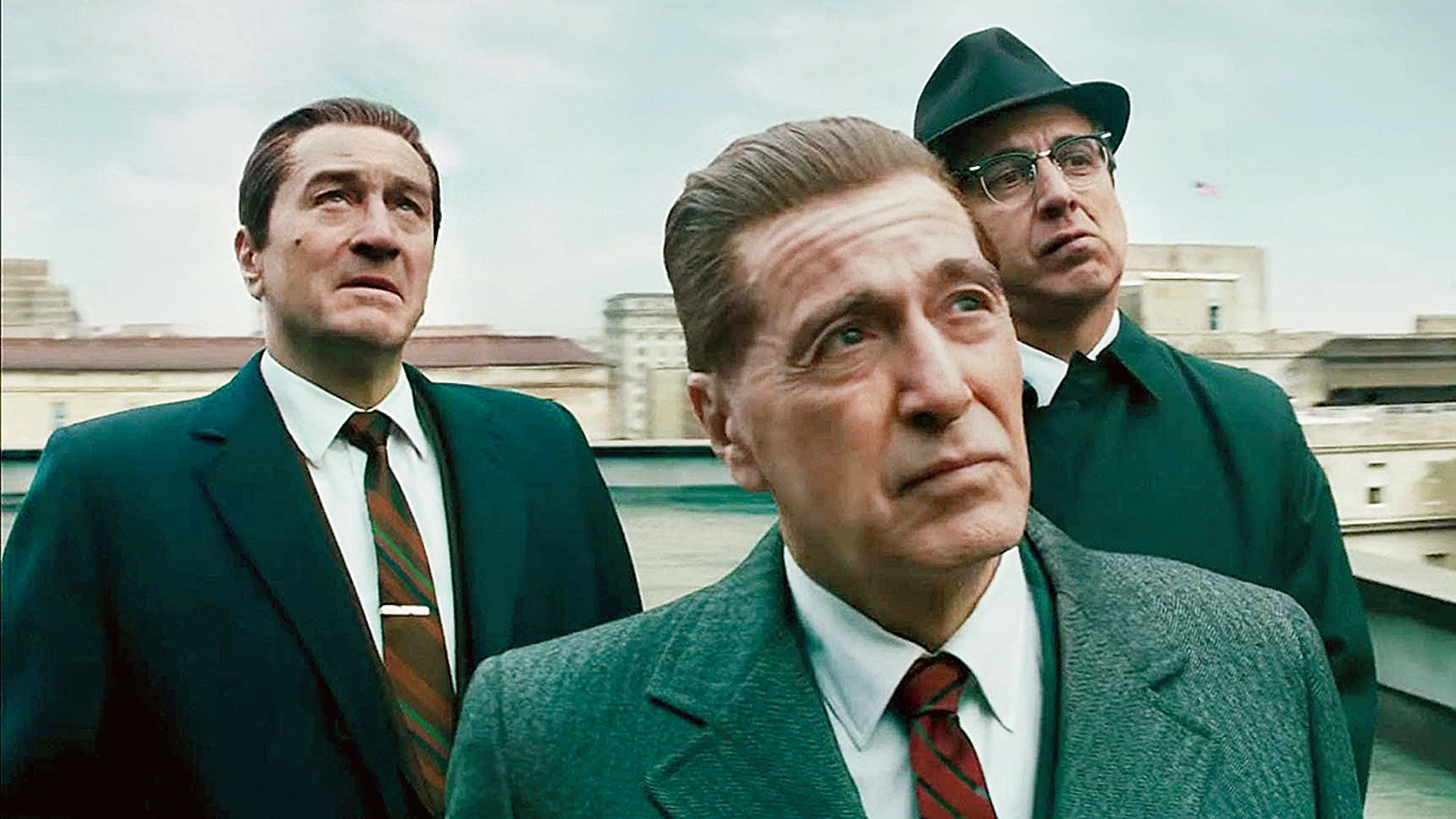 This isn’t the last film Scorsese will make, or the last film anyone will make about the Mafia in its heyday, but it does arrive at a kind of resting place. Not an easy one, by any means, since what The Irishman looks back on is a legacy of violence and waste, of men too hard and mean to be mourned
(Still from the movie)
A.O. Scott/The New York Times News Service   |   Published 01.12.19, 09:44 PM

Oneof the all-time canonical moments in the work of Martin Scorsese — and, therefore, in all of American cinema — is the two-and-a-half-minute sequence in Goodfellas sometimes known as “the Copa shot.” In a single, unbroken take, the camera, gliding and swivelling to absorb every detail along the way, follows Henry Hill (played by Ray Liotta) and his sweetheart, Karen (Lorraine Bracco), from Henry’s car, through the kitchen and into the hurly-burly of the nightclub, accompanied by the sound of the Crystals singing Then He Kissed Me. For Henry, an up-and-coming mobster — and also for the viewer, hovering in the limbo between bystander and accomplice — the arrival at the Copa is a pure and potent dose of gangster glamour. Life is good.

The opening shot of The Irishman, Scorsese’s latest long-form crime story, evokes that earlier scene and turns it inside out. Once again, the camera floats down corridors and around corners accompanied by a radio hit from the past. This time it’s the tune In the Still of the Night by the Five Satins, and we’re in a nursing home. We make our way past doctors and orderlies, our attention finally coming to rest in a quiet, nearly empty room furnished with institutional tables and chairs. An old man is waiting for us. Like Henry Hill, he’s going to tell the tale of his unsavoury associates and criminal doings — a meandering reminiscence that will touch on some notorious historical episodes, many of them involving murder.

But the mood is different this time around, even if we recognise a few of the faces (more on those faces shortly). The anecdotes, some of which are funny, some horrifying, are edged with a bleak sense of absurdity and shadowed by the rapid onset of oblivion. Death is close at hand. The next three and a half hours will feel like a long, final breath in fading light. The light is managed by the cinematographer, Rodrigo Prieto. The passing of time is handled by the editor, Thelma Schoonmaker. The movie is long and dark: long like a novel by Dostoyevsky or Dreiser, dark like a painting by Rembrandt.

The man, whose name is Frank Sheeran — he’s the Irishman we’ve come to see, and he’s played by Robert De Niro — has some information to share about something everyone used to care about, a piece of information that at one time could have gotten him and a lot of other people killed. Actually a lot of people did get killed. One of them might have been James Riddle Hoffa, better known as Jimmy, the former president of the International Brotherhood of Teamsters.

Nowadays, Frank reckons, the name Jimmy Hoffa doesn’t mean much anymore. Back in the decades after World War II, though, when organised labour and organised crime were mighty forces in the land, the name stirred fear and admiration in the hearts of politicians, racketeers and ordinary working stiffs. “In the ’50s, he was like Elvis,” Frank says of the man who was his boss, friend and eventual quarry. “In the ’60s he was bigger than the Beatles.”

In 1975, Hoffa vanished, and speculation about what happened to him was for many years the stuff of wild conspiracy theories and stand-up-comedy routines. Jack Nicholson played him in a 1992 biopic, written by David Mamet and directed by Danny DeVito.

The Irishman, with a blustering, showboating, disarmingly tender Al Pacino in the Hoffa role, isn’t competing with that movie, or trying to correct the historical record. There was a real Frank Sheeran, who really did claim involvement in Hoffa’s demise, though not everyone believes him. Scorsese, working from Steve Zaillian’s adaptation of a book by Charles Brandt (called I Heard You Paint Houses), assembles a kind of gangland greatest hits. The pun is intended: this is a history of the United States in a few dozen killings. Some are obscure, like the whacking of a guy named Whispers (not to be confused with a different guy named Whispers) who stuck his beak in the wrong birdbath. Others still have a garish tabloid glow, like the shooting of “Crazy Joe” Gallo at Umberto’s Clam House in Manhattan. Add the assassination of John F. Kennedy to the list, along with Hoffa’s disappearance.

But public affairs and Cosa Nostra chronicles aren’t really what this movie is about. Don’t get me wrong: there is plenty of grisly, crazy mob lore, blood and tomato sauce, guys with colourful nicknames, episodes that wander away from the main plot. Every so often the screen will freeze and a note will appear supplying the date and manner of a minor character’s eventual death. These aren’t facts for the final exam, but part of a deeper, sadder lesson that has to do with the inevitability of loss. The loss of life, yes, but also the erosion of meaning that accompanies the fading of experience into memory and memory into nothing.

What interests Scorsese — what he has always cared most about — aren’t facts but feelings. Like many of his other films, The Irishman spends some time mapping the structures of power and the codes of behaviour that govern its particular slice of reality. Frank, making his living as a truck driver in Pennsylvania after serving in World War II, becomes a soldier in the Philadelphia mob, working mostly for a local capo named Russell Bufalino (Joe Pesci). Russell, whose cousin (Ray Romano) is a mob lawyer, connects Frank with Hoffa. Through flush times and lean, the Bay of Pigs and Watergate, the two bosses command Frank’s loyalty for the next 20 years or so.

The business of graft, extortion and influence peddling occupies all these men, but The Irishman finds its emotional centre in the vicissitudes of their friendship. This is Scorsese’s least sentimental picture of mob life, and for that reason his most poignant. Hoffa, for all his windy belligerence, is also petty to the point of neurosis. He can’t stand it when an upstart Teamster rival, Anthony Provenzano (Stephen Graham), shows up late for a meeting wearing shorts. Hoffa ruthlessly focuses on money and power, unless there’s the possibility of an ice cream sundae.

I don’t mean that Pacino and Scorsese make Hoffa lovable, but rather that they render him at human scale. Russell and Frank, big shots in their own right, are small men too. In addition to checking in periodically on Frank in his lonely senescence, the movie repeatedly jumps back to a fateful road trip he and Russell took with their wives (Stephanie Kurtzuba and Kathrine Narducci), a journey as intoxicated with the banality of midcentury, middle-class married life as a John Updike story.

And it’s in those quiet moments that the elegiac power of The Irishman really takes hold. The forward motion of time leads to only one destination, but movies can make it run backward too. Scorsese has digitally “de-aged” his principal actors, De Niro in particular, and while the effect takes some getting used to, it doesn’t take you out of the picture any more than makeup or prosthetics might. De Niro’s face looks a little blurry when Frank is supposed to be in his 40s and 50s, but what’s more striking is that the body it’s attached to seems to belong to the actor’s present-day, 76-year-old self.

There is something beautiful and fitting about that incongruity, and also about the presence of so many actors we’ve seen in other Scorsese films. Harvey Keitel shows up, as does Welker White, who was Henry Hill’s babysitter in Goodfellas and is Jo Hoffa, Jimmy’s wife, here. Pesci, who has been mostly absent from movies for the past 20 years, is the revelation. He’s lost the strut and the shtick that used to define (and sometimes undermine) his performances, and does everything with his sad, watchful eyes and his lovely, walnut-shell face. When he and De Niro are onscreen together, you believe in the power of art.

But The Irishman isn’t sentimental about that, either. It’s a gift for cinephiles, to be sure, but also a sombre acknowledgment of limitations. Alongside the story of Frank’s career runs another one, nearly invisible to him, about the price paid by the women in his life, in particular his daughter Peggy. Peggy (played as a child by Lucy Gallina and then by Anna Paquin), is fond of Hoffa and creeped out by Russell. Though she barely says a word, her silence delivers a damning verdict on her father and his world. It also represents a gesture on Scorsese’s part toward some of the stories he hasn’t chosen or known how to tell over the years. That’s another kind of loss.

To watch this movie, especially in its long, graceful final movement, is to feel a circle closing. This isn’t the last film Scorsese will make, or the last film anyone will make about the Mafia in its heyday, but it does arrive at a kind of resting place. Not an easy one, by any means, since what The Irishman looks back on is a legacy of violence and waste, of men too hard and mean to be mourned. A monument is a complicated thing. This one is big and solid — and also surprisingly, surpassingly delicate.