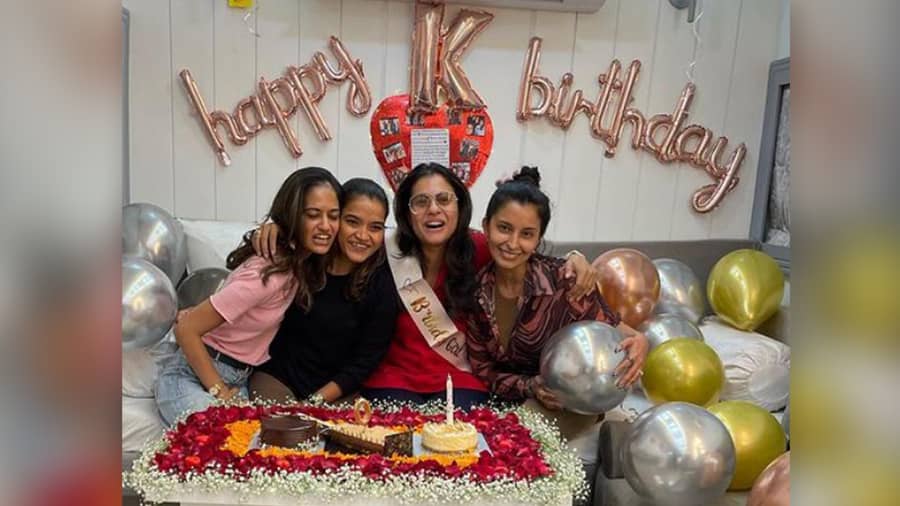 This week turned out to be a happening one for Kajol. July 31 marked 30 years of her film career since her debut film Bekhudi in 1992 and on August 5 the actress turned 48. Kajol’s ‘Team K’ celebrated her birthday with balloons and cake, and shared the moments on Instagram.

Around midnight, Ajay Devgn shared a video on social media that shows Kajol calling him up. When he swipes to answer, the video transforms into a stunning montage of Kajol dressed in a red gown. In the caption, he wrote, “When she calls, I never fail to pick up. Happy birthday dearest @kajol”

The doting husband’s birthday wish was a tad different from the adorable and funny birthday post that Kajol dedicated to Ajay on his birthday.

The couple, married for over 23 years, are known for their contrasting personalities. Their chalk-and-cheese combination has been a proof that opposites do attract. While Ajay is reserved and a man of few words, Kajol is known to be chatty and bubbly with an infectious charm. Here’s a look at the star couple’s love story, on and off the screen, over the years.

They have not made many films together but Kajol and Ajay always made an attractive pair on screen. Their quiet and slow-burn chemistry was unmissable right from their first film together — Hulchul, directed by Anees Bazmee in 1995. The two met on the sets of Hulchul and yet Kajol was not supposed to be a part of the film. The sudden death of Deewana actress Divya Bharti led to the role being recast, and Kajol was in.

Their next screen outing together was Gundaraj, directed by Guddu Dhanoa. Here, Kajol played a news reporter who helps Ajay’s character track down the real culprits  after being wrongfully accused of rape. While the film did not see commercial success, it brought the freshly-single lead stars together.

The real-life romance between Kajol and Ajay translated well on screen in both Ishq (1997) and Pyaar To Hona Hi Tha (1998).

The newly-married couple got back together for the family entertainer Raju Chacha in 2000. After a gap of about seven years, Kajol and Ajay reunited on screen for U Me Aur Hum, and followed it up with Toonpur ka Superhero in 2010. Nothing about the two films was remarkable, apart from the Kajol-Ajay chemistry.

In 2020, it was refreshing to see Ajay star opposite his wife in Tanhaji: The Unsung Warrior, after sharing the screen with a slew of young actresses. Even though her role as Savitri Bai was small, Kajol, as the strong, caring mother and wife, perfectly complemented Ajay’s Subedar Tanaji Malusare.

Off-screen romance and 23 years of togetherness

They might have met while filming Hulchul, but it was far from love at first sight. Both were in relationships with other people and when their friendship blossomed, both  broke up with their then-partners. Mostly keeping their romance out of the public eye, Kajol and Ajay dated for around four years, before tying the knot.

With Ajay’s preference to keep things low-key, the star couple held an intimate wedding, with their friends and family in attendance, at Ajay’s home in Juhu, Mumbai.  And right after, they went on a five-week-long honeymoon.

While shooting for the 2001 blockbuster Kabhi Khushi Kabhie Gham, Kajol got pregnant. She suffered a miscarriage around the time of the film’s release and was recovering in the hospital when the movie revelled in box-office success. The couple had another setback when Kajol’s second pregnancy ended in a miscarriage as well.

Kajol’s social media accounts have always been filled with posts of her children, while Ajay shares titbits about the family only on special and rare occasions.

Their love for the silver screen, each other and their children are not the only things Kajol and Ajay bond over. The birthday girl has been very open about what makes them click. She shared the secret to her “happily ever after” in this Instagram post.

Me: So what do you want to do today

Ajay: I don’t know what do u want to do

Ajay: Let’s just stay in and order some good food

And they lived happily ever after in pajamas…